The U.S. did not have to destroy its economy to accomplish this incredible fiscal improvement

In this week’s issue of Maclean’s, my column looks at some of the surprising ways the U.S. has emerged as a pillar of fiscal austerity, and to what extent that has aided or hurt the recovery. To go along with it I pulled together some charts to show how America compares to the U.K., a country which a few years ago purposefully set out to wage war on its deficit. America, instead, more or less backed into austerity in the form of bitter compromises between Democrats and Republicans that entailed tax hikes and spending cuts. Some charts also include data for Canada, which, in some cases, has been the least austere of the lot.

Let’s start with America’s deficit, which shrank rapidly in fiscal 2013. 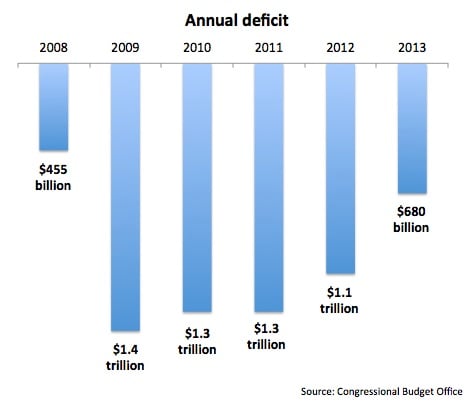 Remember, it wasn’t all that long ago some were predicting trillion-dollar plus deficits stretching out forever. Just this week the Congressional Budget Office estimated the U.S. posted a US$44 billion surplus in the month of December, compared to a US$1 billion deficit a year earlier.

But a better way to measure the deficit over the long term is as a percent of GDP, and this chart from David Rosenberg, chief economist at Gluskin Sheff, shows the U.S. is in the midst of the sharpest fiscal adjustment since the 1970s. As Rosenberg noted in a recent report: “Very few countries around the world have accomplished this — Greece and Ireland come to mind, but the United States did not have to destroy its economy to accomplish this incredible fiscal improvement.” 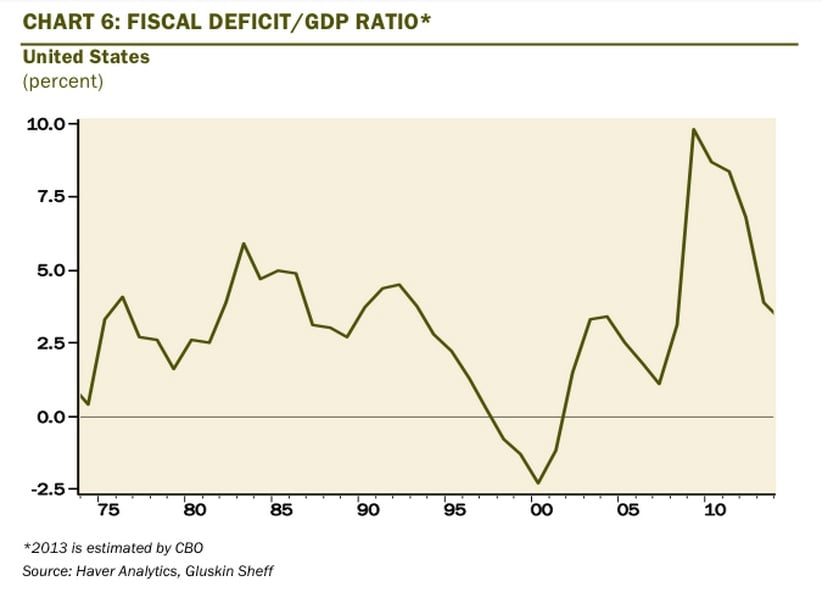 To see how the U.K.’s own pursuit of austerity has compared, I grabbed data from the most recent IMF Fiscal Monitor. (2013 and 2014 are forecasts)… 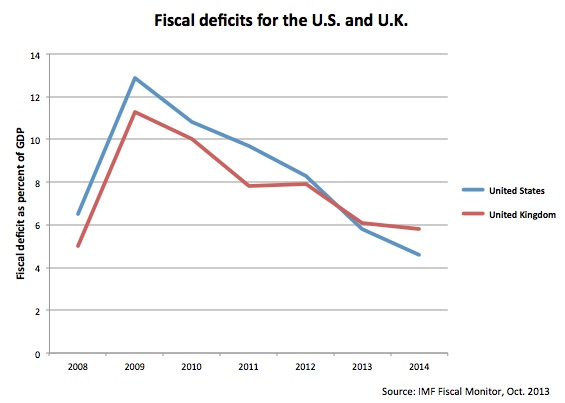 And below, with Canada… 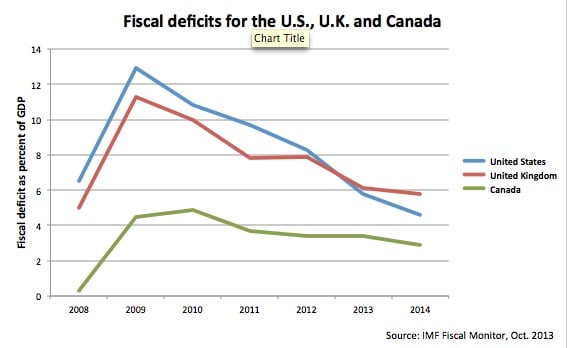 We started from a much healthier base, with a relatively minuscule deficit. And while it ballooned after the Harper Government cut the GST and launched its $60 billion stimulus plan, Canada’s deficit never grew to U.S. and U.K. proportions. Then again, it isn’t going away all that quickly, either.
Tax hikes have done a lot of the heavy lifting in reducing America’s deficit, but painful spending cuts enforced by the sequester are rapidly shrinking the size of the U.S. government. In fact, there has been no time going back to the 1960s during which U.S. spending continued to decline this many quarters into a recovery… 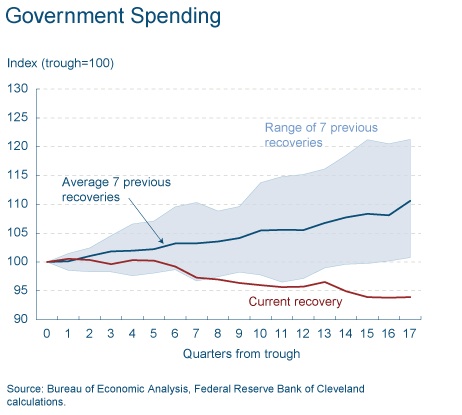 I’m not aware of a source to compare federal government spending across different governments, but the OECD tracks total government outlays (for all levels of government, and not just direct spending, but transfers, subsidies etc.) and once again, we see a much sharper drop in the U.S. than Canada since the recession. (This is as a percent of nominal GDP) 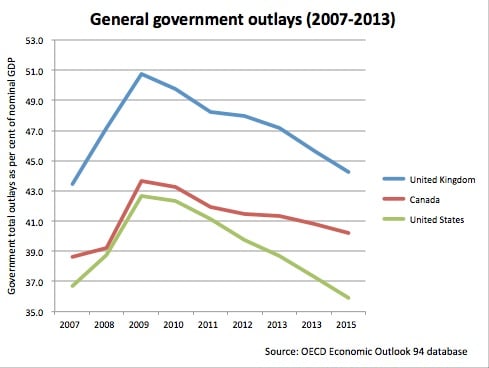 All those cuts have translated into an incredibly shrinking public sector workforce in the U.S. This chart reflects all levels of government–central, state and local. It flies in the face of claims the American public sector has unduly benefited from stimulus spending. 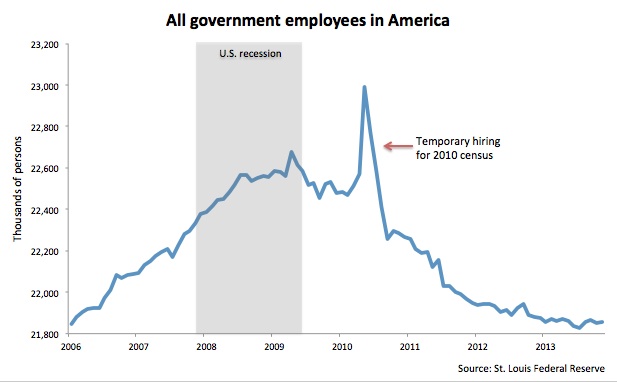 Again, I couldn’t find a single database to compare federal-only employment, so drew from various sources for this chart. No doubt there are differences in the what each country includes in its count of federal workers, but when employment levels are indexed against themselves, you see just how much Canada’s federal payroll swelled after Harper took office, and the trajectory since then. 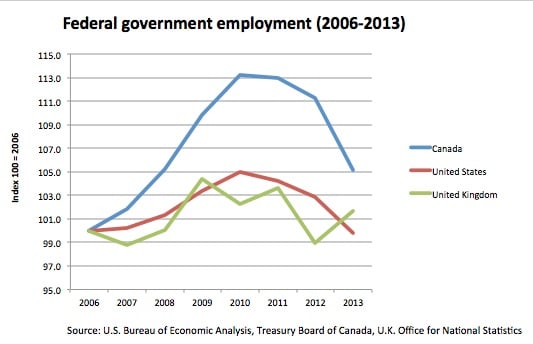 Don’t get me wrong, America faces a dangerous road ahead, what with the national debt at $17 trillion and rising. The country needs its economy to grow in order to bring its debt under control.

Yet here’s the thing. Despite the cuts to spending, the tax hikes and the shrinking public sector job market—despite all that—the U.S. economy has continued to grow and is on pace to outperform both the U.K. and Canada this year and next.

Now, here’s the question for you: Is America growing because of the cuts, or despite them?