Starbucks' latest bold plan, this time to fix youth unemployment, signals a good time to think about what businesses get out of doing social good 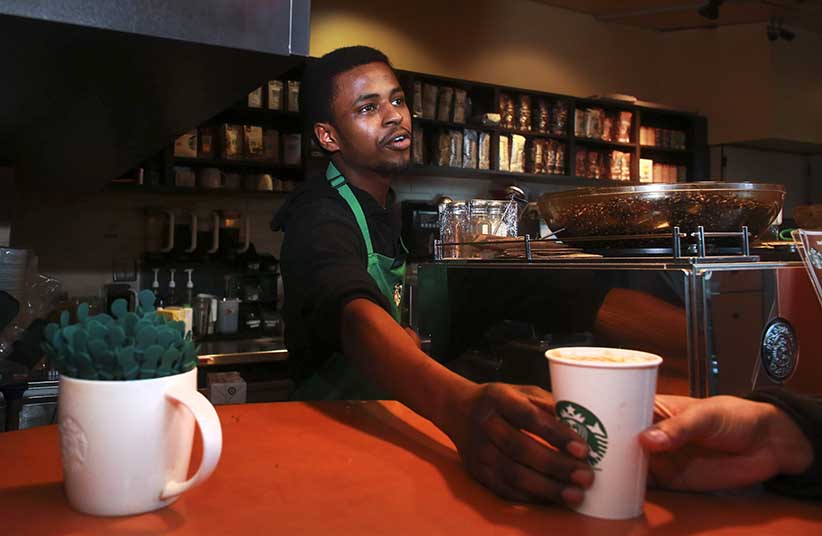 Bernie Sanders is a socialist long-shot contender for the Democratic presidential nomination. Howard Schultz is the billionaire CEO of Starbucks. Listening to them tackle America’s youth employment crisis, one might not know which is which. “We have to create a situation where our kids can leave school and live productive lives and not have them arrested and incarcerated,” one said. “The cost of youth disconnection—including health care, public assistance and incarceration—was $26.8 billion in 2013 alone. Quite literally, we can’t afford to do nothing,” said the other.

For the record, that last call to action came from Schultz, who on July 13 unveiled a plan by Starbucks and 16 other companies, including Wal-Mart, Microsoft and JPMorgan Chase, to give jobs, internships and apprenticeships to 100,000 young people over the next three years. With a name that could have been cooked up by the Obama White House—the “100,000 Opportunities Initiative”—and deploying the language of grassroots mobilization, it’s only the latest remarkable foray by big business into the public policy domain.

Everywhere you turn right now, giant companies are taking on some of America’s most deeply entrenched problems, from race to same-sex inequality to youth employment. There was, of course, Starbucks’ ill-fated “Race Together” campaign earlier this year, which sought to spark a national dialogue on race by having baristas write those two words on coffee cups, but came off as shallow instead. Other corporate-led campaigns, however, have been far more influential. In the wake of the church shooting in Charleston, S.C., Wal-Mart, Amazon and eBay quickly erased the Confederate flag from the marketplace, despite angering many in the deep South. And when a number of Republican state legislatures, including Arkansas and Indiana, adopted laws that would allow businesses to discriminate against gays and lesbians, Wal-Mart, Eli Lilly and diesel engine-maker Cummins, among others, were at the forefront of the fight against those laws. Earlier this year, close to 400 companies petitioned the U.S. Supreme Court to strike down state bans on gay marriage.

Somewhere, Milton Friedman is rolling in his grave. In the 1960s, the economist and free-market champion argued against mixing business with social measures: “Few trends could so thoroughly undermine the very foundations of our free society as the acceptance by corporate officials of a social responsibility other than to make as much money for their stockholders as possible.” And that type of thinking generally stuck, even as the mantra of corporate social responsibility became more commonplace in boardrooms. But, if the 2000s were about companies patting themselves on the back for remembering to turn off the lights for Earth Hour, what we’re seeing now is corporations overtly taking sides in some of the biggest debates of our times.

Now, let’s get one thing out of the way. On the matter of America’s youth unemployment rate—which, at 18.1 per cent, is nearly 3.5 times that of the broader population, with that gap widening—companies could have simply fixed things already by hiring more young people. But even here, the coalition of companies has framed the issue as part of a broader, systemic challenge facing the American economy—one which a politically deadlocked Washington has shown itself incapable of addressing.

So can Wall Street fix what Occupy Wall Street couldn’t? Corporations certainly have enormous resources to effect change where politicians and traditional activists might not; Wal-Mart alone had sales last year of $485 billion, greater than the total state expenditures of California, New York and Texas combined.

The bigger question is: Do we want them to? To date, there has been surprisingly little discussion about this. Well, actually, there has, but it’s only come up when companies have been on the regressive side of issues. (“I’m going to leave it to politicians and others to discuss social issues,” a chastened Chick-fil-A CEO Dan Cathy declared two years after the company opposed same-sex marriage and sparked massive protests.) So it seems that, as a society, we’re generally okay with corporate interference in the public policy arena, but only in certain circumstances. (And it should be said that corporate America will only go so far. Wal-Mart, for example, could probably turn the page on the gun control debate in the U.S. if it stopped selling assault rifles, but that doesn’t seem likely to happen any time soon.)

Ultimately, we shouldn’t lose sight of what is motivating companies to get involved: They think it will improve their bottom lines. As much as America remains sharply divided along partisan political lines, on some questions, such as gay rights and even race, there is a growing middle ground. Where once it might have paid to be agnostic on contentious issues, companies are increasingly aware—especially in the age of social media—of the brand-value benefit that comes with championing popular causes. You can afford to lose sales to a few bigots, if it means the masses think you’re on the side of the angels.