Are deficits the solution to low growth?

The Liberals are betting that deficits will boost growth. The low cost of borrowing means it won't cost us too much to see if they're right. 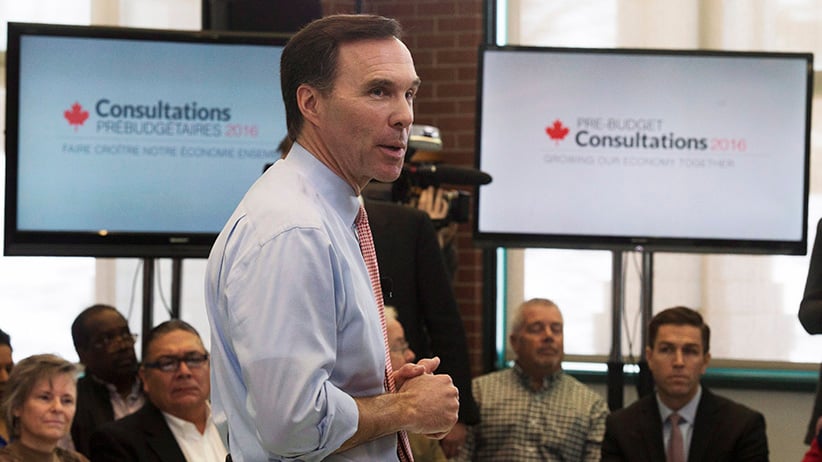 Finance Minister Bill Morneau revealed an update on the country’s finances on Monday morning at a community centre in the Ottawa suburb of Vanier. The numbers showed that new deficit projections have deteriorated compared to the last official projection in the fall update in November of last year. What does this deficit announcement mean, and what should we do?

What’s in the announcement

First, let’s dig into the numbers in the backgrounder provided with the announcement. The backgrounder informs us the deterioration of economic forecasts accounts for a $12.2-billion increase in the projected 2016-17 deficit. In addition, new spending on programs accounts for $2.6 billion. When you add it all up with the previously forecast small deficit, you get to a total projected deficit for 2016-17 of $18.4 billion. With this deficit, the debt-to-GDP ratio will rise from 31 per cent to 31.8 per cent before declining to 31.1 per cent in 2017-18.

One caveat is in order, though. The numbers released today were based on the average of private sector forecasts for economic growth in 2016-17. Minister Morneau did not just take this average forecast as his baseline, however. Instead, he lopped off an extra $40 billion (two per cent of GDP) from projected growth, which had the effect of increasing the projected deficit by around $6 billion. In other words, if you just went with the private sector forecast the projected deficit would only be around $12 billion. This gives the government a large buffer to ensure they hit their new deficit target.

What the announcement means

The Liberals have offered three anchors to their fiscal policy from the election through to recent days. First was the commitment to a $10-billion limit on the deficit for 2016-17. Second was the commitment to reach a zero deficit by 2019. Third was a debt-to-GDP ratio that declined every year. Morneau’s announcement on Monday means the government will likely miss on all three commitments. Does this matter?

In the long run, stable public finances require a stable debt-to-GDP ratio. The GDP measures the size of the economy, so our finances are stable so long as the debt is not growing more quickly than our ability to pay it. Allowing the debt-to-GDP ratio to rise when there is still growth (albeit small) in the economy should set off some warning bells. What if we were to fall into a recession because of some unforeseen shock hitting the economy in 2016 or 2017? If we are already allowing rising debt-to-GDP now, we will be less well-equipped to handle negative events in the future. So, we are off the ideal long-run path for debt-to-GDP.

But we need to ask: what does this deviation from the optimal path for debt-to-GDP actually cost us? Many commentators turn to anecdotes from the 1980s or 1990s, when deficits led us into a corrosive spiral of debt. The relevance of those anecdotes to today’s situation is hard to see. We are now in a world where the government of Canada can borrow using 30-year bonds that pay only 1.92 per cent interest. That means if we run up $100 billion in debt, it only costs us $1.92 billion to finance that new debt. We are in no danger of a public-finance-driven deficit-debt spiral, and we should simply dispense with anecdotes from previous eras as solid guides for policy today. Our problems today are different.

Another important factor is the long-run outlook for federal finances. According to the Parliamentary Budget Office, the long-run fiscal position of the federal government is not bad at all. Future fiscal problems lie in provincial capitals (because of health spending, mostly), not in Ottawa. So a slightly higher debt-to-GDP ratio should be less of a concern federally than provincially.

What should we do?

This fiscal situation announced by Morneau is approximately where we would sit no matter what government was formed after the Oct. 19 election. The deficit is largely driven by factors outside the current government’s control. Politicians in question period may work themselves into a lather assigning blame, but the truth of the matter is that today’s situation was a result of a decline in economic growth outside any federal finance minister’s ability to manipulate the situation.

In sharp contrast, what happens in the coming March 22 budget is very much for the Liberals to decide. If they continue with the plans outlined in their 2015 election platform, they will add at least $10 billion more to today’s $18-billion deficit, taking us close to $30 billion. That’s still only 1.5 per cent of GDP, but $30 billion is real money. And there will be no mistaking who is responsible from this point forward.

It’s worth considering for a moment if there are other choices we could make instead of the Liberals’ preferred path. The best way to see the choices we confront is to consider the top and bottom of the debt-to-GDP ratio. Should we focus on the debt part on top, or the GDP part on the bottom of the ratio?

Some commentators, like economist Stephen Gordon, see today’s low growth as something beyond our control; we more or less have to accept that we are in a low-growth era.  Gordon points to Canada’s labour market which already has fairly high national employment rates and he asks where the growth is going to come from, especially without big increases in labour productivity.

This “end of growth” idea appears outside Canada as well—American economist Robert J. Gordon (no relation to Canada’s Stephen) argues in a new book that the life-changing growth of the 20th century won’t be repeated in the 21st century.

If the professors Gordon are right, the only way to return to a stable debt-to-GDP ratio for Canada is to focus on the top part of the ratio—attack the deficit through spending cuts or tax increases.

On the other hand, economist Larry Summers argues in Foreign Affairs that running deficits can stimulate the economy—like giving a car battery a boost to get it going. Moreover, if these deficits are spent on things that expand the potential of the future economy, we can escape the low-growth scenarios. This would increase the bottom of the debt-to-GDP ratio through economic growth, and return us to stable public finances.

Myself, I’m not sure which side has the better argument. But, all indications from Monday’s announcement are that the Liberal government is going all in for the Summers solution. It will take a couple of years to observe if the Liberals are making the right call, but we’ll certainly know in time for the scheduled 2019 federal election. And with the low cost of borrowing it won’t cost us too much to see if the Liberals are right. For now, I don’t expect the Liberals to give up on their plans before they even give them a try—even if that means bigger deficits.