Are we better off with Harper?

A new Conservative ad says 'We're better off with Harper.' It's an awful talking point, but here are the numbers to put the claim to the test.

The tagline from the latest CPC ad is “We’re better off with Harper.” This phrase has a long history, going back at least to Ronald Reagan’s “Are you better off than you were four years ago?” in the 1980 U.S. presidential election. The CPC seems to think that that if asked, most people would say that they were better off than they were before Stephen Harper took power.

I hate, hate, hate these sorts of talking points. The proper question to ask is, “Are we better off than what we would have been if the CPC government had adopted a different set of policies?” In order to answer this question, you’d have to specify what the alternative policy strategy would have been, and work through what we would have seen under this counterfactual. (For more on this point, see here.) No opposition party has ever specified what they would have done differently over the past eight or nine years, so this kind of exercise is not possible.

But to the extent that the CPC will claim that the economy has improved under Harper and that the opposition parties will claim that it has gotten worse, here are some of the relevant data. Keep in mind that the changes are the result of a combination of what the Conservative government could control, and what it couldn’t. If you’re going to blame the CPC for the ravages of the recession, you have to give them credit for the boom years of 2006-07.

The point of comparison is between the latest available data and the last data point before the Conservatives took office in February 2006: January 2006 for monthly data, 2005 Q4 for quarterly data, and 2005 for annual data. All dollar figures are corrected for inflation.

[Updated to include federal debt numbers] 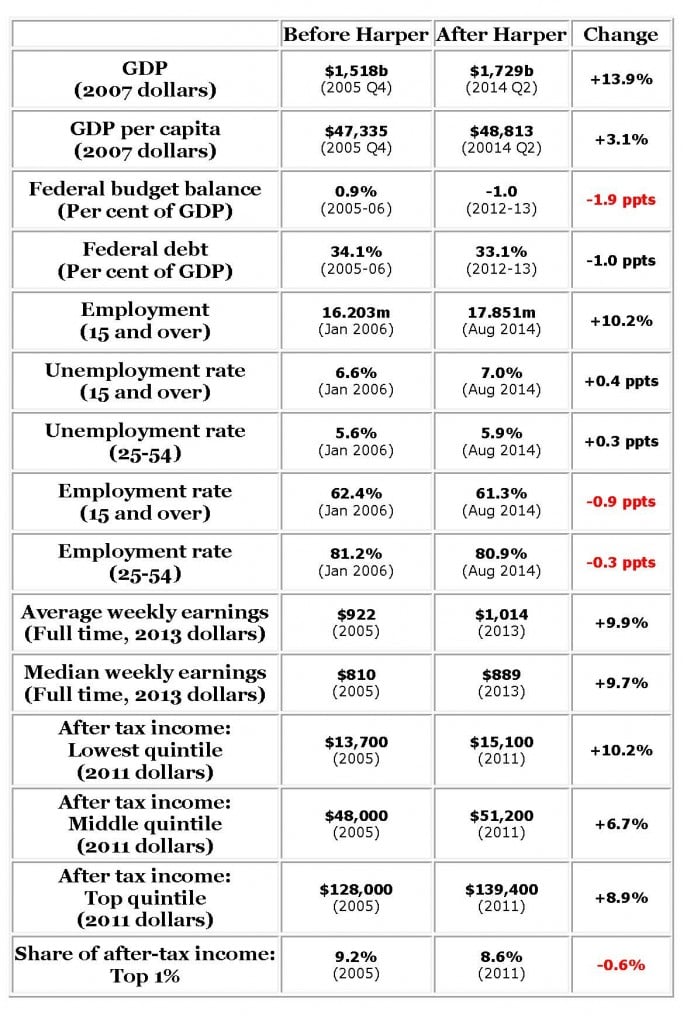