As the economy slows down, should austerity pick up speed? 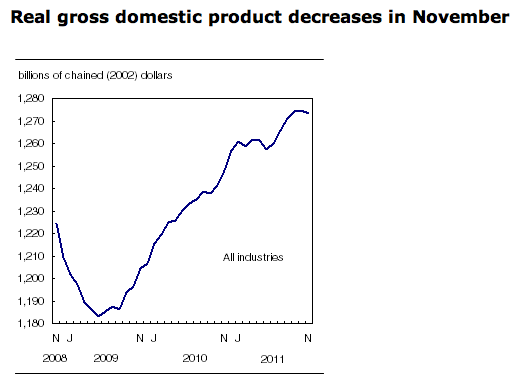 Canada’s GDP numbers for November came out this morning, and it was a rude awakening. The economy slowed down unexpectedly in November, with output dipping 0.1 per cent, as opposed to the consensus forecast of 0.2 per cent growth. “While it initially appeared that the Canadian economy smoothly decelerated late last year, it now looks like Canada stumbled as it approached the 2011 finish line,” CIBC quipped in a note.

Dragging down overall output was a 2.5 per cent drop in oil and gas extraction activity, possibly due to low oil and gas prices and softening demand for exports. Notably, construction in both the residential and non-residential sector was down 0.3 per cent. 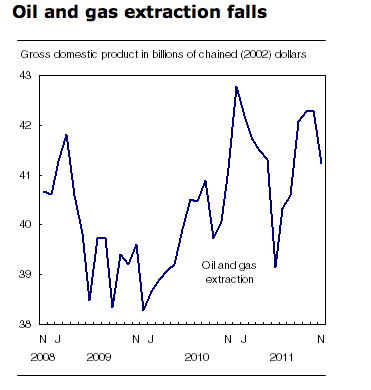 The November slowdown is expected to bring down quarterly growth from a projected two per cent annualized expansion. Recession–defined by economists as two consecutive quarters of negative growth–isn’t necessarily upon us. But with Europe teetering on the brink of fiscal disaster, global demand cooling, and the Canadian housing market possibly due for a downturn–which could shave as much as one per cent off of GDP, according to some estimates–is it really time for the Harper government to pull the breaks on public spending?

Another concern is that, with rates already at record lows, there’s little the Bank of Canada can do to soften the impact of deficit cuts with expansionary monetary policy. As Stephen Gordon noted yesterday, there are steep costs associated with introducing austerity at the wrong point of the business cycle.