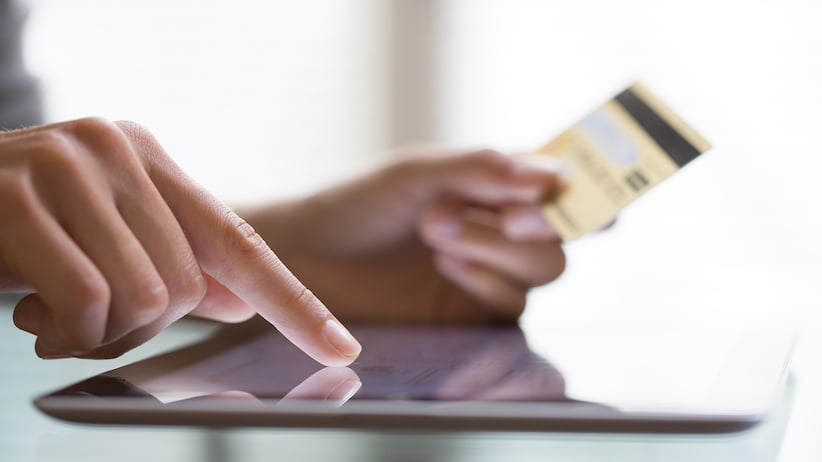 When Stephen Harper formed his first government in 2006, he didn’t immediately re-arrange all the furniture in the Income Tax Act. For example, he left alone the 2005 reduction in the lowest bracket (which had moved from 16% to the current 15%). Harper also implemented certain budget measures that been talked about, and even promised, by his Liberal predecessors. The Tax-Free Savings Account from budget 2008 (originally described in the 2003 Chrétien government budget) and the Working Income Tax Benefit from budget 2007 (originally promised by Martin’s government) both spring to mind as examples.

But budget documents are, especially in an election year, pieces of political architecture and so, to read budget 2015 you must suspend willing disbelief and accept that fiscal history as we know it began in 2006. Ok, so how have families done since 2006?

Well, individual median real employment income has been pretty flat even if there have been gains in total household income. Rates of low-income have likewise been pretty steady, but at least not really increasing. Market incomes for families with kids show a little more variety, depending on the family type (see chart below): steady for the two-earner parents, some losses and then big gains for 2-parent one-earner families and no real post-recession recovery for single parents. 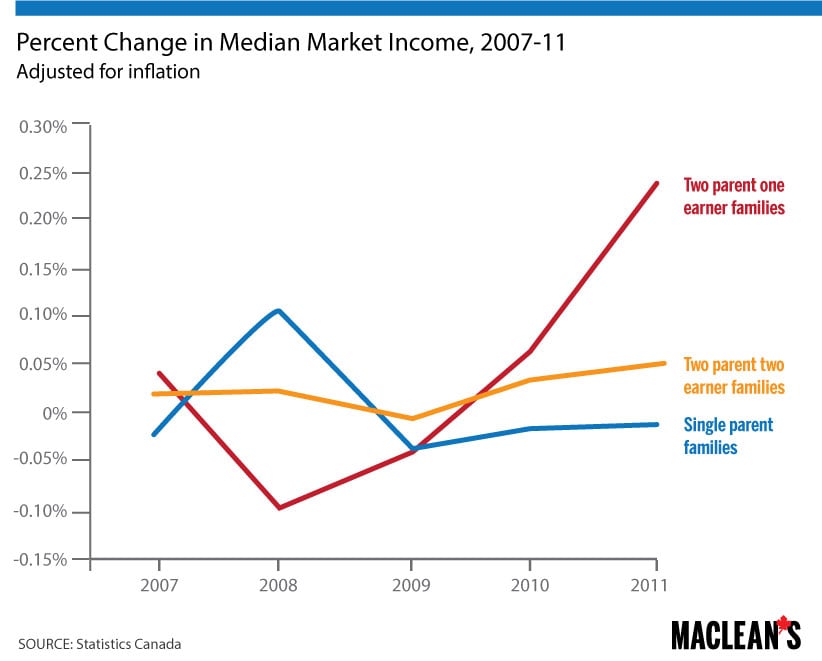 The budget communications strategy this year includes several profiles, created by Financial officials using administrative tax data, to illustrate the maximum potential benefit in tax credits and cash transfers. You can meet “Henry and Cathy” who have 2 school-aged kids and make $120,000 (split $84K-$36K) between the two of them (median employment income for 2-earner families with 2 kids is closer to $99,000). Or meet “Elizabeth” who is a busy professional and single mother of two younger kids who makes $45,000 a year which is about $15,000 higher than the median employment earnings of female single parents with 2 kids. Clicking through those profiles on the budget site, you won’t meet anyone homeless, or anyone with a disability or anyone who is clearly low-income or working poor. But that isn’t to suggest that this pre-election budget has nothing relevant to the everyday, hard-working Canadians who aren’t as well-off as Henry, Cathy and Elizabeth.

The Working Income Tax Benefit is an income-supplement paid to eligible taxpayers with low-incomes. It just might be one of the most promising ways to reduce poverty for working-age adults and some have recommended that it be significantly enhanced. Currently, it pays recipients an average of between $700 and $1,000 a year.

The Budget didn’t change the value of the WITB. Instead, it committed the government to “improving the take-up”. It turns out that people won’t always find the cash transfers governments offer them. Department of Finance officials suggested that about 15% of Canadians they think should be eligible for the WITB aren’t getting it but they aren’t sure why. Is it because these lower-income Canadians aren’t filing a tax return or is it because they are filing a return but aren’t completing the complicated WITB application in the return? The Government of Canada is now committed to finding out and will, presumably, get back to us when they know more.

As promised in their 2011 election platform, the Conservatives have indeed doubled the annual contribution ceiling on Tax-Free Savings Accounts from $5,500 to $10,000. The Budget is at pains to argue that TFSAs “provide greater savings incentives for low- and modest-income individuals”. And, at least as currently designed and compared to RRSPs, TFSAs can be helpful for small savers.

But then the Budget takes kind of strange turn by implying that doubling the TFSA room is going to help families make ends meet. They offer a graph (on page 235 of the document) that makes an effort to show that it isn’t the wealthiest who are maxing out their TFSA room (and will benefit from the new higher limit). There are, the Budget states, 2.7 million Canadians with a TFSA and nearly 60% of them have annual incomes of less than $40,000.

Some of this is because of the age profile of TFSA holders – they are disproportionately older and more likely to be living on a fixed (and therefore lower income, but some amount of assets). TFSA holders in the prime parenting years (35 to 44), those who, one supposes the government wants to offer more help in making ends meet, have median TFSA balances of just $5,000. They aren’t really in much danger of hitting the global contribution limit. But some in the highest net worth households might be. They have median TFSA balances twice that of average wealth Canadians.

The Budget projects an annual cost, through lower tax revenues, of about $220 million a year but it is mute on the implications for the sustainability of Canada’s universal seniors’ benefits. You see, the main benefit of TFSAs for low- and modest-income Canadians is that they don’t get penalized for saving for their retirement through claw-backs of the Guaranteed Income Supplement. This means that future payouts of seniors benefits will grow a little with the TFSA. Canada’s Chief Actuary has already pronounced the GIS system sustainable under the existing $5,500 limit, thanks in no small part to the Prime Minister’s surprise move to gradually increase the age of eligibility. It’s unclear whether doubled TFSA room might demand some further changes to seniors benefits.

The Budget is changing the withdrawal rules on Registered Retirement Income Funds for the first time in over 20 years. The formula used to determine how much a RRIF-holder must withdraw is being revised to spread those savings over a longer period of time. Instead of taking out 7.38% (and then a larger percentage each year) at age 71, the new rules will slow the withdrawal to start at just 5.28% instead.

The move will likely be welcomed by many seniors who opt for the RRIF instead of buying an annuity. To the extent this helps those with small RRIFs hang on to their savings for longer, this could be helpful for adults who never had high incomes in their working life and accumulated smaller retirement savings. At least they will have a little more choice over when those savings run out.

For those at the other end of the lifecourse, the experience of low or modest-income during the post-secondary years is, thankfully usually temporary even if student loan debts can linger. Youth from lower and modest income families haven’t quite caught-up to their wealthier peers in their rates of enrolling and completing higher education and it’s not clear how much the measures in Budget 2015 will do to change any of that.

The other major education finance measures in the Budget lower the threshold on what parents are expected to contribute to their child’s education and raise the threshold on what student borrower can earn while in school. Both of these measures will mean larger Canada Student Loan amounts awarded to borrowers. For kids in lower income families who are already debt-averse, it’s unlikely this change will do much to encourage them to think about higher education but middle and upper-middle class parents might feel some relief from the “KIPPERS” phenomenon (kids in parents pockets eroding retirement savings).

There are a few measures in the Budget that will have an impact on the affordability of housing in Canada.

The Budget mentions $2.3 billion per year over the next 4 years for affordable housing. It’s not quite the affordable housing strategy advocates have been calling for, but it’s something. From the text that follows, it seem like this is repackaged money already allocated for the Homelessness Partnership Strategy, Canada Mortgage and Housing Corporation programs and First Nations housing.

For older Canadians and those with disabilities, there is a new tax credit, inspired by the temporary Home Renovation Tax Credit created as temporary stimulus for consumer spending during the recession. The new credit will let an eligible tax payer claim a 15% non-refundable credit spending to make their home safer and more accessible, up to a limit of $1,500 off their federal taxes. For senior homeowners who need to make changes to their home to age in place, this is probably an attractive new credit. But it won’t do much for seniors or persons with disabilities living in rental housing or eligible homeowners who don’t have the cash flow to front the renovation cost.

This Budget follows through on the 2013 budget’s promise to create new comprehensive code to protect consumers of financial products and services in Canada. Well, sort of. Details to follow.

The government spent some time consulting with the stakeholders and the budget seems to reflect some of what they heard from groups representing lower and modest-income Canadians. The Budget promises to deliver a new code that will protect vulnerable consumers (a phrase usually meant to include persons with disabilities, low-income Canadians and seniors).

The details of the new code – to be enshrined in the Bank Act –will come later, in the Budget implementation legislation, but the list of acceptable identification to open a bank account will be expanded. We may be in for another round of debate about “vouching”, similar to the Fair Elections Act. Or maybe we won’t. We’ll have to wait to see what could be the largest budget implementation omnibus legislation ever tabled in the House.

Whatever goes into the new code, the arm’s length agency charged with monitoring compliance, the Financial Consumer Agency of Canada, is not getting any new resources.

If Canadians aren’t applying for the WITB, feel confused by the sheer volume of boutique credits or aren’t sure about their consumer rights at the bank, the government will happily point them towards some financial literacy education.

The Budget enthusiastically announced a new $10 million 5-year national Financial Literacy Partnership fund to provide grants to eligible community organizations working to boost the financial literacy of Canadians. The money is all private sector bucks, outside of the levies and fees they pay to the FCAC. Details on who decides who controls the fund are yet to be determined.

Perhaps some of the money can be used to help voters make sense of the creative accounting that sees a $3 billion contingency fund downsized to show a small surplus.

You’ll note the absence above of any discussion of the Family Tax Cut, the signature piece of the government’s October announcement. We already knew that the income-splitting credit was for “Henry and Cathy”, not “Elizabeth” and certainly not the lower-income Canadians who aren’t like either of those fictitious profiles. The new seniors housing tax credit appears to be the only brand new boutique personal income tax credit – the rest were all unveiled last Fall.

It’s not that there is nothing at all in this Budget for Canadians with lower and modest incomes, but the text is awfully thrifty. For a government thinking ahead to an election, they clearly put the emphasis on boutique measures aimed at the upper-middle class and did so early on. We’ll find out in October if it pays off.