Despite the record number of immigrants who came to Canada in the last year, it is not nearly enough to fill the gap left behind by retiring baby boomers 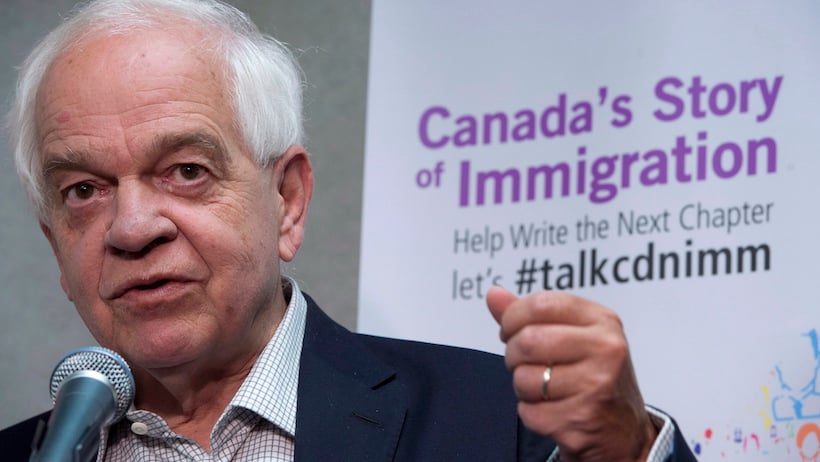 We’ve known since the Trudeau government was elected last year that 2016 would bring with it one of the largest influxes of immigrants in modern Canadian history. Now we have the numbers to back it up. According to Statistics Canada, the country took in 321,000 immigrants in the 2015-16 year, the largest number of newcomers in a single year since 1910.

That sure sounds like a lot of new Canadians—more people to work, to buy homes, to reignite the Canadian economy. Which is more or less the pitch that Canada’s Immigration Minister John McCallum has made of late in building the case for higher levels of immigration. “Canada is an aging country, so we are in need of new blood,” he said recently. “Canadians aren’t having enough babies and so the labour force growth depends very much on the entrance of immigrants.”

Here’s the problem with that.

The chart above is an update (and slight modification) of one originally produced by University of Laval economist Stephen Gordon five years ago. It shows Canada’s population, by age, in 2016, with the new immigrant population layered on top. Despite the larger number of immigrants who arrived in the last year, their contribution to Canada’s population is still small compared to the gap in the working age population left behind by retiring Baby Boomers.

How small? The shortfall in the prime working age population, those aged 20 to 50, is around 2.2 million people. In other words, that’s the number of people missing from Canada’s economy as population growth slowed after the baby boom, which peaked with those aged 53.

If every immigrant that Canada brought in was in that 20 to 50 age range, and if the country were able to maintain the level of immigration it did this year, it would take roughly seven years to make up for the gap behind the Boomer peak, all things being equal. But of course, not all immigrants are in that age group. As the chart also shows, growth in Canada’s working age population is about to drop off significantly as that hollow of under-20-year-olds edges into their working years. This all means that even more immigrants will be needed to fill the gap.

This isn’t to say immigrants can’t mitigate the effects of Canada’s aging population. This country’s ability to absorb people from diverse cultures is an advantage remarkably few other nations enjoy.

There’s a problem here too, though. New immigrants don’t fare well in Canada’s job market. The unemployment rate among immigrants who landed in Canada within the last five years has, on average, been more than double that of Canadian-born workers over the last decade. Those who came between five and 10 years ago are a bit better off—their unemployment rate is about 1.5 times higher. It’s only among immigrants who’ve been in the country for more than a decade that the gap with Canadian-born workers is erased. It shows that even if Canada ramps up the number of newcomers it accepts, their performance in the labour market will surely lag for years.

The experience over the last year with the influx of more than 30,000 Syrian refugees, who are included in this year’s higher immigration count, has shown how challenging it is to quickly integrate large numbers of people. So too has the backlash in Vancouver against homebuyers from mainland China (and the murky question of who is a foreign buyer and who is a genuine immigrant) even as Canada works to double the number of visa offices in that country. Meanwhile, Canada may pride itself on being more open and tolerant of immigrants, especially in contrast to the ugliness going on in the U.S. and Europe, yet internal polling carried out by Immigration Canada shows one quarter of Canadians feel immigration levels are too high as it is. The news of this year’s immigration boom does not sit well with them.

Which is silly, really, because despite that headline-grabbing number of new immigrants, their number works out to just 0.8 per cent of Canada’s population, or 0.1 percentage points higher than the average of the last 20 years. Some boom.