The recovery has benefitted older workers over young 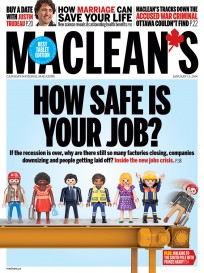 In this week’s issue of Maclean’s, on stands now, senior writer Chris Sorensen looks at the grim state of Canada’s job market. Nearly half a decade after the recession officially ended, companies across all sectors have been handing out pink slips at a troubling rate, while the jobs that have been created over the past year have tended to be part time positions.

This, of course, flies directly in the face of the Harper government’s claims about Canada’s strong economy and robust job market. Yes, as the prime minister is fond of saying, Canada has created more than one million jobs since the worst of the recession, but as Unifor economist Jim Stanford pointed out recently, Canada’s working population grows in excess of 350,000 each year. Simply put, there are a lot more potential workers now than there was during the recession. As such, a better gauge of the job market is the employment rate, which captures how many working age people are actually employed. By that measure Canada’s job market has yet to even claw its way back to where it was in 2003, as shown in this chart from our cover story. 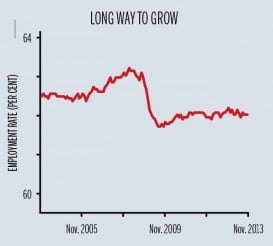 But even then, that doesn’t tell the full story of how ugly the employment picture is for some. Here’s the employment rate, broken down by the age groups available through Statistics Canada’s CANSIM database. We’ve experienced a wildly uneven recovery. 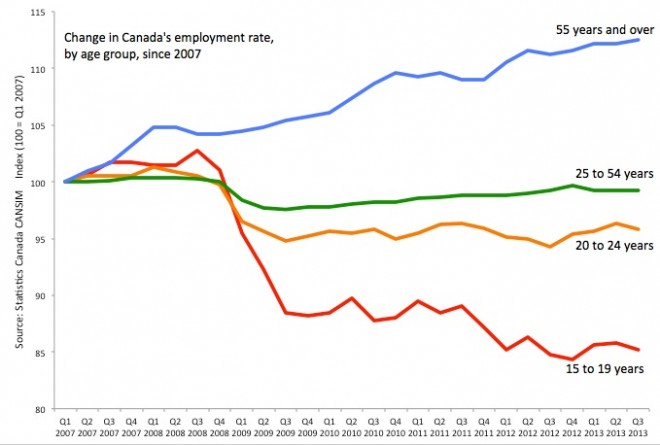 While the job market for those in the large 25 to 54 age group (accounting for 66 per cent of workers) is close to finally returning to its pre-recession level, the bookend generations have been flying off in opposite directions—employers are tapping older workers, while those 24 and under have seen their prospects worsen.

This reflects a few things. The recession crashed the retirement dreams for many boomers, meaning more of them are having to postpone their golden years. On the younger end, CIBC put out a report recently that found teens have been displaced from their traditional jobs in retail sales and restaurants by workers aged 19 and up. That still doesn’t explain the drop in employment for workers in the next age group, 20 to 24, though—those coming out of college and university trying to find work. This group accounts for one in ten people in the workforce, and their employment rate has fallen from close to 72 per cent in 2007 to hover around 68 per cent today.

Our cover this week asks How Safe is Your Job? For younger workers, it’s getting harder to find one in the first place.