Canada needs its private sector to start hiring, and soon. The public sector can't carry the weight on its own. 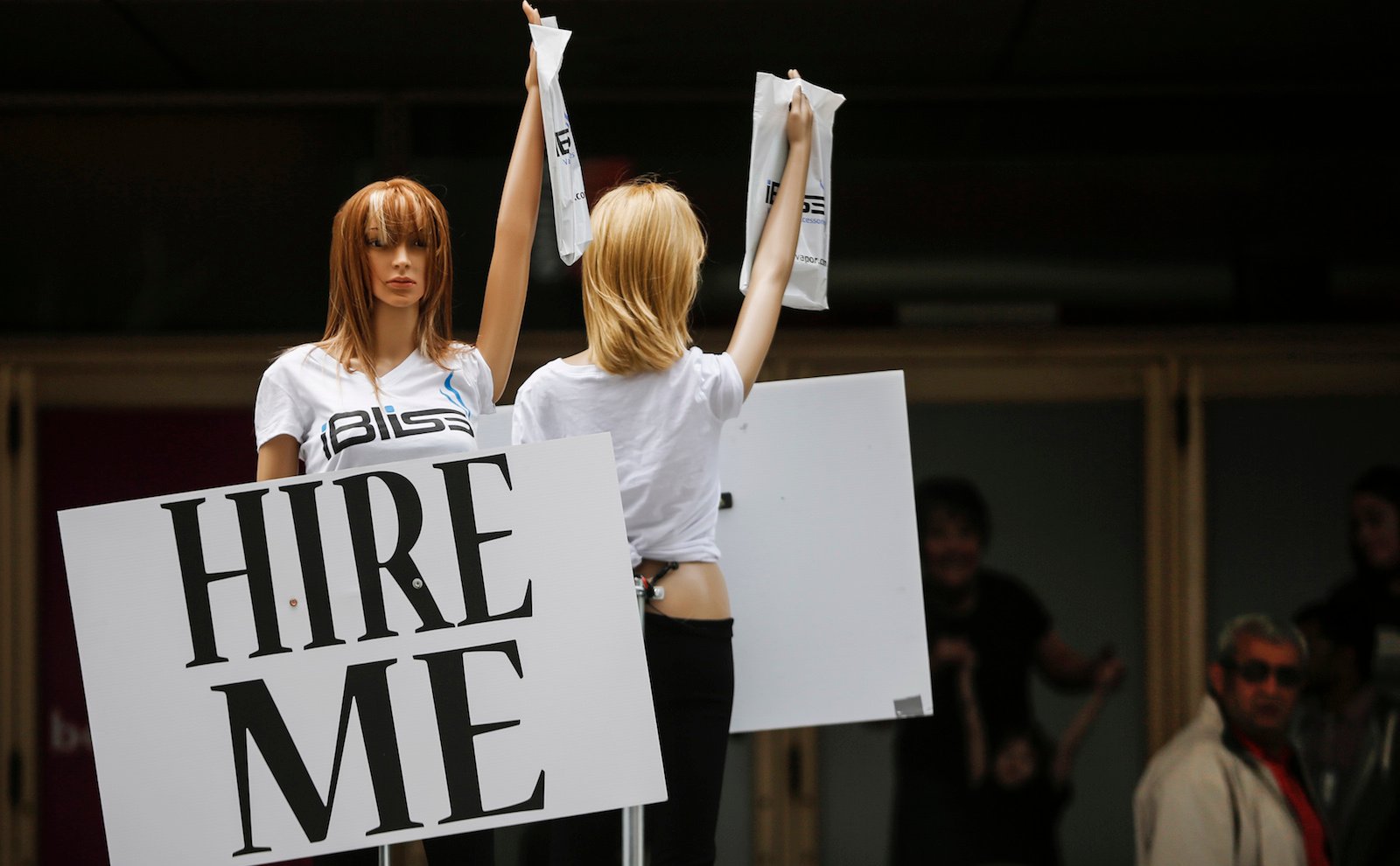 Friday’s jobs report for the month of June was a mixed bag. On the one hand, the economy shed 6,500 jobs, but that was less than the 10,000 job losses that had been forecast. The decline was also the result of a steep drop in the number of part-time jobs (-71,000) which was nearly made up for by full-time positions (+65,000). The unemployment rate stayed unchanged at 6.8 per cent.

So there was something in there for both the bulls and the bears.

But beyond the focus on June’s top line number lies a disturbing trend: the private sector is stumbling badly. To keep things simple, let’s take a look just at Canada’s four biggest provinces, which together account for 87 per cent of all jobs in the country. These charts show how public versus private sector job growth compares in each province, starting with the end of the recession. Note, these are not absolute values, but instead show the change in the number of jobs relative to April 2009. 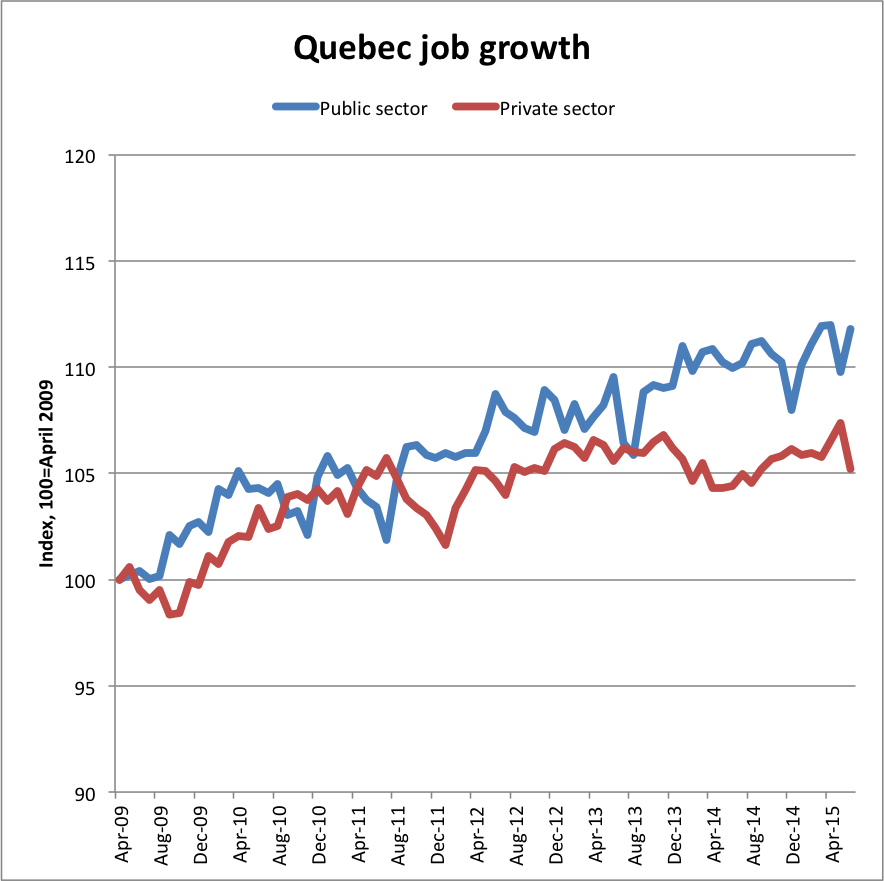 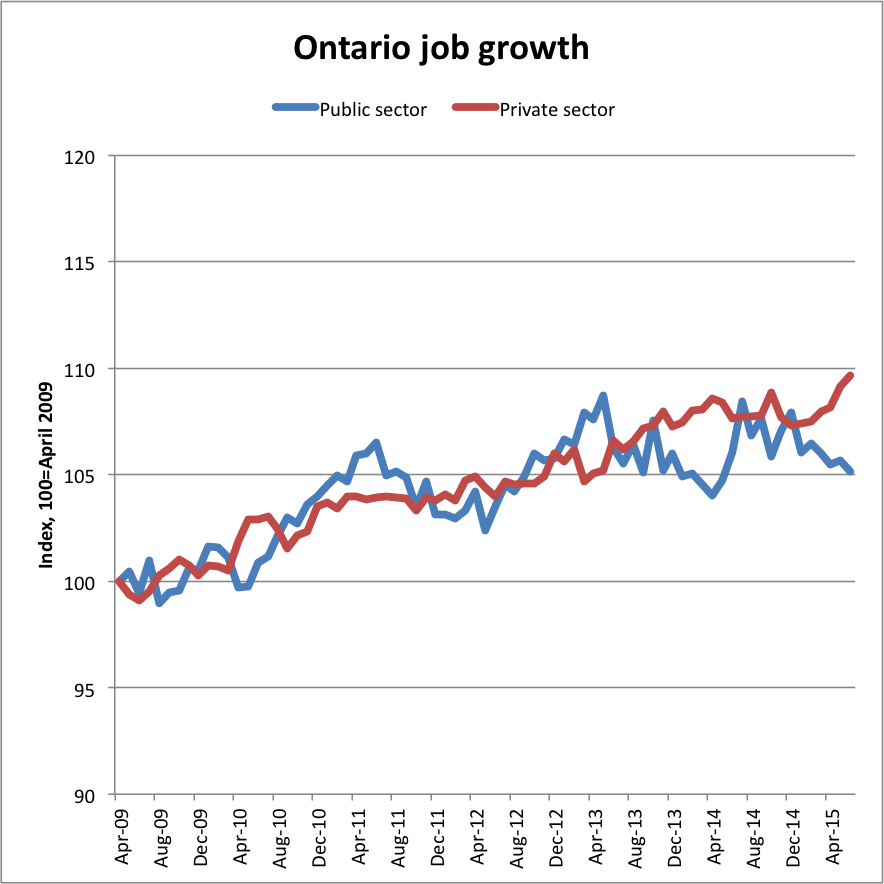 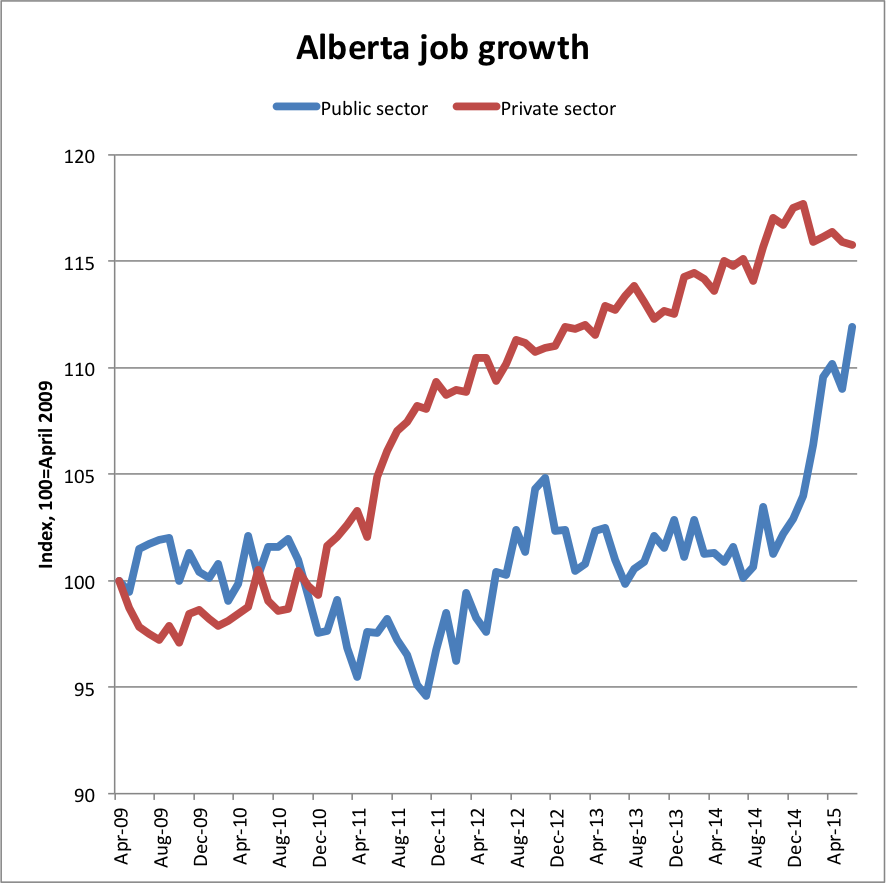 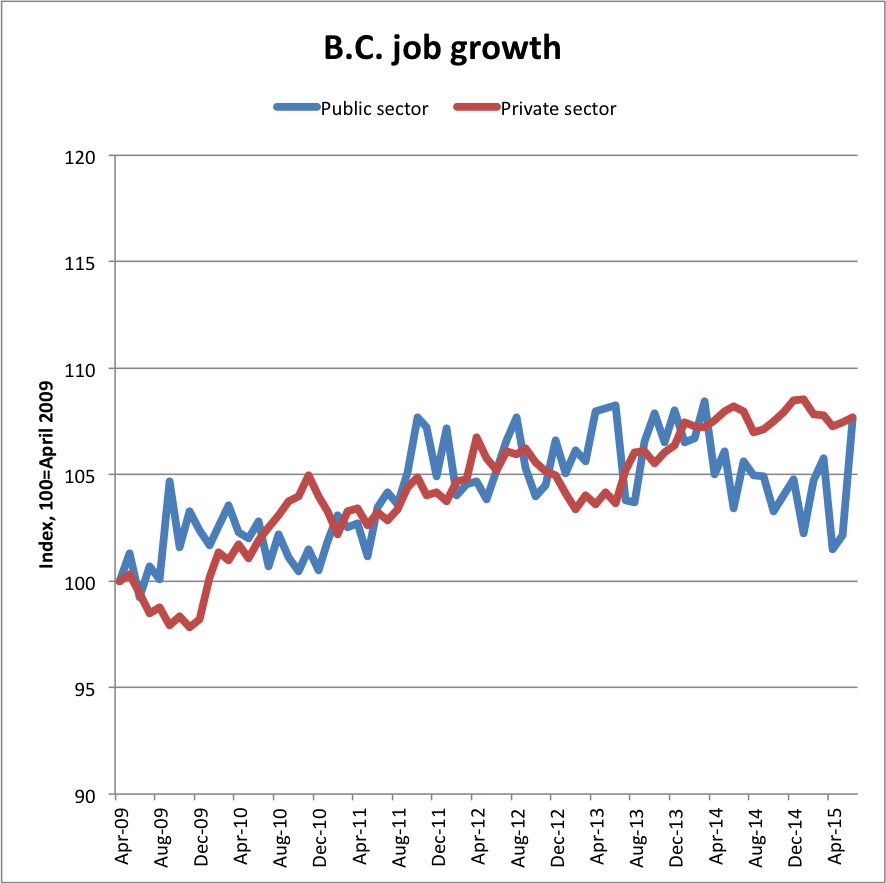 The main story these charts tell is of a private sector in retreat in Canada’s largest provinces, save for Ontario, the only province of the four where private employers added more jobs than they cut in the first six months of the year.

As remarkable though, is the surge in public sector employment in Alberta. Now, before you even say it, no, this is not because Alberta has a socialist government. NDP Premier Rachel Notley was only sworn in at the end of May. The sharp rise in public sector employment began under the Progressive Conservatives, and it explains how the province has managed to weather the downturn in the energy sector as well as it has.

With Canada’s economy looking shaky, some will argue a boom in public sector jobs is exactly the medicine the country needs. Okay, but if that is part of a long-term trend of public sector growth outpacing the private sector, you’ve got a problem. And there’s evidence to show that’s the case.

Last month the Fraser Institute released a study showing that for the decade between 2003 and 2013, public sector employment in Canada grew by 22.6, compared to 10.7 per cent for the private sector. As a result, the number of people working for federal, provincial and municipal governments and agencies as a share of total employment rose in every province except Newfoundland. 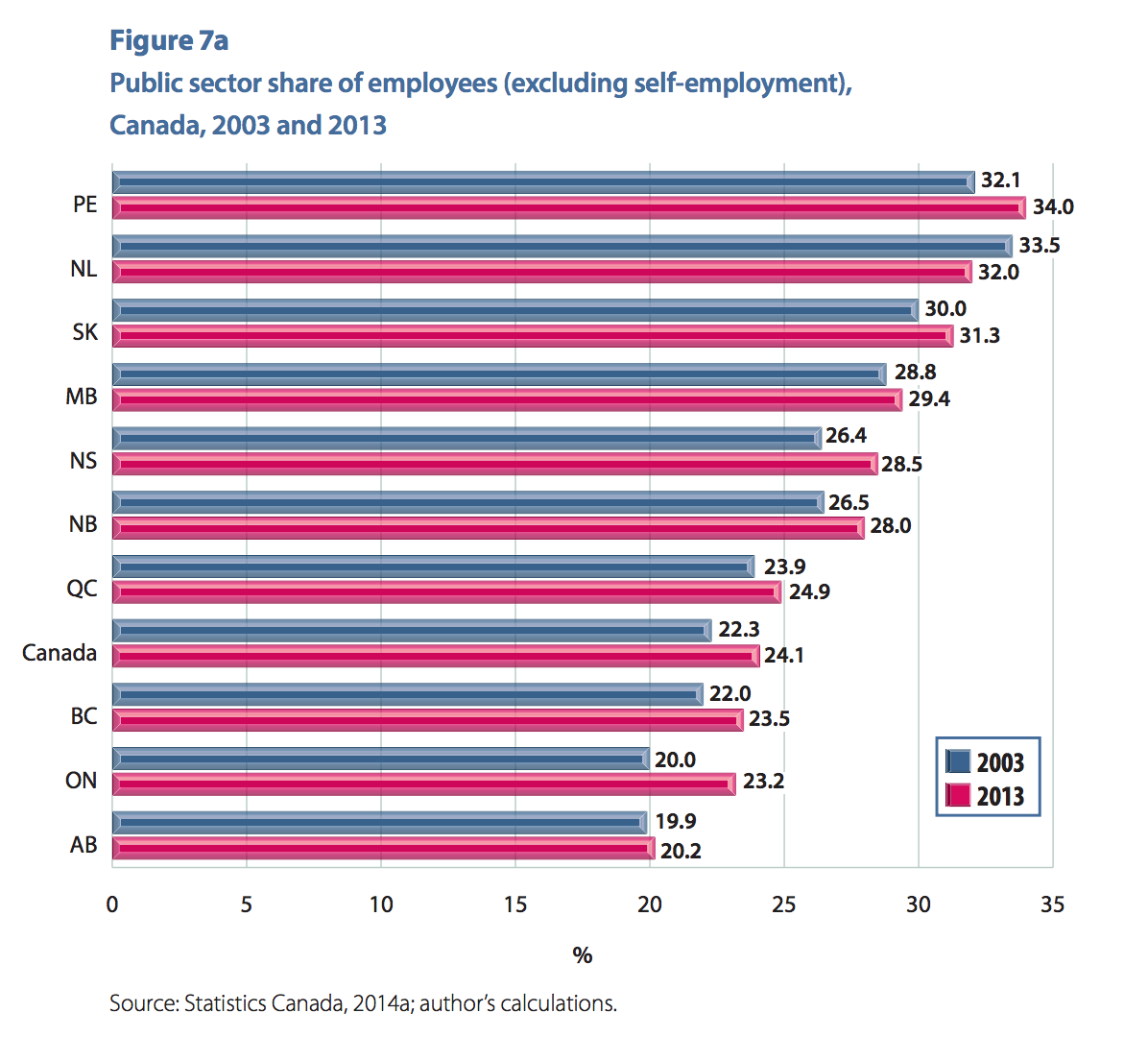 The problem is that to pay for public sector jobs, governments depend on tax revenue from the private sector. Otherwise: Greece.

There was another chart in the Fraser report that suggested the balance between public and private had started to improve. 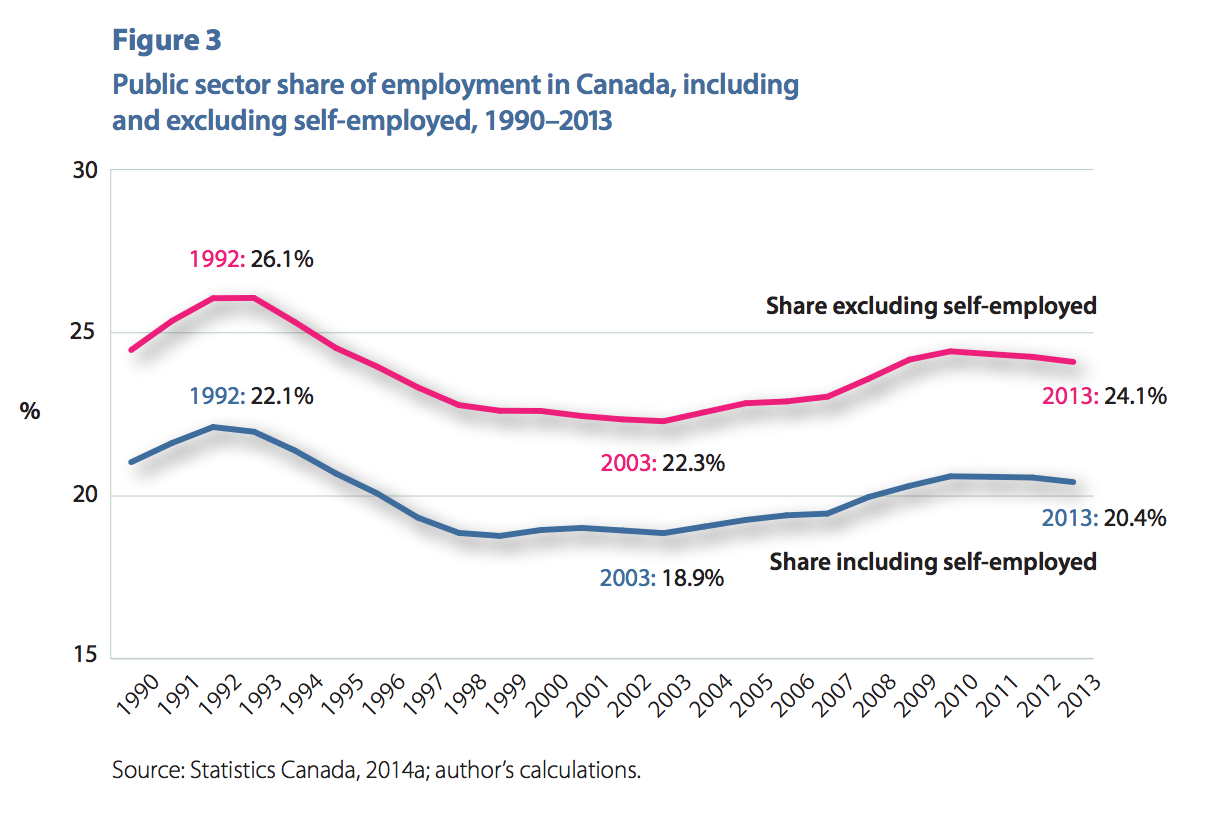 In fact, the public sector accounted for 23.5 of employment in 2014. However, since the start of the year that percentage has been on the rise again, nearing 24 per cent.

Canada needs its private sector to start hiring again, soon. The public sector can’t carry the weight on its own.