Canadians pile up debt faster than anyone in the world

Econ-o-Metric: The risks are rising as Canada's borrowing binge accelerates

Canada is piling up private debt (households and corporations) faster than any other developed economy, according to a new report by David MacDonald, an economist at the Canadian Centre for Policy Alternatives. Canadian households and companies have added debt worth $1 trillion since 2011, pushing the total to $4.4 trillion, or 218 percent of gross domestic product.

The trend: We like it when The Economist calls us cool. But in its latest issue, the magazine noticed something else about we Canadians: our addiction to debt, noting in one of two articles on the subject that Canada’s burden is among the “highest anywhere.” The warnings are piling up. Recently, the Bank for International Settlements observed Canada and China were at the greatest risk of financial crisis because of debt and excessive house prices. The International Monetary Fund worries that Canada has done too little to deflate its real-estate bubbles. At home, the Financial Consumer Agency of Canada warned about the implications of the surge in home-equity lines of credit. MacDonald’s study adds to list, noting not just the pace of the increase but cautioning that corporate debt is climbing as well.

Glass half full: Where MacDonald sees C-suite recklessness, others might observe smart management. The Canadian Centre for Policy Alternatives is non-partisan, yet it is proudly skeptical of the motives of big companies and conservative politicians. MacDonald notes that Canadian companies have been using debt to finance an impressive run of mergers and acquisitions, a shopping spree he describes as “asset speculation, rather than long-term productivity growth.” Executives in recent years have been too keen to borrow at ultra-low rates to repurchase shares, and to grow by purchasing rivals rather than organically. But neither practice necessarily imperils the company. It must also be said that debt also has kept the economy from collapsing, at least so far. Canadian retail sales increased 3.6 percent through April, the best start to a year on record, according to reports today.

Glass half empty: The pace at which Canada became one of the world’s most indebted countries is alarming. Canada’s private-debt-to-GDP ratio increased 20 percent in five years; the next fastest was Australia, at 14 percent. (The U.S.’s was little changed.) Speed matters because Canadians haven’t been accumulating income at the same rate, and much of their wealth is contingent on the value of assets such as houses and equities staying high. If those values reverse, or the economy stops growing and adding jobs, households and companies would be left holding assets worth less than what they owe their creditors. MacDonald says his survey of historical data suggests five-year growth in the private-debt-to-GDP ratio of 17 percent is a “tipping point.” If he’s right, it won’t take much to knock the economy on its side. 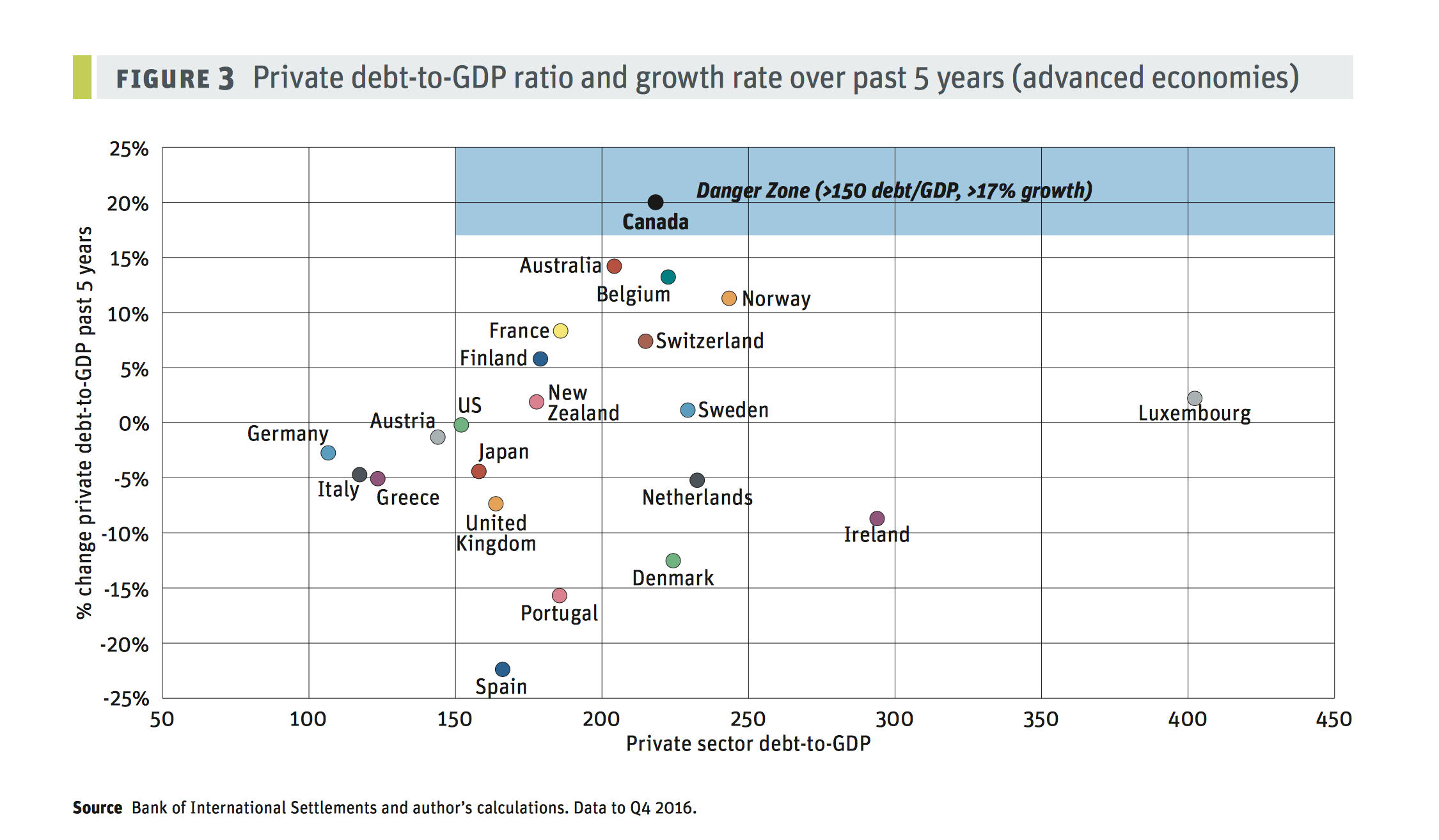 Bottom line: Past isn’t prologue. Maybe Canada will find a way to balance economic growth based on consumption and record levels of debt. But MacDonald’s study — and those that preceded it in recent months — suggests that policy makers shouldn’t count on that. He makes a point that tends to be forgotten: Canada’s political obsession with balanced budgets is part of the problem. One of the reasons private debt has grown so much since the crisis is the government of Stephen Harper did too little to stimulate economic growth. In effect, Harper may have balanced the budget by pushing the burden onto households. The decisions taken in Ottawa and the provincial capitals matter. By MacDonald’s thinking, policy created this problem, and policy likely will have to solve it.  That means calming the real estate frenzy and getting less uptight about deficits.