Candy Crushing it in the new economy

With Candy Crush Saga on track to generate more revenue than BlackBerry, the mobile gaming market is booming

Of the many claims Jim Balsillie once offered as to why BlackBerry’s future still looked bright a few years ago, none was as off-base as this one from 2010: “There may be 300,000 apps for the iPhone and iPad, but the only app you really need is the browser.” The way the former CEO saw it, apps were a sideshow for the real potential offered by mobile technology, in particular, his company’s doomed Playbook tablet, which he was flogging at the time—instant access to the Internet, anywhere, anytime. So it’s a safe bet Balsillie could never have imagined a time when a single downloadable gaming app, featuring brightly coloured bursting candies, might overtake his old haunt in sales.

If their trajectories continue as they have for the past two years (that’s a big assumption, but let’s stick with it for now), King Digital Entertainment, the developer behind the highly addictive Candy Crush Saga game, is on track to generate more revenue than BlackBerry. King, based in Ireland with roots in Sweden, is wildly profitable, too. It earned US$159 million last quarter alone. 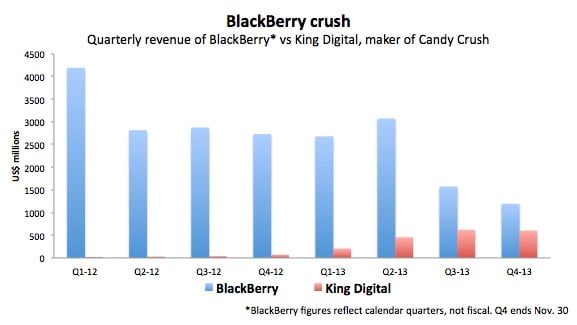 Details of King’s finances were made public on Feb. 18 when it filed IPO documents with regulators to raise US$500 million and list its shares on the New York Stock Exchange. Based on King’s own estimate of the fair value of its existing shares, that would make the company worth US$5.5 billion.

Cue the backlash. Within minutes of the IPO announcement, analysts, bloggers and the business press unleashed what has come to be the three stages of incredulity accompanying most tech IPOs these days: 1) You’re kidding me; 2) How is this sustainable!? and 3) The stock market has gone nuts!!!

Spend a few minutes reading King’s preliminary prospectus and, indeed, there is a lot to be skeptical about. While King boasts owning a catalogue of 180 games, there are only a handful anyone regularly plays, and only one that really matters right now. Candy Crush, a “match-three game” in which users attempt to line up coloured sweets, which then promptly explode, accounts for 78 per cent of King’s business. And while that game attracts 100 million so-called daily active users—yes, three times Canada’s entire population—just four per cent of those cough up any cash to play. Players start with five lives and, once they run through them, they must wait 2½ hours for the lives to refresh—or pay 99 cents for a new batch. It’s a testament to the insidiousness of the game that players did just that 1.5 billion times last year. The problem is, as King admits, interest in older games such as Candy Crush is “seasoning”—a charitable way to say it’s losing its viral charm. King must either find ways to rejuvenate interest in that game, or develop the next big hit.

So you have a company built on producing something customers have an intensely passionate relationship with for a limited time, which must then be supplanted with another blockbuster. That’s not a crazy business model. It sounds a lot like a Hollywood studio, in fact, and they’ve been around for a century now. But Hollywood could only ever dream of the level of engagement that viral game-makers have with their players, or an audience that’s so willingly captive and eager to be targeted.

We spend incredible stretches of time on mobile devices. Flurry Analytics, a Silicon Valley firm that measures app usage, produced a report last year that found the average U.S. consumer devoted two hours and 38 minutes to mobile devices each day. Of that, the largest chunk—nearly an hour—was in playing games. Tied for second, at 28 minutes, were surfing the web and Facebook.

Suddenly, the goofy, time-wasting online gaming market is being recognized for the huge business opportunity it is. So can King succeed where others have stumbled? It’s not the first developer to follow a viral hit to the stock market. In late 2011, Zynga, riding the popularity of its Farmville simulation game, went public at $11, only to see its shares slump to below $5 for most of the time since, as interest in the game waned. Angry Birds, another wildly popular game, has also lost some of the hype it once had, though the Finnish company behind the game, Rovio, just last week signed with Sony Pictures Imageworks to animate a movie for release in 2016.

It could be that random developers will continue to be the source of viral games in the future. Or it could be that, until now, no company has had the resources that King will have in order to emerge as the MGM, Universal or Warner Bros. of the mobile gaming world. Even before its IPO, King already boasts a US$400-million war chest.

Who’d have thought the key to mobile success in the new economy would be found in exploding candy and throwing birds at pigs?

Someone should have told Balsillie.