Central bankers: A new dismal normal is upon us - Macleans.ca 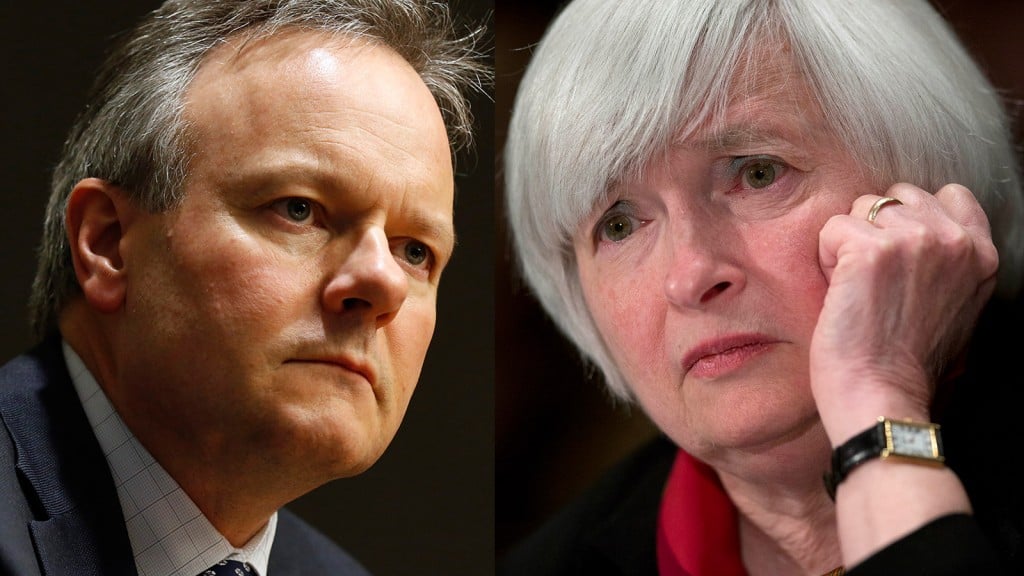 After North American central bankers waxed philosophical about the future path of interest rates last week, most of the focus has been on the apparent divergence of Canadian and American monetary policy. Due to the language used by the Bank of Canada’s Stephen Poloz and the Federal Reserve’s Janet Yellen, investors are wondering which central banker will raise rates first.

“The first rate hike is still far enough out that even central bankers can’t answer that question,” said Avery Shenfeld, chief economist at CIBC. “But the impression [central bankers] have left with markets is that the Fed is more comfortable talking about rate hikes than the BoC.”

On Tuesday, Mr. Poloz indicated that he couldn’t rule out a rate cut if inflation slipped lower. While this was a prudent course of action, especially since he took care to reaffirm the Bank’s neutral stance in his next few words, this headline sent the loonie into a downward spiral.

The next day, the Canadian dollar fell to a four-and-half-year low against its American counterpart. The Federal Open Market Committee (FOMC)’s updated projections showed that monetary policymakers think the federal funds rate will be at 1.0 percent by the end of 2015, compared to their estimate of 0.75 percent from December. In the ensuing press conference, new Chair Janet Yellen opined that the Fed’s first rate hike could come “about six months” after the central bank’s bond purchases ceased.

If everything goes as planned, that could put the first rate hike in April, according to Bank of Montreal chief economist Doug Porter. “Whether it was on purpose or off-the-cuff isn’t obvious,” Mr. Porter said, in reference to the Chair’s remark. “But we’ve never really had a time frame on that before.”

With markets keyed in on a just a few words out of the thousands said by these two central bankers, participants missed out on what the two agree on—and it’s something that has ramifications not just for investors, but also for Main Street.

For the first time, this sentence made its way into the latest FOMC statement (emphasis added):

“The Committee currently anticipates that, even after employment and inflation are near mandate-consistent levels, economic conditions may, for some time, warrant keeping the target federal funds rate below levels the Committee views as normal in the longer run.”

Meanwhile, in his speech, Mr. Poloz provided some context as to why this will come about:

“But the demographic forces that are in play suggest that the growth trajectory that we converge on after the recovery period will be slower than our historical trend, and it will also be associated with lower equilibrium rates of interest than we are used to.”

The FOMC statement strongly alluded to it, and Mr. Poloz spelled it out clearly: in all likelihood, interest rates aren’t going to get as high in this cycle as they have during previous cycles.

First, what’s needed is some clarity on what the natural (or neutral) rate of interest is, and how it relates to economic growth.

The natural (or neutral) interest rate can be a confusing concept. John C. Williams, President of the San Francisco Federal Reserve Bank, has defined it as ”the real fed funds rate consistent with real GDP equaling its potential level (potential GDP) in the absence of transitory shocks to demand.” In turn, he defined potential GDP as “the level of output consistent with stable price inflation, absent transitory shocks to supply.”

Now, in English: the neutral interest rate is what monetary policymakers believe would be an appropriate level for their short-term policy rate (adjusted for inflation) that would keep the rate of price increases steady at a desirable level during a period in which the economy is expanding at a “Goldilocks” pace – running neither too hot, nor too cold.

This exact number is difficult to define, and models which seek to calculate it have been the subject of many scholarly papers. What’s notable is this: North American central bankers think this so-called natural rate is moving lower.

According to Mr. Shenfeld, this common chord struck by central bankers is a signal of pessimism regarding how well the economy will do in the future. ”This is an important message for financial markets to understand in terms of long-term expectations,” he said. “It’s a recognition that demographic and other factors imply that when good times return, they won’t be as good as they have been.”

Mr. Shenfeld observed that this isn’t necessarily a new idea, pointing out that former Bank of Canada Governor Mark Carney had made a similar point in the past.

Mr. Porter concurred. “[This notion] has been circulating for a while under a variety of guises, but was made more clear-cut this week,” the economist said, adding that he had “no disagreement” with the substance of the message.

From the Canadian perspective, it’s interesting to note how much Mr. Poloz’s views have changed since taking the reins at the Bank of Canada in June 2013. Six months ago, The Economist dubbed the new central banker “Sunny Stephen” (in contrast to his predecessor, “Moody Mark”) in reference to his rosy outlook for the housing market and the economy. Around that time, Mr. Poloz said the Canadian economy was close to a “tipping point” at which business investment would begin to help propel the economy forward. Now, he’s telling Canadians that once the economy gets back to normal, it won’t grow as much as it has in the past.

“When Poloz first took over, he seemed quite upbeat about the medium-term outlook,” said Mr. Porter, commenting on the evolution of the central banker. “Slowly but surely, he’s lost some of his enthusiasm and I can’t help but think that will filter into his worldview in terms of setting monetary policy. If he does believe in secular stagnation, he won’t be in any hurry to raise rates.”

In Mr. Poloz’s speech, he said the aging population is “slowing us down.” For a succinct explanation of how and why that’s the case, we turned to TD economist Michael Dolega, who made this diagnosis nearly a decade ago while working at the Bank of Canada.

“As I often put it, the baby boomer generation will single-handedly depress potential growth in the economy, both directly through labour participation, and indirectly through their demand for services such as health care which have nearly non-existent labour productivity growth,” he wrote in an email to Business in Canada.

It’s important to note the distinction between the kind of slow growth that is common after a financial crisis – or as Mr. Poloz called it on March 18, the “hangover” – and this long-term trend towards slower growth that will keep interest rates below historical norms even after the economy has gained sufficient traction.

And as an aside, this new equilibrium also has consequences for what we can expect from central banks the next time they need to provide more accommodative policy. If you fast-forward to the next crisis, unconventional monetary policy will become…more conventional. Since central banks will be starting to ease from a lower rate, it’s entirely possible that we may “revisit QE or something like it next cycle,” Mr. Porter said.

But how does moving from “lower for longer” to “lower for the long-run” impact both financial markets and the real economy?

As Mr. Poloz said, “Right now, we are seeing a very predictable demographic bulge of more people, putting away more savings.” For investors, this environment is likely to contribute to what has become known as the “search for yield.” Simply, this is excess savings looking for a better return than fixed income can provide.

“In a world of low interest rates, some investors – but not all – will be driven to take excessive risk,” said Christopher Ragan, professor of economics at McGill University.

Mr. Porter agreed that this is indeed a possibility, but suggested there isn’t much central bankers can do to mitigate this development. “[Central bankers] can’t crank up interest rates to an unnatural level,” he said.

On the real side, “lower for the long-run” suggests businesses’ reluctance to invest may continue. Companies have a better reason to take a “wait-and-see” approach to capital spending because the cost of holding off and then playing catch-up on investment is lower than it has been in the past since the ceiling for interest rates has come down.

In light of the elevated level of indebtedness of Canadian homeowners, this group is much more sensitive to rate increases than during previous cycles. However, for the marginal homebuyer, the situation is completely different. A rational economic actor would take into account the fact that mortgage rates aren’t likely to reach levels considered to be historically normal before making the decision to purchase a home.

If marginal buyers are short-sighted, they will participate in the “rush to beat higher rates,” which is what we saw in the summer of 2013. Conversely, if they act in a more rational fashion, they’ll exhibit considerably more caution in this regard.

In a soon-to-be-published paper, Mr. Ragan also offers advice to policymakers on how to respond to this slow-growth recovery. The economist makes the case that both monetary and fiscal policy are relatively tapped out, though the latter has some limited room to give the economy a shot in the arm. However, he argues that given the “future budgetary challenges associated with an aging population,” it would be prudent for governments to exercise restraint on this front. Instead, unlocking underutilized labour, he argues, is what policymakers – especially at the provincial level – should dedicate themselves to in the short-run.

“Policymakers should recognize that the burden of a slow-growth economy falls mostly on unemployed and under-employed Canadians, and they should therefore focus their attention on designing policies to improve the functioning of the labour market,” he writes.

While Mr. Poloz’s speech was vague on how structural impediments to growth could be eliminated, Dr. Ragan offered concrete recommendations on what is needed:

Mr. Ragan’s suggestions serve as a silver lining, a possible escape route from the rather bleak picture of economic performance that central bankers painted this week. To be sure, neither Mr. Poloz nor Ms. Yellen said anything that should cause you to sell stocks, put your home on the market, or fret about your child’s future.

But they did send a clear signal that a new era of subpar economic growth is upon us.