With the release of Statistics Canada’s annual review of merchandise trade last week and Bank of Canada chief Mark Carney’s remarks at the Kitchener Waterloo Chamber of Commerce days earlier, there’s been a lot of talk about Canadian exports recently–and a number of interesting charts to illustrate where the problem lies.

Carney, for example, turned up this graph to show how, unlike in most previous post-recessionary periods, exports haven’t played a major role in pulling us out of the doldrums this time: 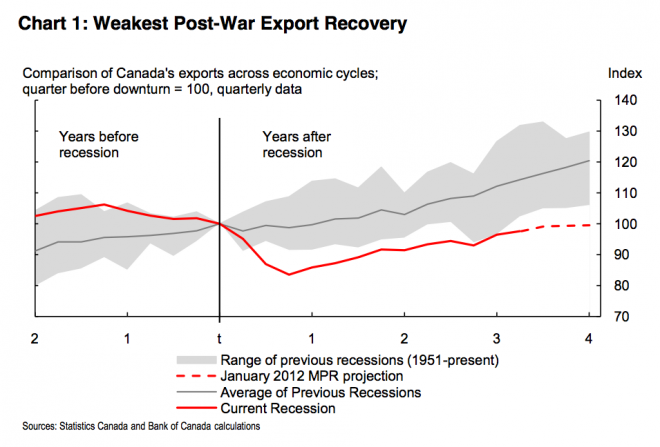 According to the central bank governor, this lacklustre performance of Canada’s exports is mostly due to the fact that we’re still fixated on selling our stuff to the U.S. rather than faster-growing emerging economies: 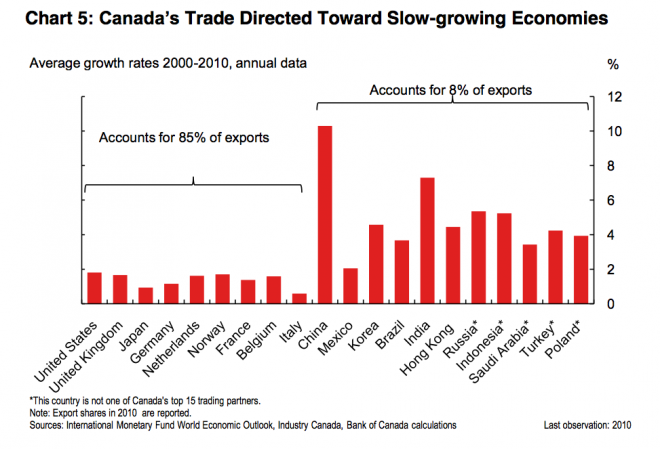 Lakehead University economics professor Livio di Matteo, for his part, put the latest trade data from StatsCan’s report into a series of charts that shows how Canadian exports have indeed started to turn away from the U.S. and towards China (as well as, perplexingly enough, the U.K.). According to the latest statistics, the U.S. share of Canadian exports has dipped from 87 to 74 per cent between 2002 and 2011, whereas China’s has more than tripled. Check out di Matteo’s post and graphs here.

Somehow, though, the trade shift over the last ten years didn’t happen fast enough. We used World Bank data to compare annual percentage growth figures for Canada’s GDP (blue) and exports (red). The chart below illustrates what Carney was probably alluding to when he said: “Exports still have not regained their pre-crisis peak, and in fact remain below their level of a decade ago. Canada has steadily lost global market share throughout this period.” Clearly exports stopped being the economic propeller they used to be long before the Great Recession. 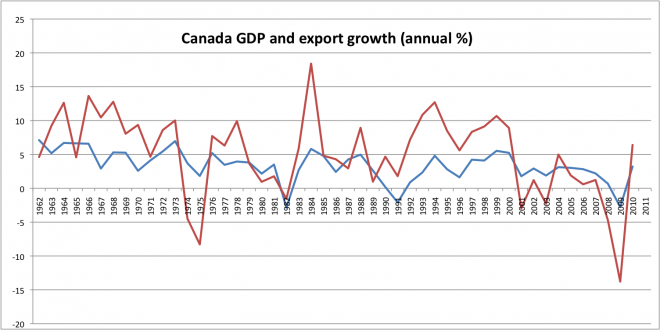