Donald Trump is the 'canary in the coal mine': Bill Morneau 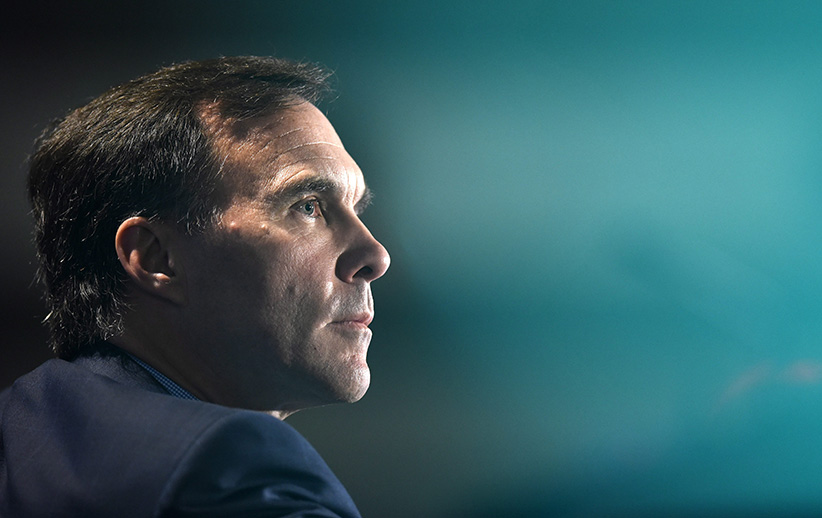 Donald Trump is “the canary in the coal mine” forcing a recognition of the anxiety and resentment of citizens who feel like the benefits of a global economy are passing them by, Finance Minister Bill Morneau told a room focused on innovation and the economy today in Ottawa. Morneau was speaking at the Growth Summit hosted by the Public Policy Forum, and he said Trump is merely the loudest of the warning bells sounding in global politics over the last year. “Whether it’s Trump or (Bernie) Sanders or the Brexit decision, these are real signals that there’s a challenge,” he said.

Morneau described a noticeable global shift over the last year. In December, at the G20 meetings in Antalya, Turkey, he sensed representatives in the room thought investing in infrastructure to boost a national economy was an interesting idea, but not everyone was on board with his government’s focus on “inclusive growth.”

Now, nearly a year later, the finance minister says his international counterparts are fixated on taking the temperature of citizens and ensuring people don’t feel abandoned. At International Monetary Fund meetings in Washington last week, one CEO of a global company described the left-behind sensation as a “raging fire” within the middle class in the United States, Morneau said. “I’m seeing it around the world, and it is around that sense that we need to show people the benefits of trade, we need to show people the benefits of technology change,” he said. “Trump is the canary in the coal mine.”

Too many people feel like trade, technology and globalization—the very trends touted all day long at the summit as the golden path to innovation and economic growth—are not benefitting them personally, Morneau said. And that unrest will only build as advancing technology makes jobs like truck drivers or receptionists obsolete. “We will continue to have people who are challenged to see how these advantages for our overall economy are actually an advantage for their family,” he said.

These points, of course, dovetailed nicely with the talking points and priorities of Prime Minister Justin Trudeau’s Liberal government: improving the lives of Canadian families by lowering taxes on the middle class and raising them on the top one per cent; overhauling the Canada Pension Plan; and focusing the Canada Child Benefit on families who need it most. Morneau pegged all of these efforts to alleviating people’s “anxiety”, as well as the tension between what’s supposed to be good for the economy and what will actually help their families in the short term.

The finance minister was asked about balancing his government’s plans for hefty infrastructure spending as a means to create middle-class jobs against the public desire to see the budget balanced sooner rather than later. Morneau said he doesn’t discount the importance of fiscal responsibility, and the quality of the government’s investments matters, but in a broader way, Canada needs to be thinking about how to improve its growth given the economic challenges it faces. The alternative—adopting an austerity approach in these times of sluggish growth—would make things worse, he argued.

“Our view is that if you don’t show the benefits to people, then you can’t expect them to be engaged in the positive outcome that we get from trade,” he said. “And we think that’s the way we can engage Canadians in doing what’s best for all of us, which is to make those investments and show them the benefits, not only in the long term but in the short term.”