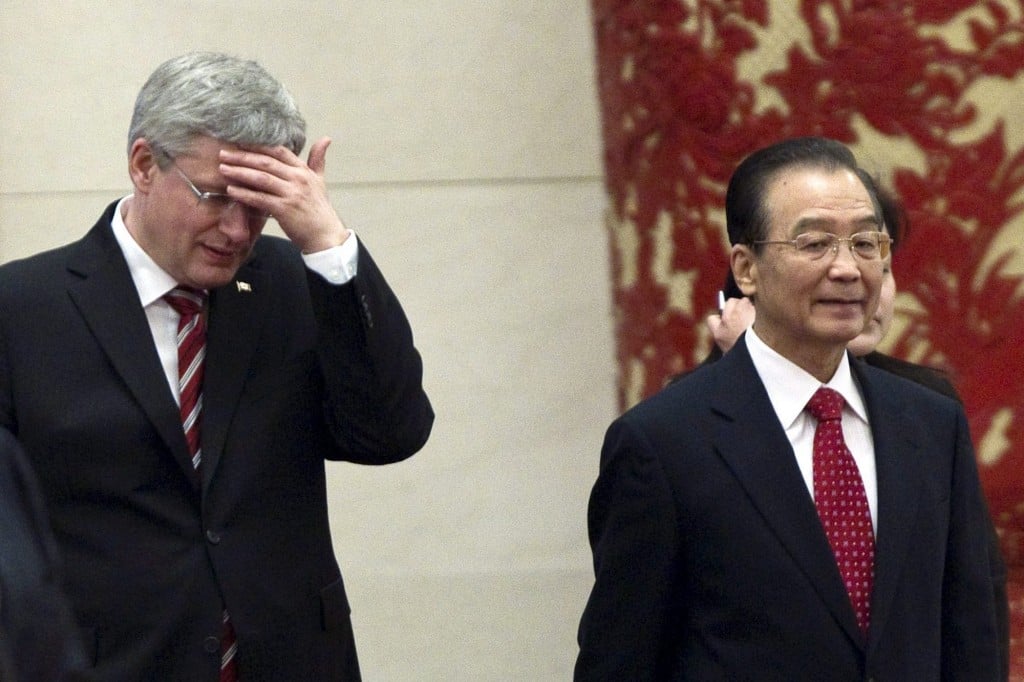 Prime Minister Stephen Harper with China’s then-premier Wen Jiabao in 2012, when the FIPA was signed

There is an enormous chasm between what a Foreign Investor Protection Agreement (FIPA) does and what excitable nationalists claim such agreements do. Unhappily for the standards of public discourse, excitable nationalists make good copy, so their wild imaginings, as with the Canada-China agreement ratified last week, are invariably quoted without examination. After all, who wants to read through the dull business of understanding why FIPAs exist and what they say?

I hope you do, dear reader, because that’s the ground I’m going to cover here.

First, though, there have been any number of objections to FIPAs in general and to the Canada-China FIPA in particular, none of which I find convincing.

1. Any argument citing a loss of sovereignty. All international agreements involve ceding sovereignty. Wanting to retain the power to expropriate foreign-owned assets is probably the most petty and diminished notion of what sovereignty means.
2. Foreign-owned corporations can sue Ottawa if a new policy reduces their profits. As we’ll see shortly, that’s not true. Foreign firms have to show that they’ve received different treatment than their Canadian-owned competitors.
3. Foreign-owned corporations can sue Ottawa, full stop. Initiating a lawsuit is not the same thing as winning one. (Andrew Leach makes the point more entertainingly here.)  In this archive of NAFTA Chapter 11 lawsuits, I count 15 lawsuits that were withdrawn or abandoned, 10 cases where Canada’s position was upheld (often with costs), and one defeat. The defeat was the S.D Meyers case, in which the federal minister for the environment (Sheila Copps, if you must know) overturned a contract won by S.D. Meyers to dispose of PCBs in favour of a Canadian competitor. No one—including her own advisers and the arbitration panel—could see what public purpose was served by shipping PCBs 3,500 km from Toronto to Edmonton instead of 500 km to Cleveland.
4. The 31-year lead time for abrogating the treaty. Makes sense to me, if you’re talking about 30-year investment projects.
5. Secret negotiations and secret hearings. To the extent that the treaties and decisions are made public, I don’t see the problem.
6. Red China! It’s rather late in the day to be playing this card. It is impossible be simultaneously open to accepting Chinese goods while refusing to accept Chinese investment.

In order to understand why these arguments are so flawed, though, you have to step back and think through some of the basic mechanics of international trade and where FIPAs fit in.

We’re used to thinking of trade as a matter of exchanging goods and services produced in one country for goods and services produced in another, but these sorts of exchanges almost never happen. A far more typical transaction takes the form of goods produced in one country that are traded for assets owned by residents of another. It’s useful to think that this asset is money, but it could take any form. A couple of centuries ago, the asset would have been gold: All imports (exports) of goods were offset by exports (imports) of gold.

This leads us to the key national income accounting identity that is behind the logic of FIPAs (I told you this was a dull business):

As it happens, Canada runs a fairly large trade deficit with China: roughly $30 billion per year. This means that as far as China is concerned, trade with Canada is essentially a matter of them accumulating large amounts of Canadian assets.

Once you realise that capital flows are essentially the same thing as trade flows, the logic behind FIPAs become clear. Countries that are exporting goods in return for assets can reasonably expect to ask that these assets won’t be effectively expropriated by governments pandering to anti-foreign bias.

It’s not enough to simply promise to treat foreign-owned firms the same as domestically owned firms. Even if discriminatory regulations and/or fees are subsequently overturned, the lost revenues—not to mention the legal costs—still amount to an effective expropriation. What FIPAs do is ensure that governments can’t expropriate foreign-owned assets without compensation. (Domestic laws already ensure that governments cannot expropriate domestically owned assets without compensation.)

The above explains why FIPAs exist, and what they are designed to do. Once you understand these points, you start to see that much of the criticisms of FIPAs consist of fantastical nonsense, especially when you take the trouble to read the text of the treaties. For example, this is from NAFTA’s Chapter 11:

Provided that such measures are not applied in an arbitrary or unjustifiable manner, or do not constitute a disguised restriction on international trade or investment, nothing in paragraph 1(b) or (c) or 3(a) or (b) shall be construed to prevent any Party from adopting or maintaining measures, including environmental measures:

(a) necessary to secure compliance with laws and regulations that are not inconsistent with the provisions of this Agreement;

(b) necessary to protect human, animal or plant life or health; or

(c) necessary for the conservation of living or non-living exhaustible natural resources.

And this is from part D of the Canada-China FIPA:

Provided that such measures are not applied in an arbitrary or unjustifiable manner, or do not constitute a disguised restriction on international trade or investment, nothing in this Agreement shall be construed to prevent a Contracting Party from adopting or maintaining measures, including environmental measures:

(a) necessary to ensure compliance with laws and regulations that are not inconsistent with the provisions of this Agreement;

(b) necessary to protect human, animal or plant life or health; or

(c) relating to the conservation of living or non-living exhaustible natural resources if such measures are made effective in conjunction with restrictions on domestic production or consumption.

It should be abundantly clear that claims to the effect that “FIPAs give foreign-owned companies the power to veto laws aimed at protecting the environment” (or public health, or whatever) are wrong. Governments retain their power to regulate in the public interest; what they cannot do is have a separate set of rules for foreign-owned and domestically owned firms. On this point, I think the burden of proof is on anti-FIPA activists to explain how and why the public interest would be served by this sort of regulatory discrimination.

There are some valid concerns about ensuring that FIPAs are enforced in a way consistent with the intentions of the treaty, but these are concerns shared by virtually any attempt to legislate for the public good. For example, there’s always the possible risk of regulatory capture: Agencies whose goal is to oversee firms involved in such activities as resource extraction or banking may end up acting on behalf of the private interests they are monitoring. But the solution here is to monitor enforcement, not to throw up one’s hands.

It’s time to tone down the rhetoric. FIPAs are not so scary when you take the time to look at them.