When the U.S. economy crashed in 2008, taking the world with it, central bankers grabbed their defibrillators and headed for the emergency room. To shock their economies back to life, interest rates were slashed nearly to zero. Then when it was clear the American patient would survive, but remained dangerously weak, the U.S. Federal Reserve administered a bold new treatment: quantitative easing, by which it created trillions in new money to stimulate growth.

Well, in just under a month, the latest round of quantitative easing, more commonly known as QE2, will end. Meanwhile, here at home, the Bank of Canada faces pressure to raise rates. Last week, the Organisation for Economic Co-operation and Development said the B of C should put an end to its “highly stimulative” monetary policy to keep inflation in check. Opinions are divided over what comes next. Optimists argue the U.S. economy can stand on its own. Companies are profitable and the job market is improving. Besides, interest rates in the U.S. will still be near record lows. On the other hand, the easy money that’s helped drive up stock markets could be bad. Albert Edwards, a strategist at French bank Société Générale, shares this view in the extreme. He warns the end of QE2 will cause a “deflationary bust” and send the S&P 500 stock index down 70 per cent.

As for Canada, the recession was never that bad to begin with. The key reason B of C governor Mark Carney kept rates low is to prevent the loonie from strengthening further and hurting exporters. An end to QE2 might even help in that effort, since the greenback is expected to rise after the program ends.

In short, the economy faces its greatest test in three years. But is it resilient enough to survive without artificial support? 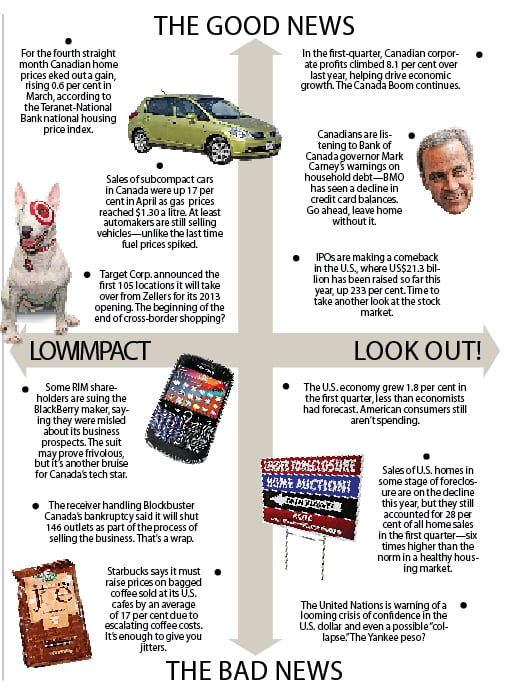 Signs of the Times
An American ambassador

Even in austerity-gripped Europe, recent rare jewellery auctions still managed to fetch over $200 million. Closer to home, Bernard Madoff’s booze collection brought in an equally impressive $41,530—sadly, a drop in the bucket for victims of his $65-billion Ponzi scheme.

Under fire from childhood obesity activists, Ronald McDonald got a vote of confidence from McDonald’s CEO Jim Skinner, when he suggested the attack was un-American—“he is an ambassador for good,” he said—to question a fast-food mascot.
America remains the land of opportunity, providing your dream job is folding jeans and ringing in groceries. The U.S. Labour Department said retail sales and cashiers are the two biggest job categories in the nation.