Amid the constant stream of statistics and forecasts it’s easy to forget that booms and busts are all about human behaviour—and the various ways we translate our hopes and fears into action. This week, market research firm the Futures Company issued a survey that identified eight consumer categories, providing a useful framework for understanding how consumer psychology will impact on the downturn and the recovery. They are as follows:

The Unruffled (16 per cent of the public): Job is secure. Debt is easily manageable. If they’re doing anything to save money, it’s not much.

The Earnest (10 per cent): Job is secure. Debt is under control. Anxiety is mild. They’re doing little things to save, but little has changed.

The Researchers (17 per cent): Still spending, but prudence drives them to carefully consider all options before buying anything significant to ensure they’re getting the best possible price and quality.

The Postponers (12 per cent): The employment numbers are worrying, and that pile of bills isn’t going to pay itself. These people haven’t stopped spending, but money is being socked away and big purchases will have to wait for better times.

The Budgeters (nine per cent): Household costs are high and the job market is keeping these folks up at night. The budgeters are cutting back across the board and fiscal restraint rules the day. If it can’t be bought on sale or at Wal-Mart, they’re not getting it.

The Liquidators (six per cent): Wanna buy a used motorcycle? These folks are selling. Making ends meet means auctioning off assets that have value, in some cases to reduce debt, more often to pay bills.

The Robbing Peter (21 per cent): The largest single category of consumer, these folks are having trouble keeping up with all their bills. They have cut costs everywhere they can, are budgeting as much as possible, but the Visa bill is going to have to wait until next month.

The Slashers (nine per cent): The job is gone and the debts are crushing. They are in bad shape: selling assets, slashing all but essential costs, and dreading trips to the mailbox. Wal-Mart is only for stuff that can’t be bought at the dollar store.

What does all that mean for the economy? What we need is for the Earnest to become Unruffled, and for Postponers to go back to being Researchers again. But the real test may be among the 36 per cent who are truly distressed. When they stop slashing, liquidating, and robbing Peter to pay Paul—that’s when the recession will really be over.

Housing has been the epicentre of the current global crisis, but a few scattered improvements are emerging. Pending sales of U.S. homes unexpectedly rose 2.1 per cent last month. In the U.K., analysts were stunned by a slight rise in house prices, as mortgage approvals climbed to a nine-month high. In China, property sales rose 1.1 per cent in February.

Action on the line

North American factories are slowly and cautiously coming back to life. The Institute for Supply Management’s manufacturing index rose slightly in March. More importantly, demand for durable goods (products made to last more than three years) rebounded by 3.5 per cent in February, after plunging by 7.8 per cent in January. Non-defence orders were up by an impressive 7.1 per cent, which economists see as a sign that businesses are starting to invest in equipment once again.

It’s no Econogauge™, but the VIX volatility index is often referred to as Wall Street’s “fear index” because it reflects traders’ anxieties about the market. The VIX rises on turmoil, and falls when calm is restored. Last week, the VIX closed below 40 for the first time since January—a decent sign that traders are now merely nervous, rather than terrified.

The U.S. job market continues to spit out workers by the thousands. Another 663,000 lost their jobs in March, bringing total job cuts to over five million in 16 months. That’s about equal to the population of Minnesota, and has pushed the unemployment rate to 8.5 per cent—a 25-year high. But even that fails to convey the misery that is the U.S. job market. If you include people who have given up looking for work, and those who’ve taken part-time jobs because they can’t find full-time work, the unemployment rate is at 15.6 per cent—highest since they began compiling figures in 1994.

Canadian municipalities issued 16 per cent fewer building permits in February than in January, and 36 per cent less than in the same month a year ago. The worst plunge came in Ontario, where permits tumbled 38 per cent from January to February, primarily due to a sharp collapse in commercial and institutional construction projects.

Did we say that?

Add the Conference Board to the list of those scrambling to scale back their too-rosy projections for Canada’s economy. Heading into this year, the think tank projected a mild contraction of 0.5 per cent. Now they expect a 1.7 per cent dive, accompanied by 340,000 jobs lost, an unemployment rate of 9.5 per cent, and a meagre recovery in 2010.

GRAPH OF THE WEEK – The advertising recession • You might not enjoy advertisements, but they help pay for lots of things you do enjoy . . . like this magazine, for instance. The graph below provides a snapshot of the declines
in advertising spending from 2007 to 2008 for various media. Unless you’re running an Hispanic cable network, the news ain’t good. (And 2009 has been even worse.) 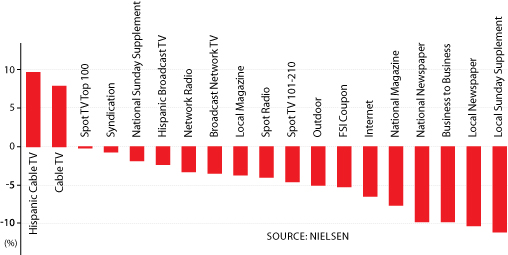 SIGNS OF THE TIMES

A run of hopeful economic data coincided with the G20 conference last week, and sparked talk of “green shoots” across the devastated economic landscape. Perhaps the most telling sign: as the market has rallied by more than 1,000 points in the past month, companies are selling bonds again, raising vital corporate capital. But not everybody is convinced that signs of an economic spring will last.

“Our bet is that the global economy is poised for significant improvement.” —David Hensley, director of global economic coordination, JPMorgan Chase

“You do see some positive indicators . . . the kind of very sharp downturn that we’re seeing right now will not continue indefinitely.” —Lawrence Summers, National Economic Council

“If something happens to spook consumers and they crawl back into their tortoise shells, that would be terrible news.”
—Alan Blinder, economics professor at Princeton University

“If we continue to lose 600,000-plus jobs a month, that will burn out those green shoots pretty quickly.” —Mark Zandi, chief economist at Moody’s Economy.com

“The market doesn’t have any evidence now that it’s not getting worse. This stock market rally that we’re seeing, people need to be cautious about it.”—James Swanson, chief investment strategist at MFS