Everything you need to know ahead of the Alberta budget

Nowhere has low oil prices hit harder than in Alberta, and the government’s finances in particular 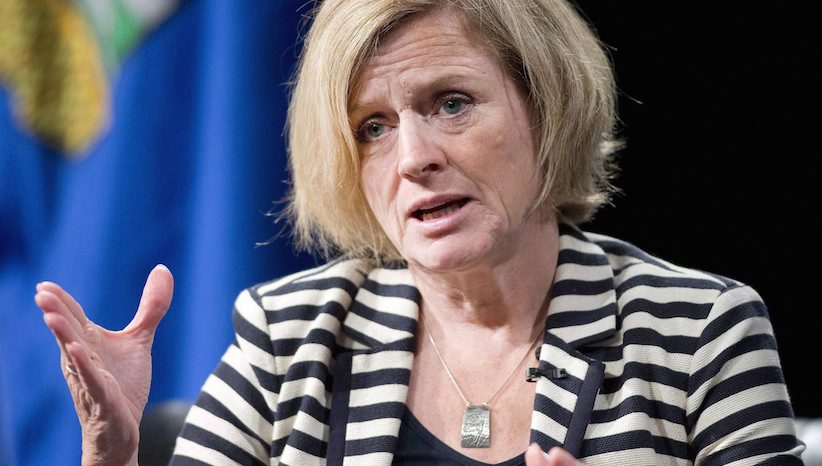 Low oil prices and disappointing economic news have now swept two Conservative governments from power. First, in May, the Alberta PCs lost to the NDP. Second, last Monday night, the federal Conservatives lost to the Liberals. Of course, many factors were behind both Rachel Notley’s and Justin Trudeau’s stunning majority victories, but “the economy” was perhaps the most important issue by far for many voters.

Nowhere have low oil prices hit harder than in Alberta, and the government’s finances, in particular. Some even speculate that Alberta’s NDP delayed releasing the budget so as not to harm the prospects of their federal counterpart during the election. Whatever the reason for the delay, the wait is almost over. On Oct. 27, the Alberta government will release its budget for 2015-16. It’s sure to be an interesting document.

As budgets are often highly political, clarifying some key facts and providing some context for Alberta’s overall fiscal situation may be helpful.

First, the deficit. We are, in all likelihood, going to see a very large budget shortfall. Indeed, it’s on track to be Alberta’s largest deficit in history—probably somewhere around $6 billion, according to the latest forecast. It would be wrong to jump on this number and blame the new NDP government. The current economic challenges facing the province are not of their doing (nor are they Jim Prentice’s or Alison Redford’s, for that matter). The government of Alberta relies heavily on non-renewable resource revenue to pay for its spending. With low oil prices, we have low government revenue. (Of course, this reliance on royalties is a policy choice—and not a very sensible one.)

Since 2005-06, the resource sector contributed 40 per cent of total revenue. It gradually fell to 20 per cent. In the upcoming Alberta budget, it is likely to be around six per cent or so. These fluctuations have a massive effect on the budget. They are hard to forecast, and subject to sometimes massive changes in the global energy market. Hence, Alberta’s current predicament.

So, how bad is a $6-billion deficit? While not trivial, obviously, it is completely manageable. Alberta is fully able to handle it and no one need panic. It represents 1.8 per cent of the province’s GDP, which is fairly small, as far as some deficits go. Below I’ve plotted the surplus or deficit position of every provincial or federal government budget since 1981. (For the data, see RBC’s Fiscal Tables.) A deficit of 1.8 per cent of GDP ranks 115th out of 385 budgets. Hardly sky-is-falling territory. 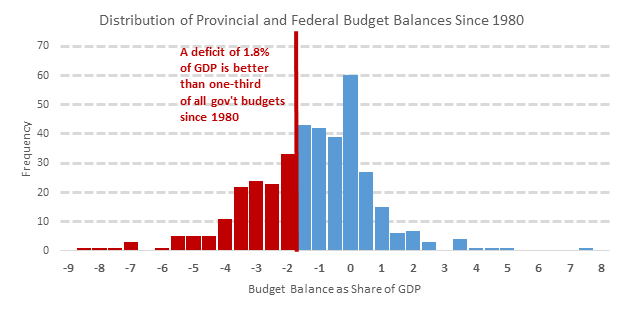 Not only is such a deficit fairly moderate, but Alberta is uniquely capable of absorbing such a negative fiscal shock with relative ease. In fact, it is the only province that owns more financial assets than it owes in debt. That is, Alberta’s government has positive net worth—unlike every other jurisdiction.

Of course, I don’t mean to suggest we not concern ourselves with the deficit. We should indeed eliminate it over a reasonable period of time, but few economists would suggest we balance the government budget each and every year, no matter what. Instead, offset deficits in the bad years with surpluses in the good.

How can Alberta get out of its fiscal hole? Should we lower spending? Should we increase taxes? Perhaps some combination of the two? Or should we sit by and do nothing, waiting for an eventual increase in oil prices to save the day? Some benchmarks would be useful here.

First, it’s common to compare Alberta’s spending levels to its own recent history. For example, the Fraser Institute recently reported that the current deficit is due to spending growth exceeding the rates of inflation and population growth. Had Alberta’s spending grown no faster than inflation and population since 2004, they correctly point out, we would currently have a sizable surplus today—even with low oil prices. Even if spending grew at the faster rate of overall GDP growth, we would still have had a surplus.

Below, I take a slightly longer view. I plot actual spending against alternative paths of spending growth since 1980. First, inflation plus population growth. Second, the rate of the overall economy (as measured by nominal GDP). 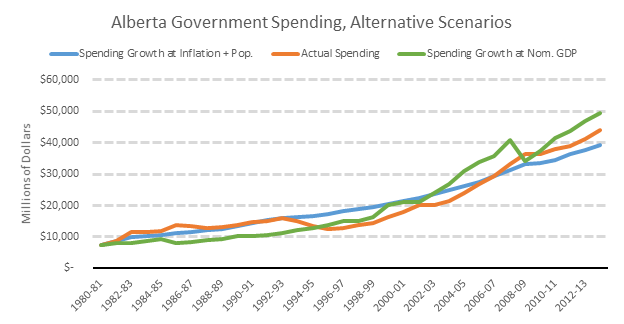 While spending grew quickly from around 2002 onward, this followed a period of low (even negative) spending growth. Over the past 30-plus years, spending grew slightly faster than population and inflation, but grew slightly slower than the economy as a whole. We can see this last point more clearly by plotting the Alberta government spending and revenue shares of GDP.

By these measures, the government of Alberta is almost as small as it has ever been—at only 13 per cent of the economy. In fact, the share of GDP accounted for by Alberta’s government is less than any other government in Canada.

Perhaps looking at revenue and spending shares of GDP gives a misleading picture. Instead, let’s look at program spending per person. This metric tells a different story.

Notice that the three oil-producing provinces (Alberta, Saskatchewan, and Newfoundland and Labrador) have the highest per capita spending. Not surprising, as wages in these provinces are much higher than others. Alberta, for example, has wages about 25 per cent higher than the national average. The cost of delivering public services is therefore also higher. After all, government must compete for workers, and other inputs, with a private sector.

Is there any scope to lower per capita spending? Well, we could obviously cut services, but that is not likely a route most Albertans (or the government) would want to take. Indeed, expect total spending to increase by $1.5 to $2 billion relative to the original PC budget—with the majority of that increase in health, followed by additional infrastructure investments.

How about lowering the cost of delivering services? Well, the largest cost–by far–is labour compensation. Overall, the government spends about $23 billion on labour compensation (based on this). But, are public servants overpaid? Not really. A recent study of public sector wage premiums across Canada finds only four to seven per cent higher wages in Alberta’s public sector, compared to similar workers in the private sector—lower than the six to 10 per cent wage premium found for federal public servants (here). If we eliminated this modest public-sector wage premium, total spending would fall by roughly $1 billion. Not chump change, to be sure, but a small fraction of the overall budget shortfall. Some attrition in the overall number of workers or pension reform would also help here. Restraining growth of public sector compensation is a valid option that should be on the table, but it is no magic bullet and won’t be easy.

How about additional sources of revenue? We’ve already seen a number of tax changes this year. The NDP adopted some of Prentice’s fee increases, higher gas taxes, and so on. They’ve also increased income taxes on those earning more than $125,000 and on corporations. But, they cancelled Prentice’s planned health levy (which was forecast to raise roughly $500 million). Overall, personal and corporate income tax revenue, by the government’s own numbers, may net just under $500 million in additional revenue relative to the original PC budget. There’s probably little appetite for any further tax changes, though this may be something to watch for.

What about doing nothing and hoping oil prices rebound? There’s little indication that this is at all likely. Indeed, the prospect for a return to higher oil prices has diminished since the start of the year. Compare the government forecast to the latest WTI Futures Prices (which are contracts to buy/sell at some future date at some agreed price). If the market’s expectations (the orange line) prove correct, we’re in for a few more years of low resource revenue. (For perspective, each US$1 per barrel in lower oil prices worsens the government’s budget balance by roughly $150 million.) 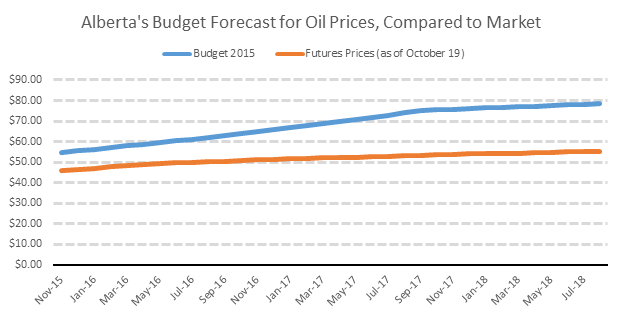 So, with no easy way to lower spending or raise revenue, and with little prospect of higher oil prices, what can the government do? There are options, some of which were spelled out by University of Calgary economist Jack Mintz this week, including reforms to health, education and taxes. In any case, we won’t have to wait long to see what next week’s Alberta budget contains. It will not only give us an important update about its current situation, but (one hopes) will also outline the government’s plans to move toward a more sustainable fiscal path, one that is less reliant on volatile resource revenues. Albertans–and, indeed, all Canadians–should watch with interest.