Fear and loathing in the Canadian economy

Canada’s economy is at a crucial juncture, one that will determine whether this will be a short, shallow recession, or something deeper and longer-lasting 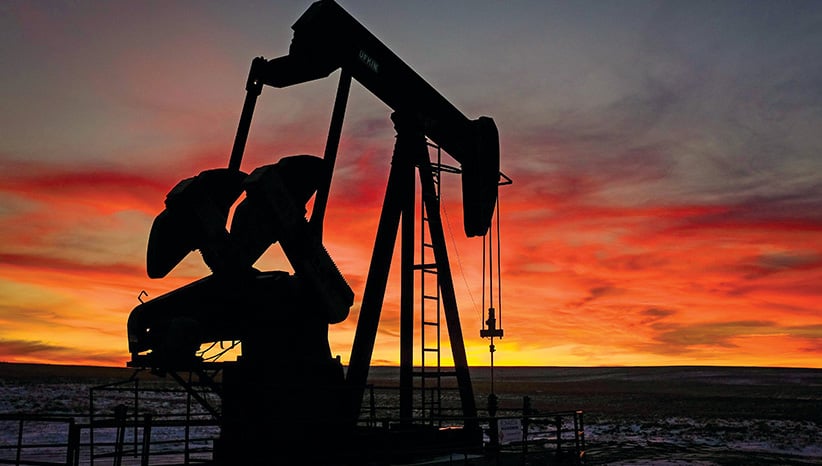 Listen to Jason Kirby read his column, or subscribe to Maclean’s Voices on iTunes or Stitcher for on-the-go listening:

There are a lot of things the Harper government thinks Canadians should be fearful of: homegrown terrorism, marauding gangs of thugs, Justin Trudeau. There is one threat, however, the government is adamant we not worry about: the R word.

The question of whether Canada will tumble into recession dogs Finance Minister Joe Oliver wherever he goes these days, yet his response has been bullishly consistent: “We’re not in a recession,” he assured us the other day. “We expect solid growth for the year.”

If he says so. Instead, many private sector economists now believe Canada is already in recession—defined as two back-to-back quarters of declining growth. We know the economy shrank through each of the first four months of the year. And while we won’t have a definitive answer from Statistics Canada about the second quarter until September, GDP growth will have to have been robust in May and June—defying evidence to the contrary—for Canada to dodge the bullet. 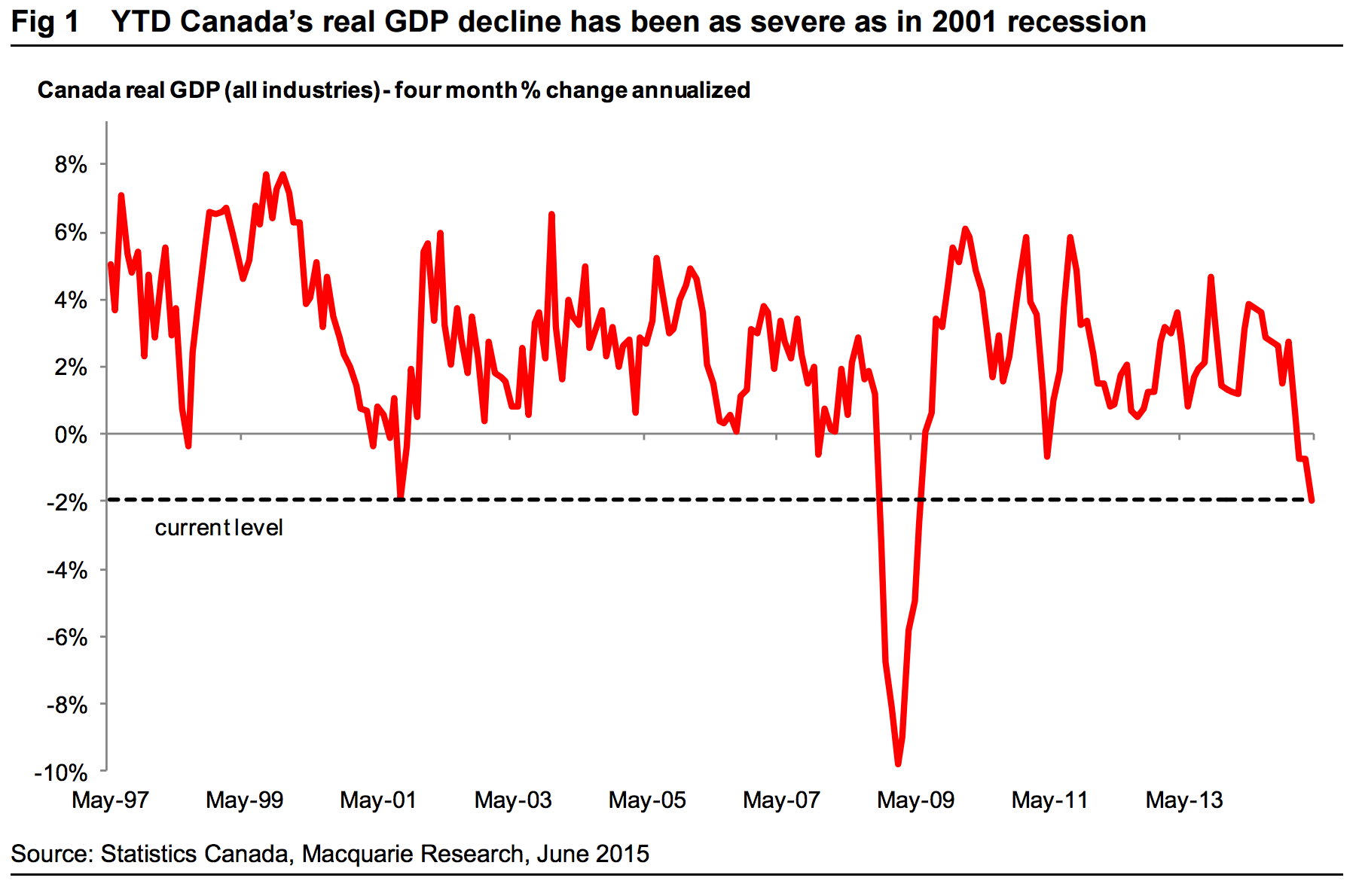 So, accepting that we are likely already in recession, the question becomes: How bad could it get? Canada’s economy is at a crucial juncture, one that will determine whether this will be a short, shallow contraction, or something deeper and longer-lasting.

It comes down to psychology. Fear of a recession can easily become self-fulfilling. If households, businesses and investors feel the outlook for the economy is darkening, they’re likely to tighten their belts. That means consumers make fewer purchase, such as homes and cars, and forgo vacations and meals out. It means less financing for entrepreneurs. It means businesses cut back on purchases of machinery and even on hiring. (This week, a Statistics Canada survey revealed that companies are slashing their capital-spending plans for 2015, the first decline since 2009.) All these decisions to hunker down have a debilitating effect on economic activity.

So far, the standard measures of consumer confidence are holding up. The Bloomberg Nanos Canadian Conﬁdence Index, for instance, continues to hover near its 2015 high. But at the same time, Canadians have a hunger for information about the recession right now, suggesting that fear of a downturn is real and mounting. That’s clear from this chart, which shows the frequency with which Canadians are suddenly googling the word “recession.” (Click image to open full size.) 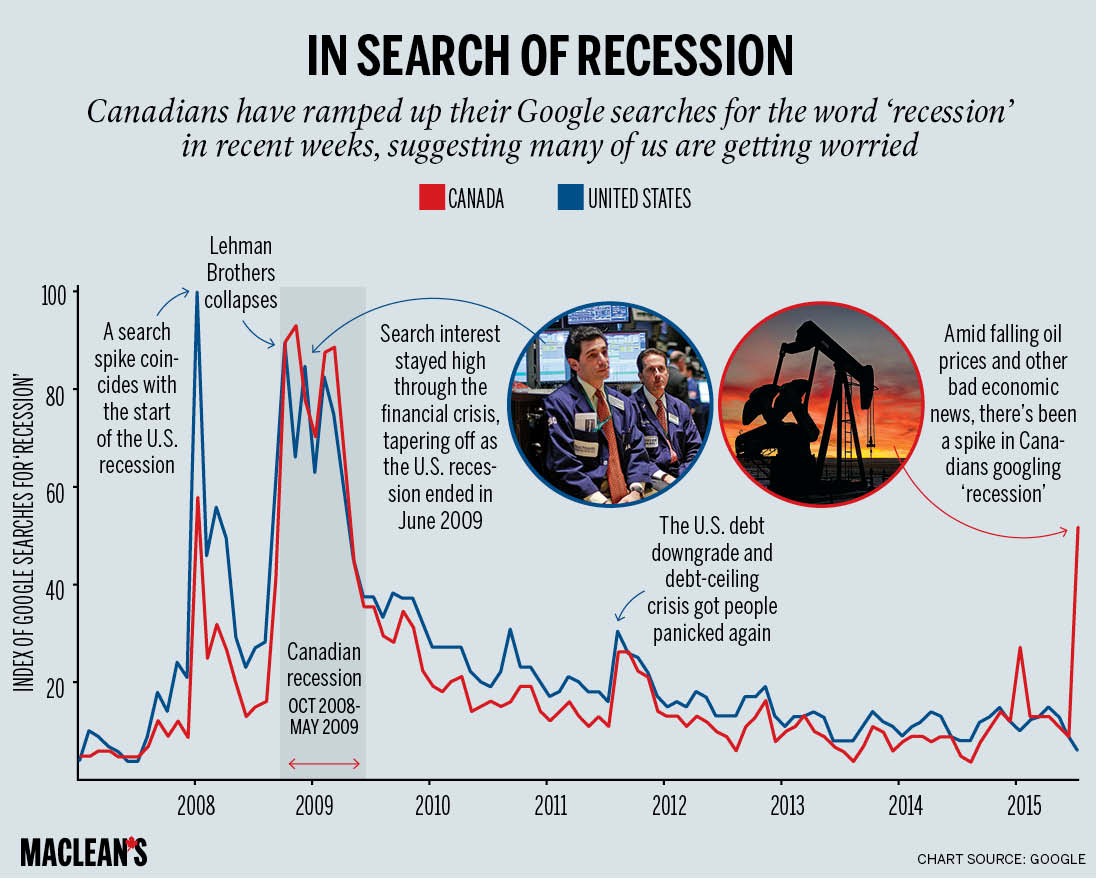 The search engine’s trend tool (which measures interest in search terms relative to their all-time peaks) is an excellent gauge of what’s on people’s minds, and the recent spike in “recession” searches may be an indicator of what’s to come. (Sidenote: A similar spike in January 2008 coincided with the start of the U.S. recession, yet, at the time, bankers, politicians and many economists were still claiming a recession could be avoided.)

This isn’t to say there’s a straight line between fear and recession. If that were the case, the U.S. would surely have suffered another bout in 2011. Anxiety was high and recession warnings abounded. Standard & Poor’s had cut America’s credit rating in the face of rising deficits and slowing growth, the spreading sovereign debt crisis dominated headlines, and Americans were losing faith in their country’s ability to recover. But, in the end, the U.S. economy powered through. (Another sidenote: Even in 2011 when U.S. recession forecasts were rampant, Americans weren’t as focussed on the R-word as Canadians are now.)

Yet there are huge differences between the U.S. then and Canada now, and they don’t bode well for us. Manufactured political crises such as the debt-ceiling debates heightened American uncertainty at the time, and masked genuine improvements. Yet, in Canada, the oil crash that began in mid-2014 and—after a three-month respite—has resumed its plunge in recent weeks, poses a real and ongoing threat to our resource-heavy economy.

Meanwhile, non-energy exports, which were supposed to save our Canadian bacon, have crumpled.

U.S. households and businesses had also made real progress repairing their shattered balance sheets. Canadian consumers, by contrast, are maxed out. Our economy, with its overreliance on household consumption, has been living on borrowed time and money. Even if the Bank of Canada cuts rates next week, as many expect, the effect will be muted.

When FDR uttered his famous line in 1933 that Americans had nothing to fear but fear itself, the country was in the depth of the Great Depression, seized by “nameless, unreasoning, unjustified terror.” There truly was nowhere to go but up. The same can’t be said of Canada, with its teetering housing market and record household debt levels.

Canadians are right to be afraid of a recession. But that fear is also likely to make things even worse.