How Canada's big banks pumped up the housing bubble

The banks earn big profits off soaring house prices, knowing that taxpayers will clean up the mess if the bubble pops. That has to change.

Royal Bank of Canada Chief Executive David McKay flattered some Bay Street reporters with rare interviews the other day, having just conducted another clinic in money making by guiding his 148-year-old institution to a record quarterly profit of $3 billion. What better time for a banker to subject herself or himself to scrutiny than amidst a flurry of zeroes?

Judging by the headlines, the scribes were either underwhelmed or uninterested by what McKay had to say about banking. He made news by talking about Toronto real estate. Not so long ago, Royal’s chief executive was fairly sanguine about Canada’s big-city housing bubble. “We feel good about housing,” McKay said in 2015, even as institutions such as the International Monetary Fund and the Bank of Canada warned of trouble. He now sounds uneasy. He flagged for the Financial Post a “somewhat dangerous mix of catalysts” that are pushing prices higher, including the rich international buyers that Vancouver chased away last year with a 15 per cent tax to deflate its housing bubble. “You’re seeing 20 per cent house-price growth in a market where you shouldn’t see that much,” McKay said of hometown. “That’s concerning. That’s not sustainable. Therefore, I do believe we are now at a point where we need to consider similar types of measures that we saw in Vancouver.”

McKay told the Globe and Mail almost exactly the same thing, so we should assume the intervention was planned. It surely annoyed the Toronto Real Estate Board, which on March 3 reported that the average selling price of a detached home in the Greater Toronto Area was $1.2 million in February, a 32.5 per cent increase from a year earlier. The board’s president, Larry Cerqua, went on at length in a press release about how the incredible price increases have little to do with global plutocrats seeking havens, and almost everything to do with limited supply and strong demand, especially from first-time home seekers. “To date, the provincial government and municipal governments have resisted the implementation of a foreign buyer tax in the absence of empirical evidence,” Cerqua said (though on Thursday Ontario indicated it might consider a foreign buyers tax after all). Citing a recent survey of his members that suggested international buyers accounted for only 5 per cent of demand, Cerqua added that, “the solution to strong rates of price growth and related affordability concerns lies not with taxing foreign buyers more, but rather with addressing the supply of homes available for sale, or lack thereof.”

It might be fun to hold Cerqua to account; but honestly, there would be little sport in it. So let’s stick with McKay, given the leaders of Canada’s banking oligopoly so rarely expose themselves to scrutiny by the broader public. The Big Six are the beating heart of a financial system that favours real estate over more productive investment, such as lending to entrepreneurs. They pushed the cheap, post-crisis mortgages that have turned Canada into one of the most indebted countries in the world. There have been no shortage of studies making this point. Just this week the Basel, Switzerland-based Bank for International Settlements, or BIS, updated a series of numbers it considers indicative of financial stress. The BIS tracks four “early warning” indicators of stress in domestic banking systems, and Canada was the only country that triggered red lights in three of the four. Private credit in Canada is 17.4 per cent larger than economic output, second only to China, where debt is 26.3 per cent greater than gross domestic product. (The BIS starts to worry when the credit-to-GDP gap exceeds 10 per cent.) Canada’s property prices are 11.6 per cent greater than what the BIS calculates as trend, one of the widest gaps in the world. The calculations also raise questions about whether Canada could manage a sudden increase in interest rates of just 2.5 percentage points. That’s an unlikely scenario, but the BIS likes to run the numbers to gauge a country’s ability to make its debt payments. Only Canada, China, and Turkey tripped the alarm.

In a rational world, the banks could be counted on to help contain the housing mania that has put Canada in this perilous situation. Before the early 1950s, Canada’s biggest lenders had little interest in real estate, according to Charles Calomiris and Stephen Haber, the authors of Fragile by Design, a highly praised international history of the interplay between politics and banking. That changed after William Lyon Mackenzie King created the Canada Mortgage and Housing Corp. at the end of the Second World War to backstop the construction of new homes for returning soldiers. Nothing stirs a banker like risk-free lending. By 1954, the banks had convinced the government to change their charters so they could join the post-War building boom. In 1992, they were cleared to buy the trusts that were the initial beneficiaries of CMHC’s backstop, triggering the consolidation that cemented today’s oligopoly. In November 2015, the average monthly holdings of mortgages at Canada’s chartered banks exceeded $1 trillion for the first time. The figure continues to climb, reaching $1.07 trillion in December, according to the Bank of Canada’s most recent statistics. That’s more than double what the chartered banks commit to business lending.

Indeed, the banks are clearly aware of the optics of this imbalance—on Thursday every major financial institution in the land pooled together to announce a $500 million fund to extend loans to entrepreneurs, because banks lending to new businesses is now apparently something worthy of special announcement. 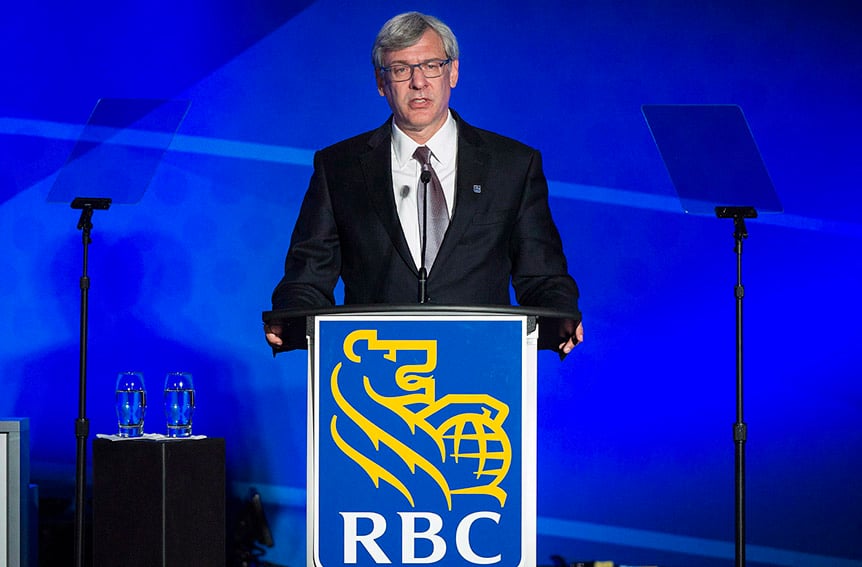 Royal’s stock price is about 36 per cent higher than it was a year ago, so the chief executive is doing something right. But let’s not make him a hero for taking on the likes of Cerqua. Besides international buyers, McKay’s list of “dangerous catalysts” includes ultra-low interest rates, limited supply, and speculators. He appears to have omitted at least one big one: himself, and his counterparts at the other big banks. By attempting to shift the spotlight to international buyers, McKay diverts attention from Bay Street’s role in inflating the bubble. The banks have been loading up on mortgages, secure in the knowledge that the publicly owned CMHC will cover most of any losses. Too cynical? Let’s ask McKay. You may recall hearing something about the “short Canada” investment strategy a couple of years ago. Some American investors observed what was going on in Canada and were reminded of their recent housing meltdown. They took a look at the banks’ bloated mortgage portfolios and decided they could make money on bets that institutions such as Royal and Toronto-Dominion Bank were headed for trouble. And for a while the share prices of the banks suffered. In 2015, McKay went to New York with a message for Wall Street. He told an audience of finance professionals that the speculators who thought his bank would be severely hurt by a wave of defaults were missing something about the way finance works north of the border. “What we keep trying to educate is our first loss is covered by government guaranteed insurance,” he said.

That comment is one of the clearest articulations you will ever read of what economists call “moral hazard,” a situation where one party takes part in a risky transaction because he or she knows his or her losses will be covered by someone else. A subtle version of moral hazard was at work ahead of the financial crisis. The U.S. government insisted that it wouldn’t bail out the banks, but no one believed it, so outfits such as Lehman Brothers Holdings Inc. carried on as if they had little to lose. Canada is different in that the moral hazard is codified in the laws and standards that guide CMHC. We just don’t talk about it nearly as much as we should.

I am resisting calling McKay a hypocrite because I’m unsure he is one. His job is to make money for his shareholders, which he does exceedingly well, and he is only playing by the rules as they exist. So far, that system has avoided the periodic financial meltdowns that plague the United States. Meanwhile, CMHC has made hundreds of millions of dollars from its insurance products, and most of that money ends up in the federal treasury.

But if McKay and his counterparts in the oligopoly aren’t hypocrites, they certainly are barriers to change. They have done little on their own to deflate the housing bubble, and instead call on the government to regulate prudent home-lending practices that they apparently are incapable of implementing on their own. You will hear Canadian bankers talk of the importance of financial stability, yet they routinely have engaged in price wars to maintain their shares of the mortgage market. Again, they are doing this because they bear so little of the risk. A bank executive who failed to exploit risk-free profits to the full likely would be fired.

It took years, but Ottawa may finally be on the verge of reducing the moral hazard in home lending. In October, Finance Minister Bill Morneau said he would explore changes that would require mortgage lenders to accept a greater share of the pain when mortgages default. Morneau proposed requiring lenders to pay the equivalent of a deductible, either a fixed amount or a proportion of the total loss. The Finance Department currently is holding public consultations of the matter.

The banks, of course, are pushing back. As McKay called for a Toronto tax on international homebuyers, the Canadian Bankers Association, pleaded with the government to achieve its goals in a way that wouldn’t so disrupt the business models of its members. The association, which represents Royal and the other big banks, suggested allowing private mortgage insurers to buy reinsurance or allowing the banks to issue more of a type of bond that bundles home loans into single securities. These proposals might possibly reduce taxpayers’ exposure to mortgage default, but they would do nothing to reduce the incentive of Canada’s biggest banks to push mortgages. Will Ottawa listen to the banks’ entreaties? We’ll likely find out when the budget comes down March 22, but in the meantime it’s worth noting that the new multi-bank backed growth fund launched this week is a political creature spawned out of a meeting between bankers and Morneau in December and has all the makings of a “sorry” for inflating the housing bubble.

Bankers such as McKay clearly are growing uneasy about the debt monster they helped to create, but not so much that they are willing to give up feeding it. The reward from inflating the housing market is still too great, while it will be the rest of us who will suffer the consequences if the bubble pops.