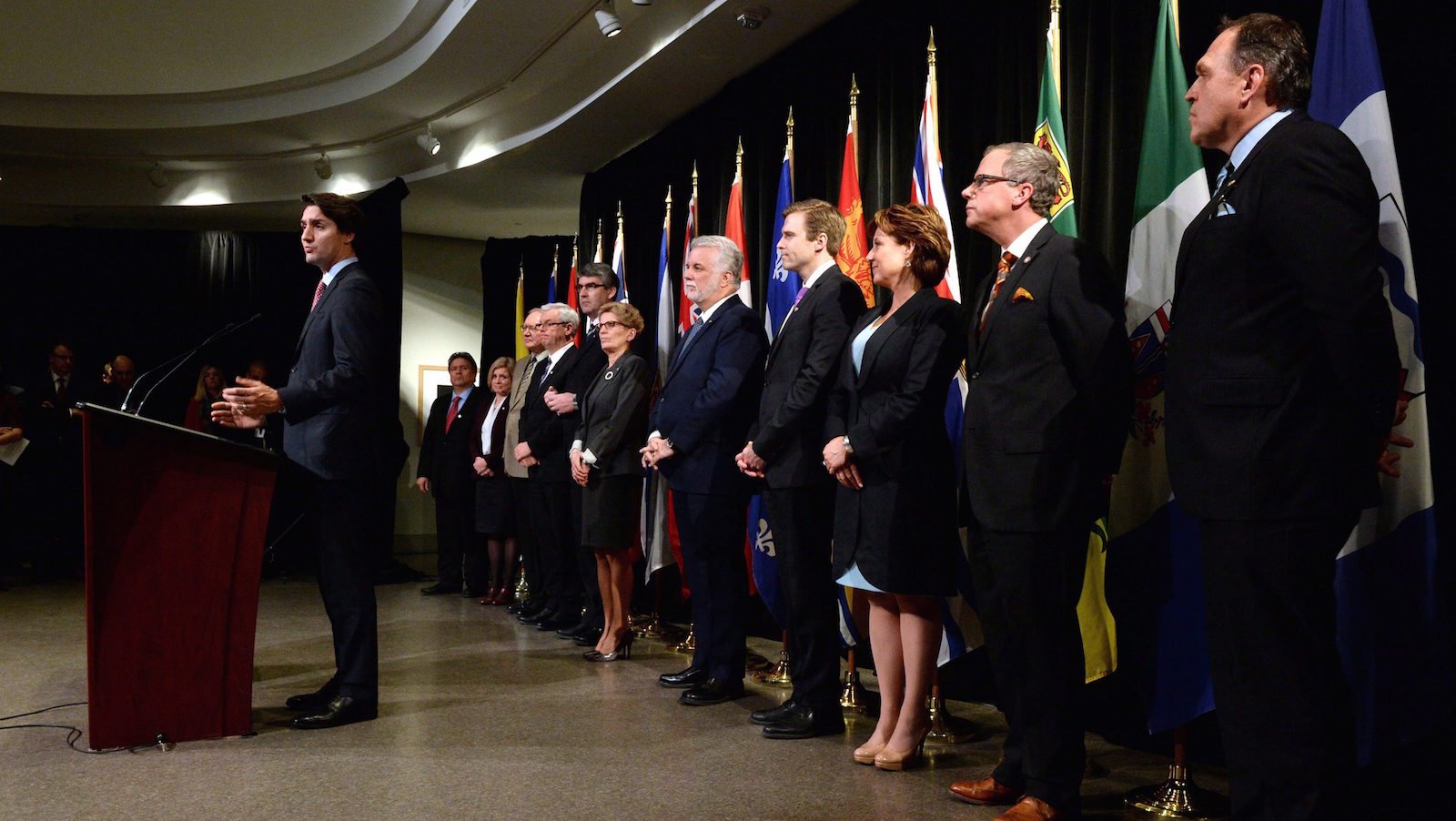 Prime Minister Justin Trudeau, left, talks after meeting with premiers at a First Ministers meeting at the Canadian Museum of Nature in Ottawa on Nov. 23, 2015. THE CANADIAN PRESS/Sean Kilpatrick

The Prime Minister and premiers look like they may be on the verge of adopting a national carbon pricing system, if not at the First Ministers Meeting in Vancouver, then by later this year. If reports are true, the federal government will seek to establish a floor price on carbon emissions. Provinces will either be able to bring in their own system that meets the floor price—and keep all of the associated revenues—or the federal government would step in and impose carbon pricing in that province. This would give provinces a strong incentive to bring in their own pricing mechanism.

If Canada is to have any hope of meeting its Paris commitment established by the Harper Conservative government—a 30-per-cent reduction in greenhouse gas emissions below 2005 levels by 2030 – we will have to have a strong national system of carbon pricing in place sooner rather than later. The federal government is wise to let the provinces take the lead and keep any revenues raised within their provinces, but there must be some minimal national standards. In particular, federal and provincial governments should agree on a base price and rate of increase.

Unfortunately, the suggested minimum price of $15 per tonne would not put Canada on a trajectory to meet our targets. B.C. already has a carbon price of $30 per tonne which has been frozen at that level since 2012. Alberta will have a $30 carbon price by 2018. Quebec, soon to be joined by Ontario and Manitoba, are part of the Western Climate Initiative cap and trade system with California. But so far, allowances under the Quebec-California system have been selling close to the floor price, which is currently $12.73 US (about $17.50 Canadian at today’s exchange rate). This floor price is set increase at a rate of five per cent each year, thus it won’t reach $30 U.S. until around 2030.

Related from Mark Cameron: Build pipelines or curb emissions? Canada can do both.

Most estimates of what it will take for Canada to meet its 2030 target show that carbon prices will have to reach $100 or more by that time. Starting at $15 with Canada’s two largest provinces tied to the low floor price set by California means we are unlikely to reach those levels. On the other hand, if we start at a $30-per-tonne price with increases in the range of 10 per cent each year, carbon prices will reach about $100 per tonne by 2030—thus making it possible for Canada to meet our climate goals.

For Canada to get this right, we need to start at a high enough level, and have a predictable rate of increase that will enable us to meet our 2030 goals. The first ministers may be wise to establish an independent body of experts to determine the floor price and rate of increase necessary for Canada to meet its 2030 goals, like the Canada Employment Insurance Commission sets the rates for EI contributions at a level sufficient to keep the Employment Insurance fund in balance.

Of course, few would accept carbon prices that help Canada meet our climate goals at the expense of stifling our economy. Many will argue that carbon prices of $100 or more are unaffordable and would be a drag on economic growth. And that would be true, if governments simply kept those revenues in their own coffers. But recycled into tax reductions, as the B.C. example has shown, could protect households from the impact of carbon pricing while giving a competitive boost to the Canadian economy. A $100-per-tonne carbon tax could bring in over $40 billion per year in revenues by 2030. That would be enough to eliminate the GST or corporate income taxes entirely, or cut personal income taxes by about a third, or give every Canadian a tax credit or rebate of over $1,000. Most likely, governments would offer some combination of these options, for example, protecting lower and middle-income households through direct rebates while cutting personal and corporate income taxes to improve economic competitiveness. But the point is carbon taxes do not have to be a drag on the economy. In fact, they can be a path to reducing our emissions while making the Canadian economy stronger and more competitive.

Let’s hope the premiers will put Canada on track to meeting our climate goals and strengthening our economy. The best way to get there will be to start at the price level B.C. and Alberta are already committed to, increasing that price in a regular, predictable manner, and refunding every dollar raised in carbon revenues as tax cuts or rebates to Canadian households and businesses. If we do this now, nobody will be able to look back in 2030 and say that we didn’t get it done.

Mark Cameron is the Executive Director of Canadians for Clean Prosperity, an organization working to build a Canada where a strong, competitive economy coexists with a clean, sustainable environment.