With the budget, the Liberals have taken a page out of the Conservative plan for program expenditures. But there are many reasons to think it won't work. 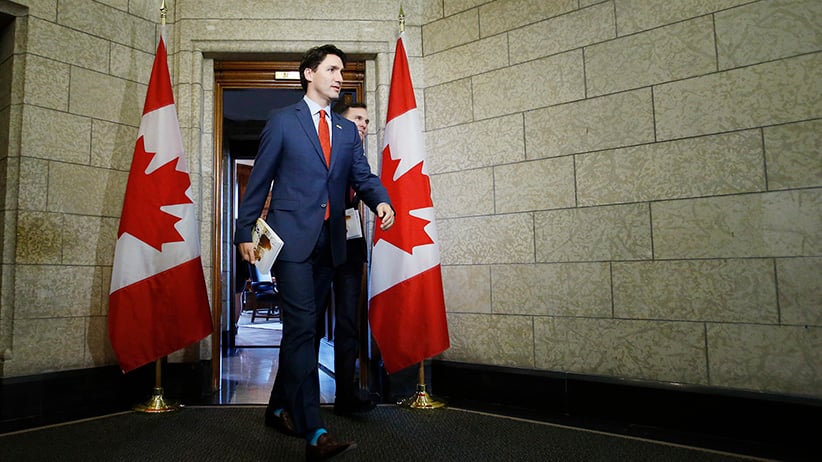 The Government will set a timeline for balancing the budget when growth is forecast to remain on a sustainably higher track.

That sentence on page 53 of the 2016 budget plan has been seen by many—including myself—as an admission that the new Liberal government didn’t really know how it was going to balance the budget, and that they’d be getting back to us when they figured something out. I’m now not so sure that this is the correct interpretation.

To be sure, it wasn’t an unreasonable inference to draw. A fair bit of detail was provided for new spending measures over the next two years, but not for the last three years of the planning horizon. Moreover, the use of the word ‘when’ suggests that the Liberals aren’t prepared for the eventuality that growth forecasts may not improve. I didn’t pay much attention at first to the numbers for 2018-2021, even though they showed the deficit closing over time. I didn’t think they were a plan, more like an artist’s impression of what a plan might look like. 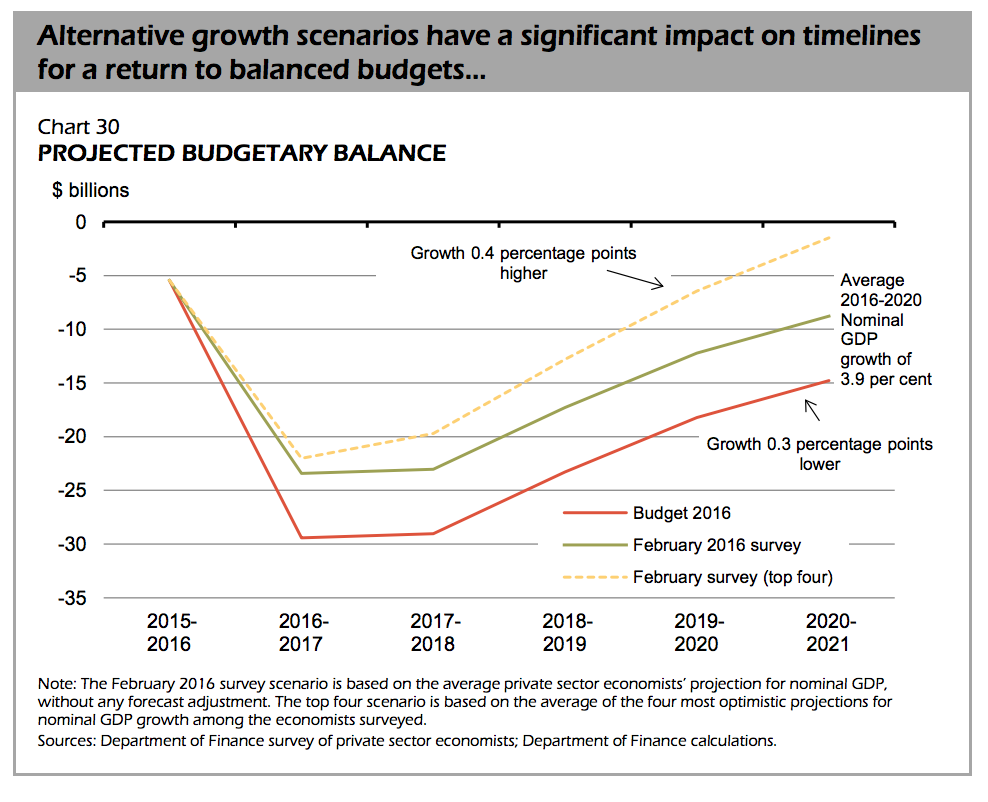 The confusion, I think, revolves around the use of the word ‘timeline.’ What if the Liberals do have a plan to balance the budget, but they’re just not sure when the plan will actually come to fruition? This would explain the use of the word ‘timeline,’ as well as the occasional mention of the possibility that the budget will be balanced in five years.

When you look at the projections for the the last three years of the budget’s planning horizon, a familiar pattern emerges. Program expenditure growth—and in particular, growth in direct program expenditures—is set to decelerate sharply after the surge in spending in the two preceding years. If the economy—and hence government revenues—grow more quickly than expenditures, then the deficit will eventually close as the economy grows. Exactly when it will close depends on economic growth rates over the next few years.

If this strategy sounds familiar, it should: it’s the same one the Conservatives set out in the 2010 budget and applied faithfully throughout its last mandate. The parallels are quite striking: 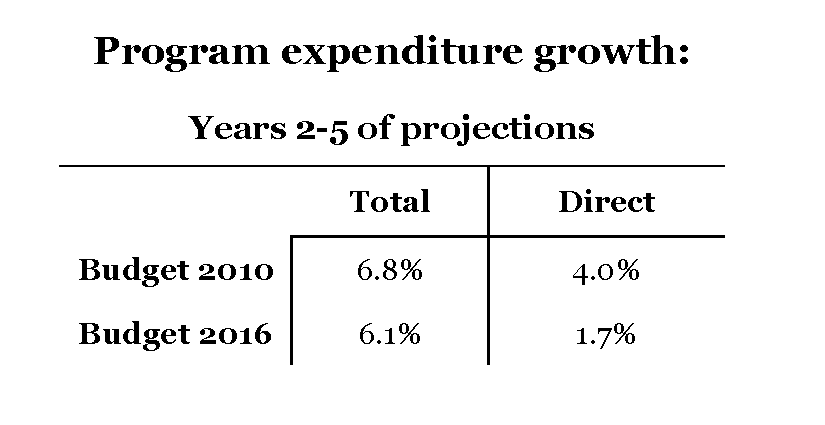 The Liberals’ plan in 2016 is to hold an even tighter grip on direct program expenditures—that is, spending on salaries, goods and services—than the original Conservative plan in 2010. 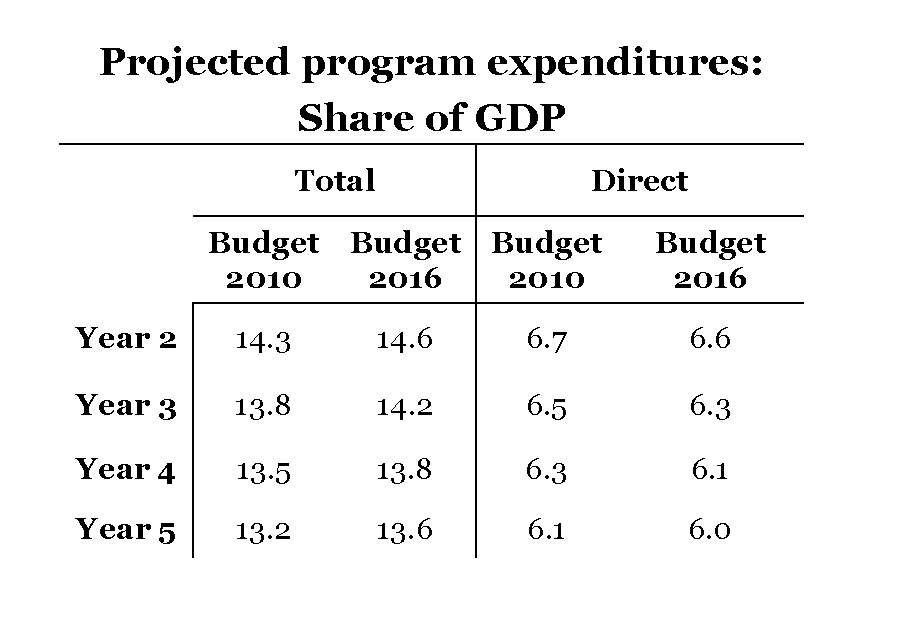 There’s no real problem with the arithmetic involved in this sort of deficit-reduction strategy. The issue is political will. When I first wrote about the Conservatives’ plan to return to balance back in 2012, I was skeptical:

The strategy is to hold direct program spending constant—which means a reduction in terms of share of GDP—and letting transfer programs grow with GDP. Revenue growth—personal income tax revenue growth in particular—is supposed to close the gap between spending and revenues (Table 5.8 of the budget).

I have my doubts about whether that plan will last four years: that’s a long time to sustain a regime of continual program erosion (“cuts” doesn’t seem to be the right word). Stuff happens.

As we all know, Stephen Harper’s government did turn out to be equal to the task of holding the lid on spending, and it presided over a steady decline in federal government spending as a share of GDP.

I’ve already been proved wrong on this point once before, but I’m even more skeptical about the Trudeau Liberals’ political will to carry out their deficit plan. Even though their political base was broadly supportive of austerity, the Conservatives were coy about telling Canadians what exactly was being cut. But after releasing the results of the Conservatives’ program review and after making repeated commitments about transparency in government, the Liberals will be hard-pressed to make use of the Conservatives’ tactic of making cuts, telling no-one and hoping that nobody notices.

More importantly, the Liberals just fought and won an election based on a campaign that promised to end years of grinding Conservative austerity. It seems unlikely that they’ll be able to smoothly throw that messaging into full reverse in the third year of their mandate.