When it comes to tackling Alberta's fiscal problems, everything should be on the table in the provincial budget on April 14 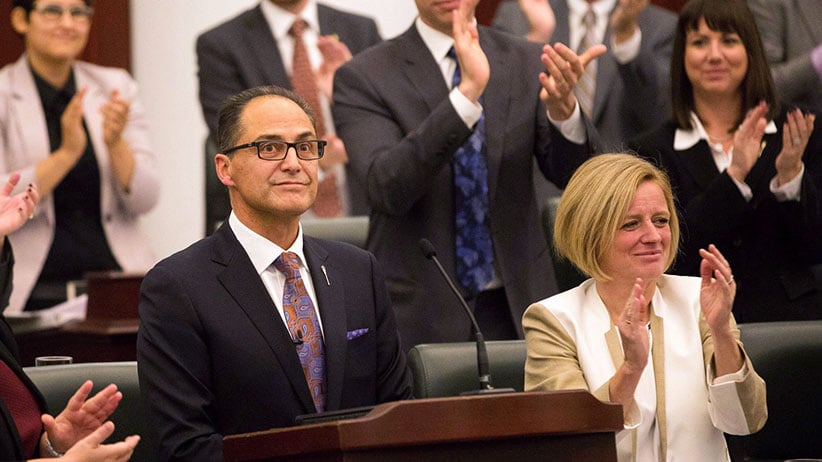 How big is $10 billion? “It’s a lot. It’s a hell of a lot of money.” That’s how Alberta’s Finance Minister Joe Ceci described the potential size of Alberta’s upcoming deficit. He’s right.

It’s roughly as much as all personal income taxes in Alberta. It’s more than any ministry spends, except Health. It means 20 cents of every dollar spent by the government will be borrowed. And at 3.2 per cent of GDP, this deficit fits right in with those of Don Getty. The seven budgets between 1986-87 and 1992-93 averaged deficits of 3.7 per cent of GDP.

Of course there is much (much) more to a government’s budget than just the headline deficit number. To put it all in perspective, here’s a simple Sankey diagram. (I used SankeyMATIC and the third-quarter update data.) 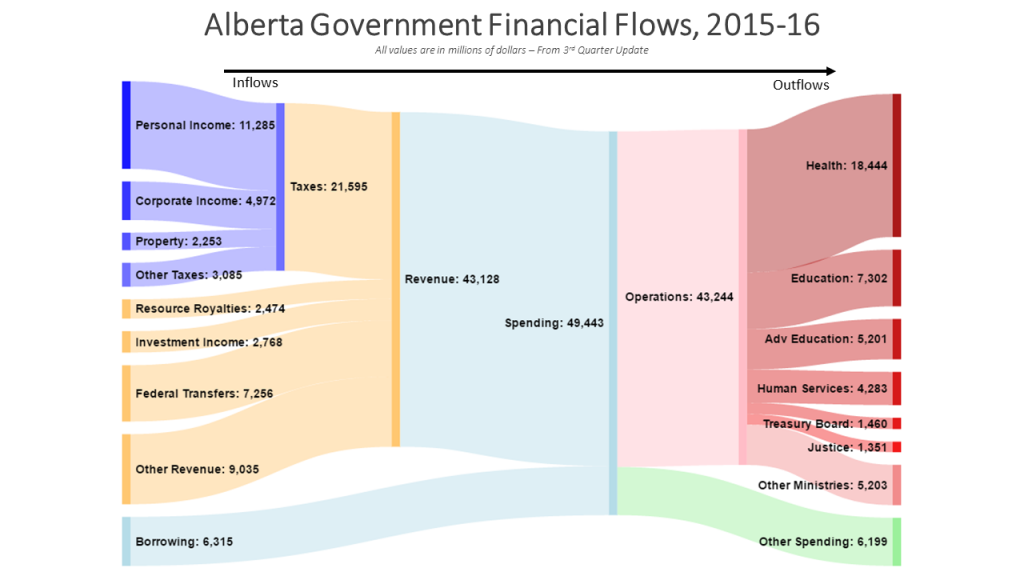 Billions of dollars flow into government on one end, then flow out the other. The inflows are various taxes, investment income, resource royalties, transfers from the federal government, a wide variety of fees, tuition, and so on. On the spending side, health, followed by education, makes up the vast majority of government spending. In fact, more than 80 per cent of operating spending is in the top four ministries.

Borrowing is simply the difference between what flows in and what flows out. Unfortunately, the “Resource Revenue” inflow is much smaller than it used to be. Hence, the deficit. And if you want to do something about that, then you’ll need to either increase revenues, decrease spending, or some combination of the two.

Many will say “it’s a revenue problem,” while others say “it’s a spending problem.” Those positions each provide some perspective, and both have truth behind them, but the problem is more general: Alberta has a budget problem.

The deficit as a choice

As energy prices rise and fall, so does Alberta’s provincial revenues. Up under Lougheed, down under Getty. Up under Klein, down under Prentice and again under Notley.

We’re on the royalty roller coaster, folks. Having fun? Or getting sick?

Past PC governments were having fun, so made no attempt to get off this wild ride. Premier Notley does say she wants off. But actions speak louder than words, so hopefully we will see a plan in the next budget.

What is required? Simple: save more (even all) of our royalty revenues. Or balance the books at low oil prices—and save any surpluses.

What won’t work are government subsidies to favoured businesses. They were a staple of past PC governments, and have found new life in the NDP. Whatever you may think of the merits of such projects or other “diversification” initiatives, such measures will do nothing to help the government’s bottom line. They have nothing to do with the rollercoaster that counts.

The budget is the real problem, and tinkering along the economy’s periphery is a mere sideshow.

Of course, there’s no need for sudden or drastic changes to fill our budget’s hole. Knee-jerk reactions to Alberta’s deficit are as unnecessary as they are unwise. Alberta’s fiscal situation remains strong. With a lower net debt per person than any other province by far (see below), we have time to make sensible choices. 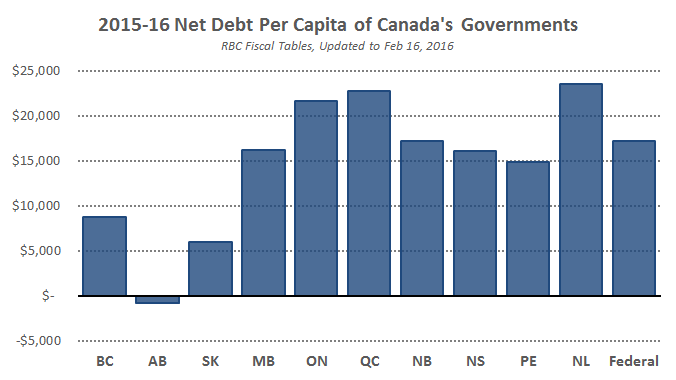 The challenge will be to put forward a credible plan to get out of deficit. Gradually, realistically, and sustainably.

But if we forgo resource revenues, how will we fill the gap? Perhaps new revenues, such as an HST, or perhaps spending controls. Ideally the compromise solution is a package that includes both.

Alberta brings in far less revenue from its massive tax base than any other province. Nothing demonstrates that our deficit is a policy choice better than this graphic from the October budget: 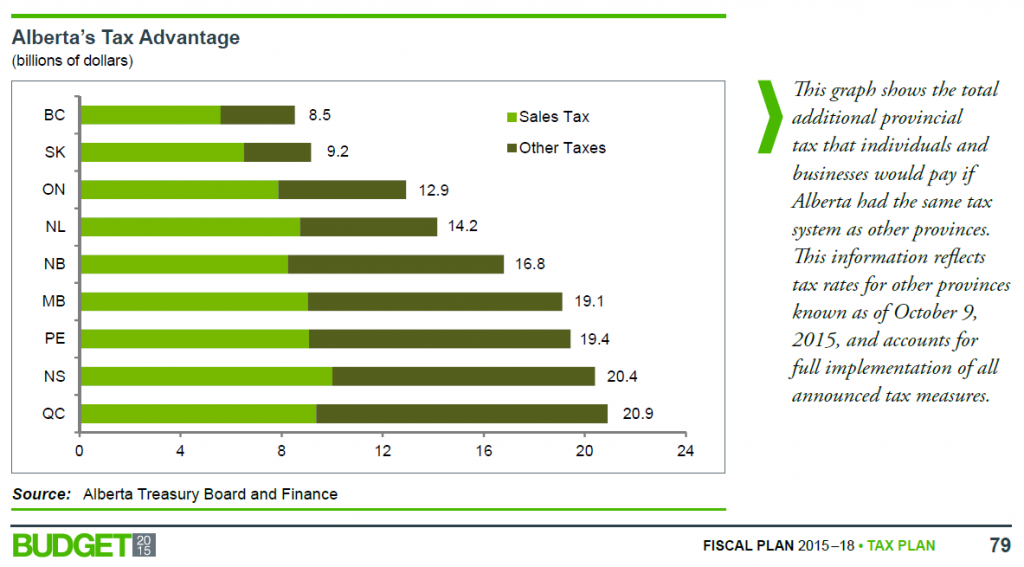 It shows that Alberta could raise roughly $8.5 billion in additional revenue if Alberta adopted B.C.’s taxes, or more than $9 billion if we adopted Saskatchewan’s.

As a quick side note, this is like the “fiscal capacity” behind the “have” or “have-not” provinces in the equalization formula. Alberta is not—and is nowhere close to becoming—a have-not province. Our ability to raise revenue (whether we choose to do so or not) is massive. We are very (very, very) far from being a have-not province—even today.

But we shouldn’t raise revenue from just any source. We should use stable and efficient taxes. A sales tax is the answer (specifically, an HST…. not a PST). According to recent research by Jack Mintz and Philip Bazel—of the University of Calgary—royalty revenues are nearly four times more volatile than sales tax revenues. A sales tax also beats income taxes. In terms of efficiency, sales taxes are also far less damaging to the economy (see Table 2 of this paper by Bev Dhalby and Ergete Ferede).

Raising revenues isn’t the only solution. Large resource revenues probably create a political incentive for inefficient spending. After all, why worry about costs when it’s raining money? (That, I suspect, is why everyone loves premier Lougheed—he had it easy.)

Let’s compare Alberta’s spending to other large provinces. Recently, Ron Kneebone and Margarita Wilkins—also of the University of Calgary—did just that. (See their published paper here, and the data here.) 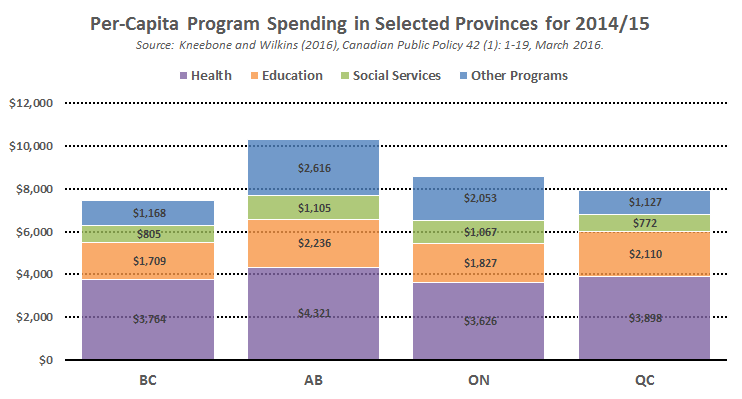 Looking at this graph, a certain song comes to mind. (Note: these numbers are different than the RBC Fiscal Tables. I use the Kneebone and Wilkins (2016) data because they break down spending categories in a consistent and comparable way across provinces. Also, this comparison critically depends on whether you look at spending per capita, or spending as a share of GDP.)

These differences in per-capita spending are large. If Alberta had the same per-capita spending as Ontario, for example, our deficit would shrink by $7 billion. Though there may be many good reasons why our costs are higher—our wages are higher than elsewhere, for example. So saving the full $7 billion isn’t likely feasible. (For more spending comparisons, this report is helpful.)

The elephant in the room is health. Not only is it the largest ministry of government—by far—but it’s also one of the costliest health care systems in the country. I’ve plotted a comparison below of the four largest provinces, and also included the two other Prairie provinces to show there’s something different happening in Alberta. 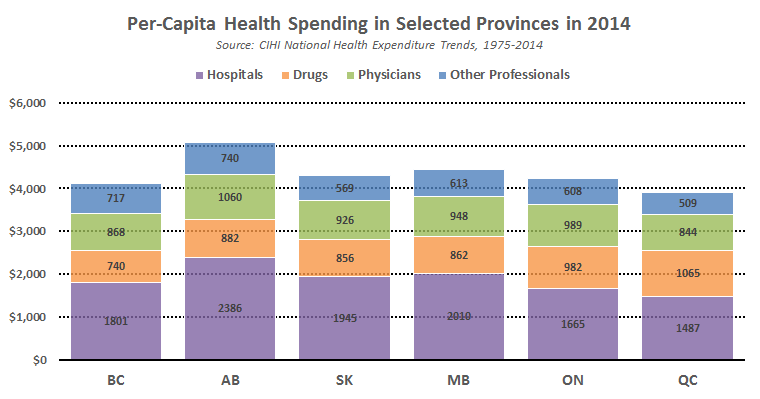 This is very odd. Our population is years younger than others, and the fraction of people over 65 is far lower than other provinces. This should lower health care costs, not raise them.

The government knows all this, and they are hoping to “bend the curve” on health care costs. Will they announce changes to physician compensation? Or consolidations of our aging and under-utilized rural hospitals? Or changes to procurement policies, or any number of other necessary reforms? Hopefully we will find out in the budget.

Revenue tends to grow with the province’s economy, which is typically faster than the rate of population growth and inflation. If the province holds its spending growth below this level, then eventually the deficit will be eliminated. The critical question is: how much debt will we accumulate in the meantime and how much will interest costs rise? This matters. Every dollar spent on interest payments is a dollar unavailable for more valuable uses.

To explore this, I’ve very roughly guesstimated interest costs under a few scenarios. Let’s say revenues grow by one per cent between 2016-17 and 2017-18, then by five per cent thereafter. (For comparison, the government’s October budget had six per cent average revenue growth to 2020, but was based on some optimistic oil price assumptions.)

On the spending side, the government’s last budget had an average spending growth to 2020 of 2.3 per cent. I’ll make this one scenario. Another is for spending to grow with population and inflation. Finally, consider a rough approximation for two opposition alternatives. For the Alberta Party, I’ll illustrate growth of zero per cent, 0.5 per cent, then one per cent until the budget is balanced. For the Wildrose Party, Brian Jean announced he’d like to lower spending four per cent over two years. I’ll presume a spending freeze after that. For all scenarios, I’ll stop once the deficit is eliminated. (Obviously, this is just an illustration and oversimplifies the various plans.)

Unless revenues grow faster than five per cent, the government’s 2.3 per cent spending growth trajectory will balance the books in 10 years or so. No wonder they abandoned plans to stick to their 2019-20 goal.

How well do opposition parties do? The Alberta Party plan will balance a few years earlier, and the Wildrose plan two years before that. Roughly speaking, no one has a plan that would balance the books by the end of the decade—absent faster revenue growth than the five per cent assumed.

Importantly, no scenario increases the debt service costs beyond six cents for each dollar of government revenue. Ontario, for perspective, currently spends nine. We’re in a strong position, and will continue to be.

Reasonable people can disagree without being alarmist. How to fix the budget is a debate we need to have. Everything should be on the table.

I cannot help but mention one final item sure to receive much attention in the budget: The carbon tax. How large will the revenues be over time? How much will be used to increase spending versus lowering future deficits? How large will any new “clean” infrastructure and technology investments be? How large will the household rebates be to lower- and middle-income families? Will rural areas receive additional rebates? Will the roughly $3 billion in output subsidies to large emitters be explicitly recorded in the budget? The list of questions is long.

For so many reasons, and to so many people, next week’s budget is going to be significant. There are critical questions that the government must, and hopefully will, answer.