How to live with lower oil prices

How the collapse of oil prices is impacting the Canadian economy, and what policy makers at the federal and provincial level should do to ease the pain 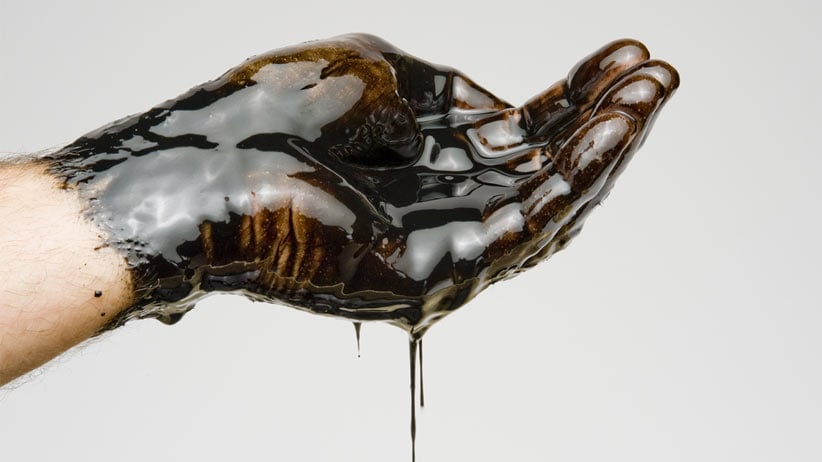 The large and persistent drop in oil prices has been a major hit to Canada’s economy. In this Maclean’s article, many analysts (including me) suggested that this economic development was one of the most important things to watch in 2016. While there are lots of other interesting and important stories unfolding, such as:

I keep coming back to lower oil prices and the massive terms of trade shock they’ve delivered. The result has been a significant loss in our international purchasing power—just ask any Canadian on vacation in the U.S.

When oil prices first fell in the summer of 2014, we knew it would be a significant economic challenge for Canada, but we didn’t know big the shock would be and how long it would last. As time has passed, long-term expectations for oil prices are down by more than a third (H/T Luke Kawa). 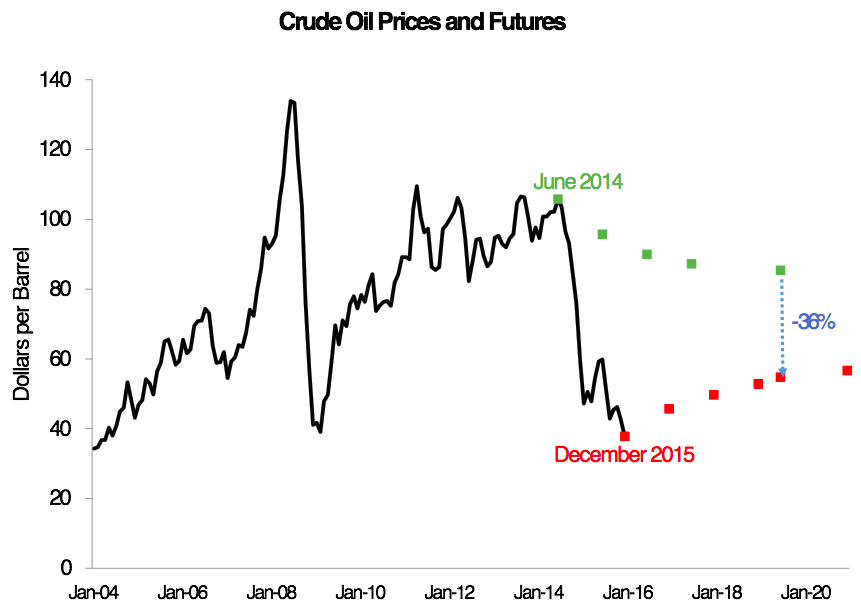 Of course these forecasts are notoriously bad and there’s evidence that using them might be worse than just assuming that oil prices won’t change. But the low prices we’ve lived through over the last year and a half, combined with technological improvements that have fundamentally increased oil supply and changed production strategies, should be a clear signal to policy-makers (and to oil producers) that they would be wise to exercise caution and make their decisions based on longer-run plans that don’t assume a quick rebound in prices.

Back when the severity of the oil price shock was beginning to dawn on us, the Bank of Canada surprised financial markets by cutting interest rates. In its January 2015 Monetary Policy Report (MPR) the Bank quantified the potential fallout if oil stayed at $60 a barrel for a few years, relative to there being no decline in prices. The news wasn’t good. 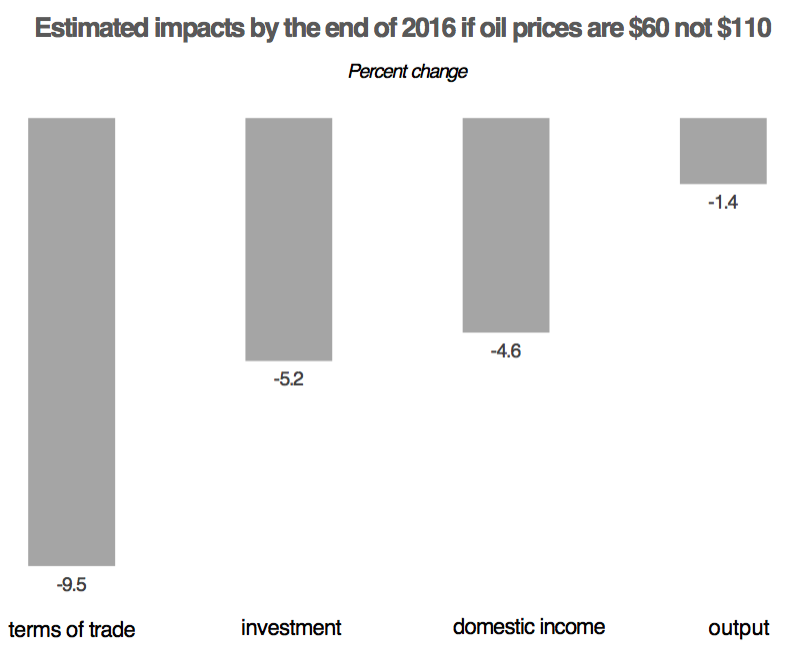 The Bank’s next MPR in April shed light on the massive regional disparities from the shock. Not surprisingly, Alberta is the hardest hit by far. 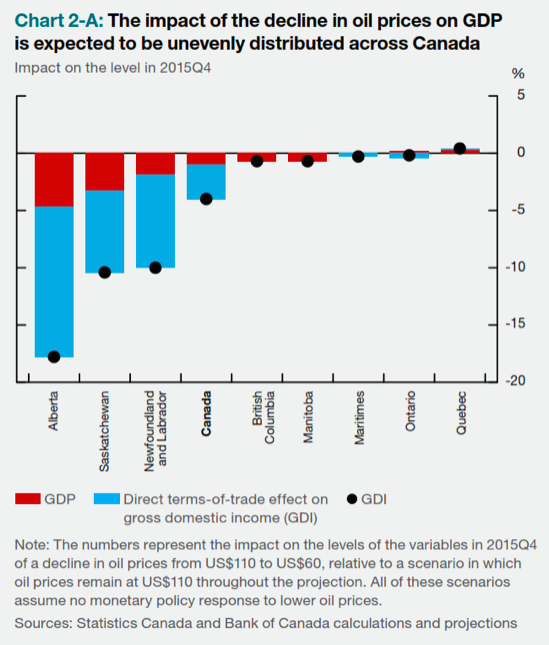 These estimates are also relative to an optimistic counterfactual where oil prices don’t fall (and assume no monetary policy response, whereas the Bank cut rates by 50 bps in 2015). To get another perspective on this shock, compare the paths expected for Canada’s nominal GDP in the federal government’s fall economic and fiscal updates, about one year apart based on surveys of private sector forecasters (in September 2014 and October 2015). 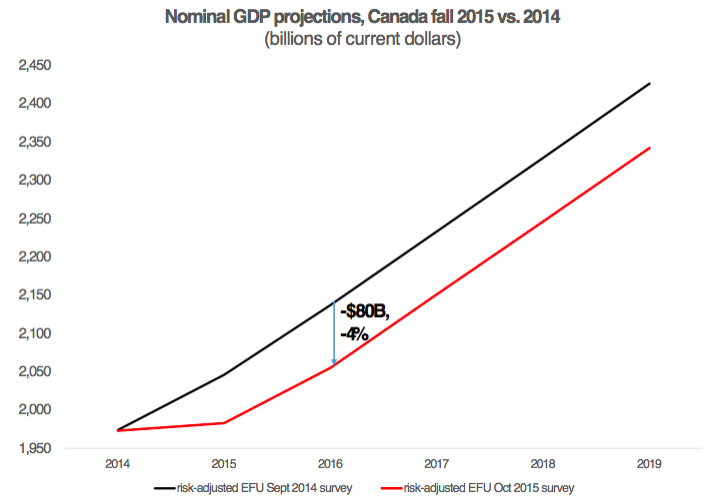 Evidently, lower oil prices are expected to permanently lower Canadian output over the projection. By 2016, the level of nominal GDP is about $80 billion lower, a hit of almost four per cent. The shock to real gross domestic income is even larger because GDI accounts for the drop in our international purchasing power.

As expected, repeating this exercise for the epicentre of the shock in Alberta shows proportionately worse impacts. Nominal GDP is expected to fall by about 10 per cent in 2015 alone (and even this may prove to be optimistic). Moreover, there’s a mark-down of about $40 billion, or a 10 per cent permanent hit, to the level of Alberta’s nominal GDP expected over the next few years. 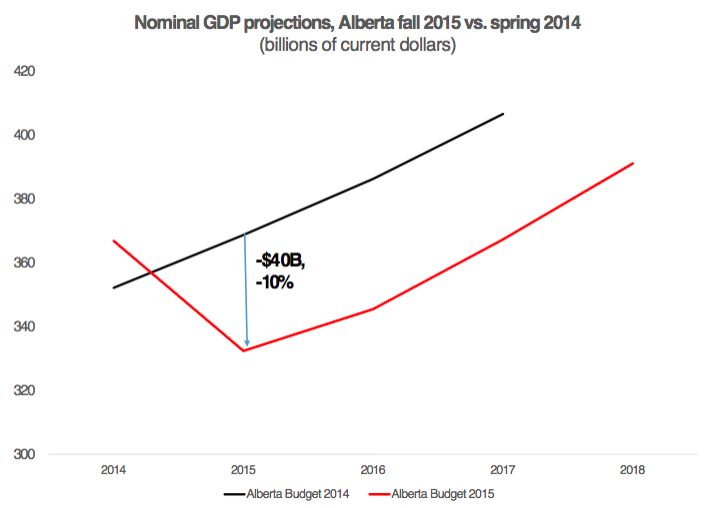 In sum, we’re clearly experiencing a big shock. One that has several important dimensions, some are direct and straight-forward, and others are more obscure.

One obvious impact is that investment in the oil patch has fallen abruptly. It’s down about one-third throughout in the first three quarters of 2015 (though despite a big drop, this level of oil investment could be considered relatively healthy from a longer-term perspective). 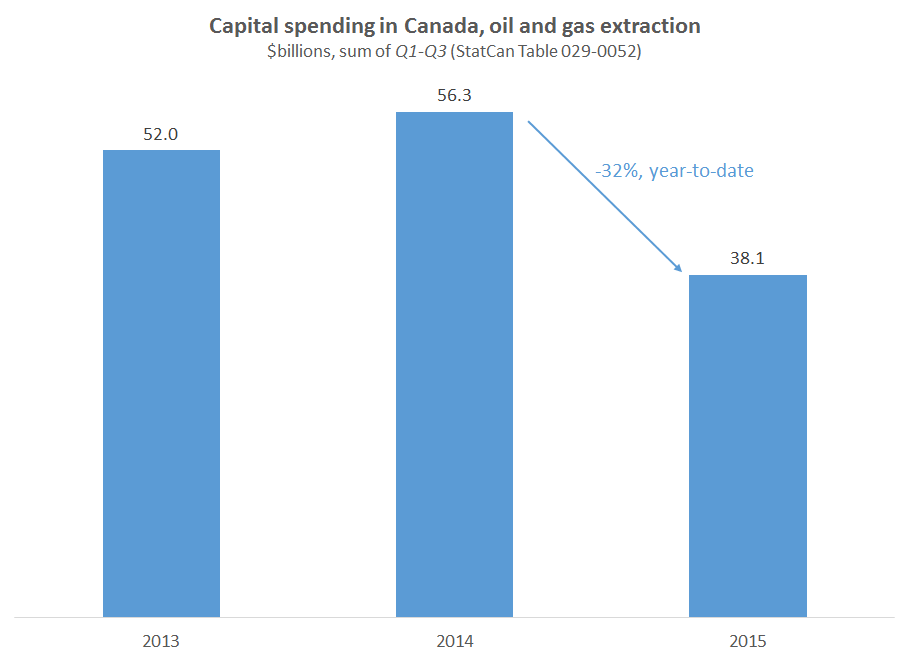 Alberta’s labour market has weakened significantly, and the unemployment rate in the commodity-producing provinces as a whole (Alberta, Saskatchewan and Newfoundland and Labrador) is now higher than in the rest of the country for the first time in over a decade. Job losses have been concentrated in younger workers and men (H/T Trevor Tombe). 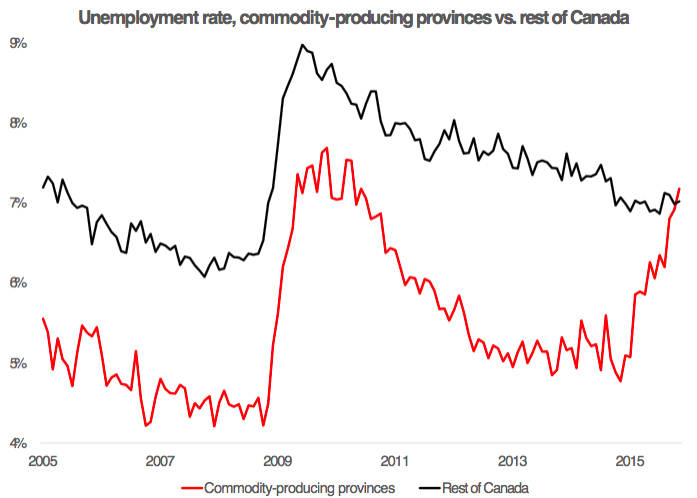 Government finances are weaker. At the federal level, the budget balance is somewhere around $15-20 billion lower over the next five years, possibly more. The proportionate impact on those commodity provinces should be larger.

But there are also other impacts from the oil shock that are less obvious. The fall in investment in Canada means there’s less capital deepening (particularly in the energy sector, but possibly more broadly because the resulting weaker Canadian dollar makes imported capital more expensive). This will likely slow our potential output growth going forward. 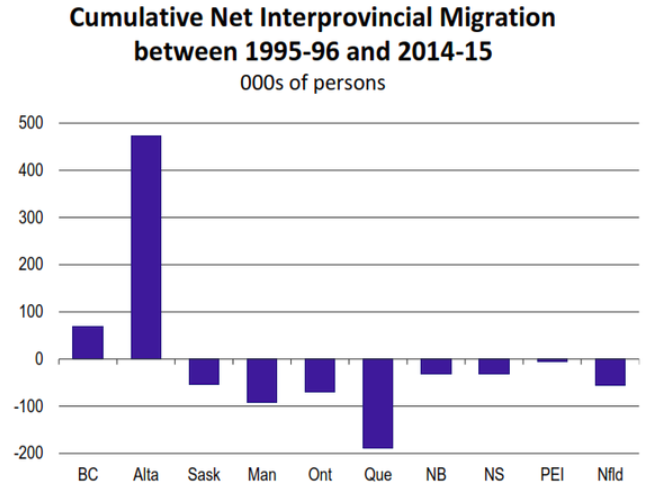 Though there hasn’t yet been an outright reversal (H/T Trevor Tombe again). 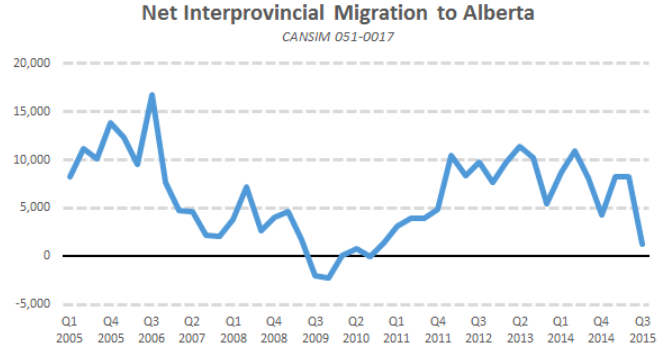 Finally, there may also be impacts on federal-provincial transfers that could reverberate across the federation. For example, with much lower nominal GDP, it’s now possible that health transfers (CHT) may actually need to honour the three per cent funding floor guarantee — something that few would have predicted necessary when changes to the funding formula were announced in 2012. 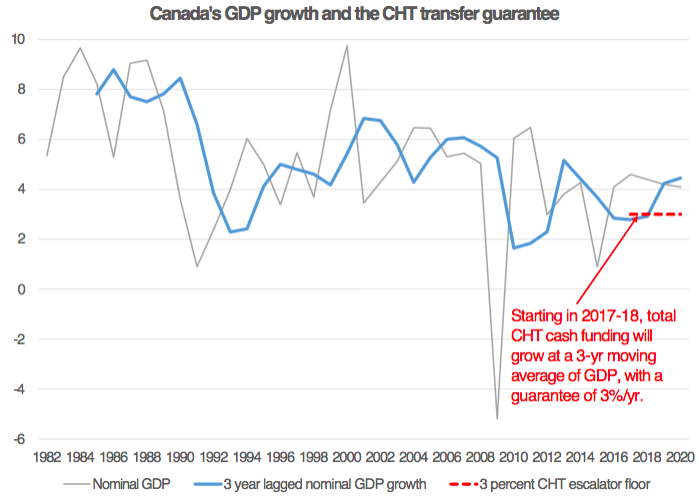 Similarly, because the total equalization budget is tied to nominal GDP growth, it too will slow down significantly for transfers that are tied to the 2015 outcome.

Despite all of this wreckage, arguably the biggest macroeconomic policy response in Canada so far has been to reduce the monetary policy rate by half a percentage point in 2015. On its own, this minor reduction in borrowing costs will have only modest direct effects on the aggregate economy.

However, I suspect that the indirect effects of looser monetary policy, and more generally, the associated depreciation of our exchange rate—which is related to our monetary policy stance, as well as that in the U.S., which is moving in the opposite direction, and other factors—is the most promising way to facilitate our economic adjustment.

The loonie is currently on pace for its second-largest annual decline in recent memory, down 17 per cent versus the U.S. dollar so far this year. (H/T Doug Porter) 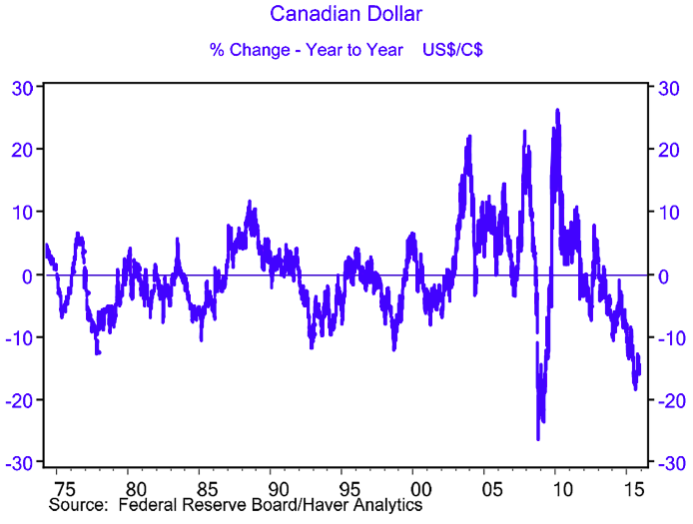 I expect the Canadian dollar will (need to) fall further. I wouldn’t be surprised if it drops below 70 cents as the U.S. starts down its path to raising its policy rate (at the same time Canada’s central bank openly discusses the option of negative interest rates if needed).

Indeed, empirical evidence for a wide range of countries (particularly developing ones) suggests that after large terms of trade shocks—such as Canada is experiencing now—economies with flexible exchange rates do better than those with fixed exchange rates: output falls by less, and the recoveries are faster. Basically, the exchange rate depreciates more. The makes the country’s exports more internationally competitive and helps reinforce the effect that the country’s exports already command fewer imports.

While this sound fine in theory, and for other countries, the big worry is that Canada’s export performance has been extremely disappointing over the past decade—particularly our trade with the U.S. Maybe a sixtysomething-cent loonie is just what the doctor ordered for our ailing exporters. But maybe our export sector—particularly our manufacturers—have lost some of their production capacity in recent years, which means that we won’t be able to bounce back and fully take advantage of the lower Canadian dollar. At any rate, expect our non-commodity-exports to increase their contribution to our overall export growth, but we will have to wait and see what happens in 2016. In the meantime, I’ll be far less annoyed than usual by attempts to “talk down our dollar.”

As Glen Hodgson has pointed out, we should be encouraging provincial policy responses in the three resource-producing provinces to these primarily localized regional shocks that have national spillovers.

This means that fiscal policy, especially in Alberta, should be quite aggressive and expansionary in the near-term to try to cushion some of the blow from this big negative shock, while at the same time, have longer-term discipline. The adoption of new debt targets in the last budget makes sense from this perspective.

Finding the right balance is tricky between short-term stimulus and long-term fiscal sustainability, as we still need to encourage the internal reallocation of capital and labour to other parts of the Canadian economy. But at its core, learning to live with lower oil prices requires a fundamental rethink of how government programs are funded in these provinces. They shouldn’t be overly reliant on resource royalties, which leaves them overly exposed to abrupt commodity price swings.

Quite aside for the issue of the level of taxes, the tax mix should improve by relying proportionately more on taxing consumption to fund current government programs, which provides a much more stable revenue source (as advocated by Jack Mintz and others). Adopting a provincial sales tax at a rate similar to that of its provincial neighbours (or substituting the sales tax for other more distortionary forms of taxes) makes economic sense, even if it is sure to generate political opposition.

Finally, because we simply don’t know where energy prices are going over the long-term, it is far better for our policy-makers, at both the federal level and provincially, to adopt conservative budgeting assumptions for commodity prices and government revenues. If they did, our biggest economic, policy and planning surprises might also be happy ones.