If Trump wants to reduce regulations, he should look to Canada

Trump's order that for each new regulation added, two regulations must be repealed, is not an effective way to cut red tape. Canada has found a better way. 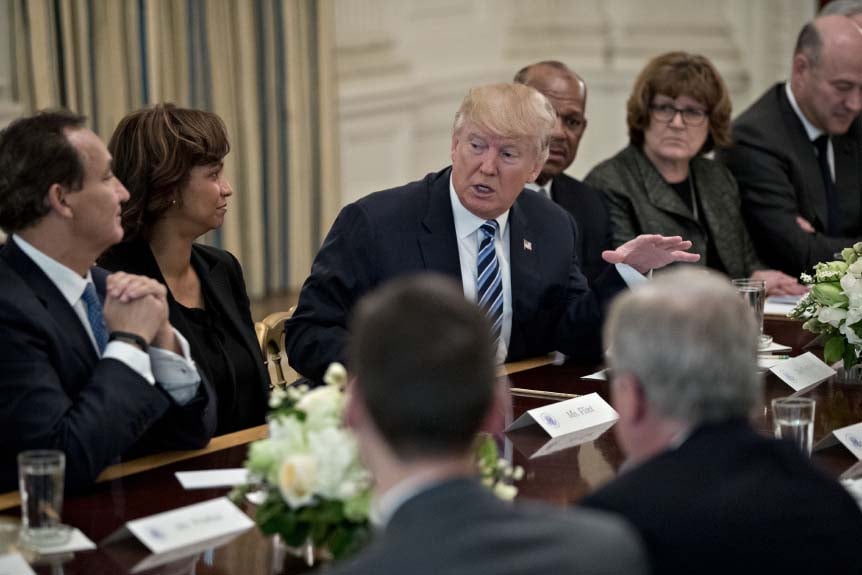 U.S. President Donald Trump, center, addresses Oscar Munoz, chief executive officer of United Continental Holdings Inc., left, during a meeting with airline executives in the Roosevelt Room of the White House in Washington, D.C., U.S., on Thursday, Feb. 9, 2017. Trump assured U.S. airline executives that his administration would help them compete with foreign carriers that he said are subsidized by their governments, and promised infrastructure upgrades, lower regulation and tax relief. (Andrew Harrer/Bloomberg/Getty Images)

With all the other things going on in Washington, from the immigration ban to coziness with the Russians, no one could be blamed if they missed the Executive Order on regulations signed by President Trump at the end of January. Sadly, the President has made an oft-repeated mistake: taking an easy-to-communicate, but largely ineffective approach to regulatory reform. Facing the same political pressures, Canada recently avoided this trap thanks to some behind-the-scenes work by officials.

Of course, I am talking about the President’s so-called “2-for-1” rule that says for any new regulation enacted, two must be repealed. On the face of it, it’s a very attractive approach to halting the growth of regulation in its tracks. Unfortunately, it is based on a very superficial understanding of what regulations are and especially how they work.

To understand why a 2-for-1 approach does not make sense, we first need to understand what regulations are and why we have them. Regulations differ from laws in that they give government officials discretion. Laws, which come only from legislatures, try to state clearly what is lawful and unlawful. When there are instances where discretion is required, say when lawmakers cannot foresee all the circumstances in which a law might apply, the legislature gives the government the power to enact regulations. The bottom line is that through regulations, lawmakers give governments discretion in how to give force to laws.

For an example of what can go wrong with a simplistic 2-for-1 approach, consider the case of an “enabling” regulation. Enabling regulations are used when a law imposes a blanket ban against some kind of activity even when, in certain situations, the banned activity causes no harm. Enabling regulations are used to provide exemptions for activities that are not harmful, but would otherwise be caught by the blanket ban.

Now put yourself in the position of a government regulator. Suppose politicians want you to protect the public from some new threat. Facing the 2-for-1 rule, do you abolish a) regulations that provides some measure of protection to the public, albeit inefficiently or b) enabling regulations that gives firms and individuals freedom to engage in some specific activities but provides no protection to the public? By getting rid of enabling regulations, you can satisfy the 2-for-1 rule and maintain the same level of protection for the public. However, you may end up actually increasing the overall burden of the regulation by prohibiting some harmless activity.

If a 2-for-1 approach is overly simplistic, how can we ensure that regulations are both effective and impose the lightest burden necessary on society? Unfortunately, it requires plain old hard work. Designing regulations is like designing products. Successful product designers are always looking for feedback from customers about what they need and want. Designers of regulations need to do the same thing with their stakeholders.

There is no shortcut to good regulations and that is why broad general approaches like a 2-for-1 rule usually fail. If President Trump is serious about reducing regulatory burden while continuing to protect the public he needs to take a more sophisticated approach. Canada’s recent experience might provide some helpful guidance.

Paul Boothe is Managing Director of the Trillium Network for Advanced Manufacturing and a Fellow of the Institute of Competitiveness and Prosperity.