In Alberta, Canada's youngest province, the proverbial fountain of youth is an oil rig 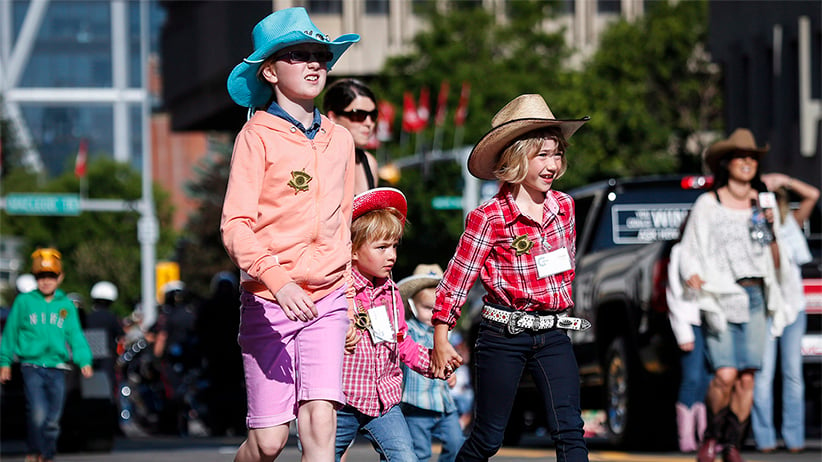 One of the outcomes of the NDP’s big electoral win in Alberta is that the legislature will far more closely reflect the demographic mix of the province it serves than it did before. Whereas the median age of the (literally) old political gang was 54, the new MLAs will collectively shed a whole decade. As the NDP’s youngest MLA, 20-year-old Thomas Dang from Edmonton-South West noted this week,  “Right now, our caucus’s median age is 36, which matches the average age of Albertans. So that’s really exciting. It shows that we can now more accurately represent Alberta.”

Aside from conflating averages with medians—a mistake that’s far from the exclusive domain of the young—Dang was making an important point. Alberta is by far Canada’s youngest province, with a median age of 36, fully 4.4 years below the national level. The booming economy has lured young workers and their families from other parts of the country, while immigrants to the province are younger than those moving to other provinces. Having a younger province, in turn, has resulted in a whole bunch of virtuous traits—more kids, more homebuyers, more people of working age to support the needs of seniors.

But is Alberta about to get (relatively) older again?

The impetus for this question is the same as what’s behind every discussion about the province’s future right now—the price of oil. Because in Alberta the proverbial fountain of youth is an oil rig. As the chart below shows, when oil booms, Alberta gets younger. When oil tanks, it grows longer in the tooth. (The black line shows Alberta’s median age as a share of Canada’s median age up until 2014, while the blue line charts the inflation-adjusted price of oil until earlier this year). 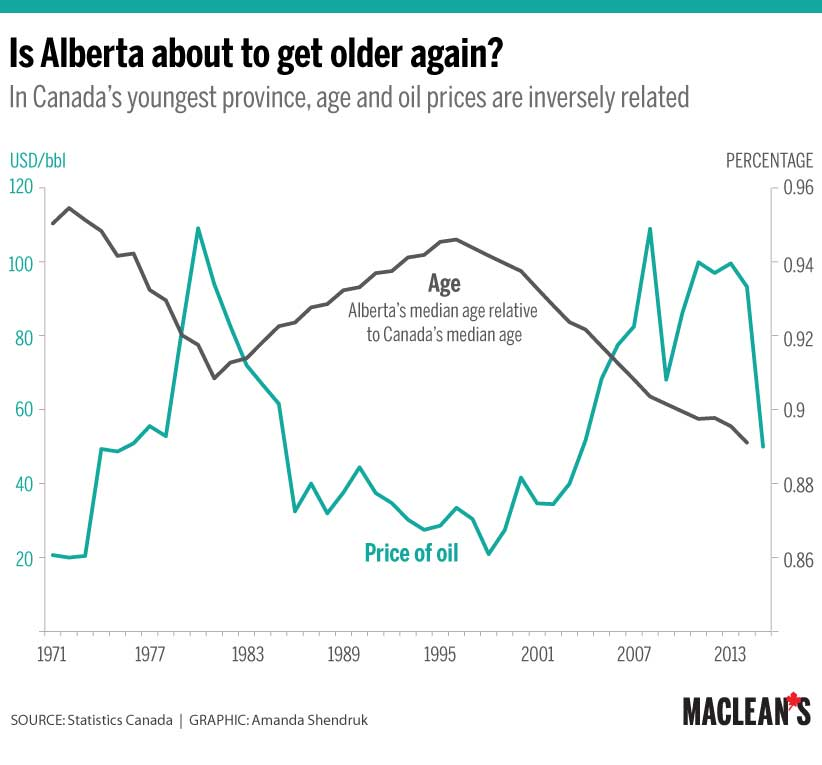 Now it’s important to understand that Alberta’s median age—the point at which half the population is older, and half is younger—has not been declining outright. Quite the opposite: since 1996, its median age has risen from 33.3 years to 36. Alberta’s just been aging slower than Canada overall, which is why the chart shows the province’s median age relative to Canada’s. While it’s true that over the last 40 or so years Alberta’s median age has stayed below Canada’s, the gap between them markedly narrowed during the oil rout of the 1980s and 1990s.

Will the same thing happen again? Will the rate of aging in Alberta begin to catch up with elsewhere in the country? A lot depends on what happens with oil prices this time around. There’s been a remarkable rebound in crude in recent weeks (not shown on the chart) and if that persists then many of the economic headwinds facing the province could dissipate. But if the global glut of oil grows and prices weaken and remain low, Alberta could lose its youthful advantage. For one thing, its mobile young workforce might look elsewhere for work, as happened after the last big oil crash, when Alberta’s annual population growth collapsed from 4.6 per cent in 1981 to zero within four years, reflecting the flood of people moving away.

There are other things that could help Alberta keep its youthful vigour. Alberta’s economy is more diversified than in the 1980s, so theoretically the oil crunch won’t get as bad this time and other industries may be able to absorb all those young workers. And Ontario is hardly the beacon of job opportunity it was during the 1990s, despite the weaker (though less weak of late) loonie.

Even if Alberta does start to close the age gap with Canada again, it’s a safe bet the province will still be the youngest kid on the block, and so all those fresh-faced Alberta MLAs will feel right at home while they’re in office.