Is Canada headed for a pipeline bubble?

Will the TransMountain pipeline expansion still be needed if the world takes significant action on climate change?

The National Energy Board hearings into the Kinder-Morgan TransMountain pipeline expansion will not consider the climate change impact of oil production or oil combustion associated with the pipeline project. In the view of the National Energy Board, consideration of so-called upstream or downstream impacts is outside their jurisdiction and outside the relevant project scope for an individual pipeline. This decision is currently subject to a legal challenge, and the City of Vancouver has requested that the board reconsider its decision.

I’m not a big fan of the board’s decision: considering the impact on the global energy system of an individual piece of transportation infrastructure is complex, but it is done as part of the market analysis for most pipeline applications. Without demanding much additional complex analysis from the proponents, the NEB could request similar analysis of upstream and downstream emissions and environmental impacts with or without the project. The question that would be more complex is how to value local and global environmental impacts within a pipeline hearing. However, as I wrote here, just because it’s complex doesn’t make it wrong. We either need to be clear that we’re assuming that certain impacts don’t occur, that we’re assuming they have zero net benefits, or we need to assess them. Let’s also be clear that if you want to extend the scope to upstream and downstream impacts you can’t only include the costs: you’d have to include the benefits accruing as a result of increased production and consumption as well.

More importantly though, I believe that in their haste to contain the scope of their analysis, the NEB has overlooked a key area of their responsibility—that of the needs assessment for the pipeline—in the context of national and global action on greenhouse gases.

So far as I can tell, in both the assessment of Enbridge Northern Gateway or the TransMountain Pipeline Expansion, the NEB did not request or note the absence of analysis of a case in which Canada meets its national climate change goals or in which global climate change policies become more significantly more stringent than they are today.

The National Energy Board Act states that a pipeline may be permitted if “the board is satisfied that the line is and will be required by the present and future public convenience and necessity.” In other words, it must consider whether the line will be used while not causing other lines to become unused, and the board must be assured that it will not unnecessarily endanger people or property. When it comes to the question of demand for the pipeline, there’s an important climate change risk, which the NEB appears to be ignoring. Will the pipeline still be needed if Canada acts to meet its domestic commitments on climate change or if the world takes significant action on climate change, with or without Canadian participation?

We do have a model to consider, and it shows why this discussion is important. As part of its annual World Energy Outlook, the IEA has been for several years evaluating the impacts of global policies designed to stabilize carbon dioxide equivalent atmospheric concentrations at 450ppm. This 450ppm scenario is designed to provide a reasonable (50/50) degree of certainty that climate changes would be limited to the equivalent of two degrees Celsius. 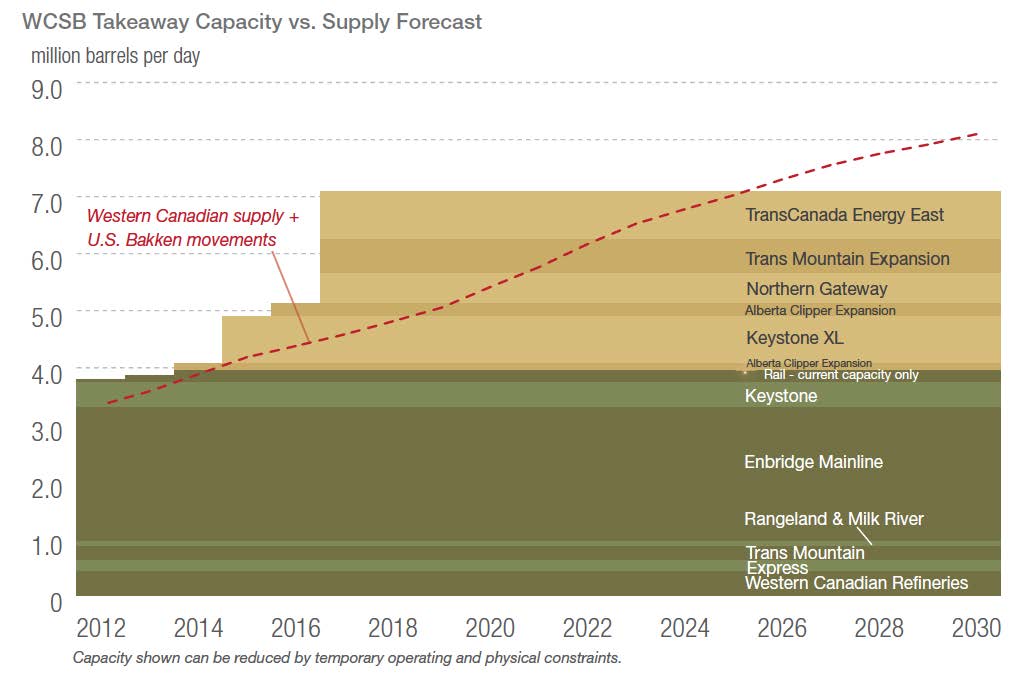 The second, related issue is the impact of potential Canadian GHG policy on demand for pipeline capacity. Canada committed at Copenhagen to a reduction, by 2020, of national emissions to 17 per cent below 2005 levels. The minister of the environment has repeatedly reiterated the government’s commitment to that target. Government of Canada analysis projects that, with no further policies implemented, we will miss our target by approximately 125Mt, with oil sands emissions growing from approximately 50Mt today to around 100Mt in 2020. That the National Energy Board would not consider the demand for pipeline capacity in a scenario in which Canada meets its international commitments is unbelievable. Let me say that again: our national energy regulator is evaluating projects under a scenario which our own minister of the environment says will not occur.

The oil sands industry has been clear that significant reductions in emissions would only come at the expense of competitiveness, which we must conclude would imply that some forecast production would not occur. The oil industry has, at least in the cases of Exxon and Shell, made it clear that their development decisions do not assume action on climate change consistent with meeting either Canada’s emissions targets or with global action sufficient to limit climate change to the two degrees Celsius threshold agreed to at Copenhagen.