Is it time to panic in the oil sands?

If the current pricing trends continue, at least one of the proposed oil sands pipeline projects would no longer be needed

Since early June, the price of Western Canadian Select, the benchmark price for heavy crude in western Canada, has dropped from $94 per barrel to barely over $55 per barrel on Friday. The decline in Canadian heavy crude prices has largely mirrored the decline in U.S. benchmark West Texas Intermediate, which has dropped from US$107 in mid-June to just over US$66 Friday, and global benchmark Brent crude, which has declined from $115 per barrel to barely over $70 per barrel Friday. I wrote in early November that the effects of the global slide in crude prices had been partially mitigated for oil sands producers by three factors: decreasing condensate prices, a sliding Canadian dollar, and narrowing differentials between heavy and light crude oil. For the most part, these factors have not done much to buffer the losses for oil sands producers over the last month—the differential between WTI and WCS has come back to $20 per barrel, having been much lower through October, the Canadian dollar lost ground this week, but is only today back to the lows seen in early November when crude was worth significantly more than it is today, and while heavy crude is down 25 per cent since Halloween, the value of condensates used to dilute bitumen for transport have lost much less value. Put all these factors together, and a barrel of bitumen was worth almost 40 per cent less on Friday than it would have been worth on Halloween and almost 50 per cent less than it would have been worth in mid-June.  This is not good news if you’re producing bitumen in the oil sands, but just how bad is it? 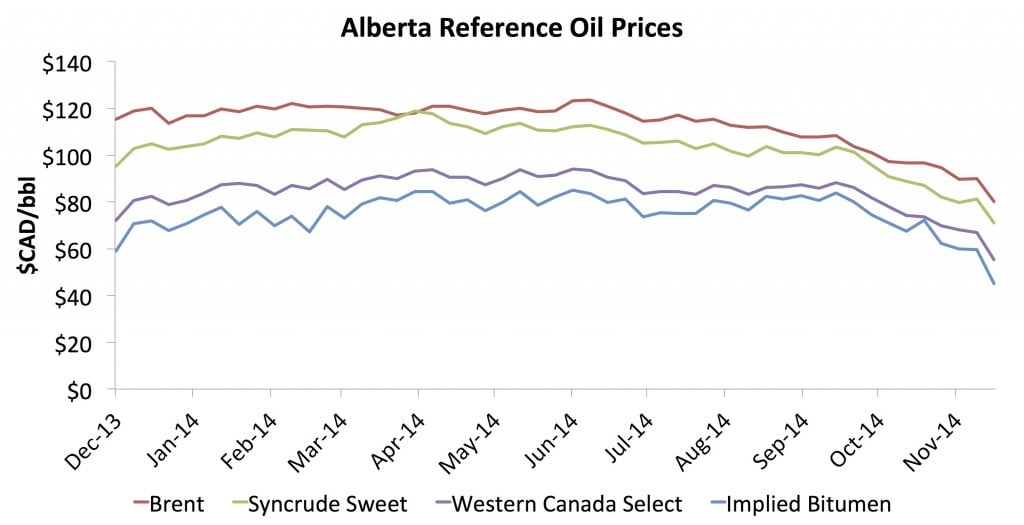 When oil prices drop as they have, there are three immediate impacts: oil sands revenues drop, which implies lower royalties and lower taxes. The longer-term impacts, largely yet to be felt, will occur if projects start to be delayed or cancelled as a result of the drop in prices. It’s unlikely that projects currently under construction will be cancelled, especially if they have already seen significant capital investment, because the return on investing the remainder required is still likely to be sufficient to keep the project on track. However, as you’ll see below, if these trends continue, there’s reason to expect that new investment decisions on the projects that were expected to lead to further production growth later this decade may be delayed, and that could have a significant impact on pipeline discussions as well as on activity in support industries for oil sands.

To give you a sense of how much the financial outlook for oil sands projects has changed, let’s consider two projects—a new mine similar to Suncor’s Fort Hills project, and a new in situ development similar to the Cenovus Narrows Lake project—and see how the changes in prices have altered potential returns, royalties and taxes. For the comparison, I’ll use prices from today compared to assumptions used last Oct. 31 when Suncor announced the decision to proceed with the Fort Hills project. Those assumptions were as follows:

If you compare the two project types under each of these two sets of assumptions, shown in the table below, you can see how much the changes in prices observed over the past couple of months could impact new (and existing) oil sands projects.

There are three things you should notice from this table. First, the rates of return should jump out at you. The mine, which I’d always calculated below Suncor’s published figures of 13 per cent, drops significantly to less than six per cent based on my calculations—a rate at which no oil company would consider building a new mine. Even the in situ project, which would have been projected to earn a robust 18 per cent return on invested capital after taxes using Suncor’s pricing assumptions from last year would only expect 10.5 per cent using today’s prices—a rate of return that would be marginal at best. The second thing you should remark upon is what happens to the government shares of revenues from these projects—while per-barrel revenues drop by 27 per cent, expected royalty and tax revenues would drop by over 50 per cent and profits drop by almost 60 per cent.  Finally, though, notice that these projects remain profitable, both in operating terms and when including the fixed costs of building capital. This last point is why you’re unlikely to see existing facilities, or even facilities for which a substantial amount of construction has been completed, being shut down—it’s likely to be better to earn six per cent on $15 billion than to lose $5 billion, for example.

So, how will these changes in price affect oil sands production, and should they change the discussion around pipelines in Canada? I think it’s too soon to tell. I’ve been bearish on production forecasts for a long time, arguing that cost inflation in the oil sands meant that it was unlikely even before the price drop that near- or long-term production forecasts published by CAPP and others would be met. Simply put, over the last decade, we’ve seen a perfect storm for oil sands development, with oil prices well above forecast levels and natural gas prices at or below expected costs, and forecast production hasn’t materialized—in 2006, CAPP forecast oil sands production to reach four million barrels per day by 2020, while their most recent forecast calls for just over three million. With the recent price drop, combined with the fact that projects in construction and currently operating are likely to continue, and you’ve got ongoing concerns with regard to cost escalation combined with much lower expected revenues. As such, it seems unlikely to me that even the lower levels forecast by CAPP this year for 2020 are likely to be met. Any decisions today are not likely to affect production forecasts in the near term, but in the timeframe relevant to pipeline projects currently before the National Energy Board, the potential is certainly there. As I’ve said above, to date we’ve seen no sign of significant pull-back in capital expenditures, but if the current pricing trends continue, and appear to be longer-lived, expect to see a much lower long-term forecast for oil sands, not to mention light oil from the U.S. Bakken, the next time around. Such a change, as you can see in the figure below, could mean that at least one of the proposed pipeline projects would no longer be needed within the forecast horizon. 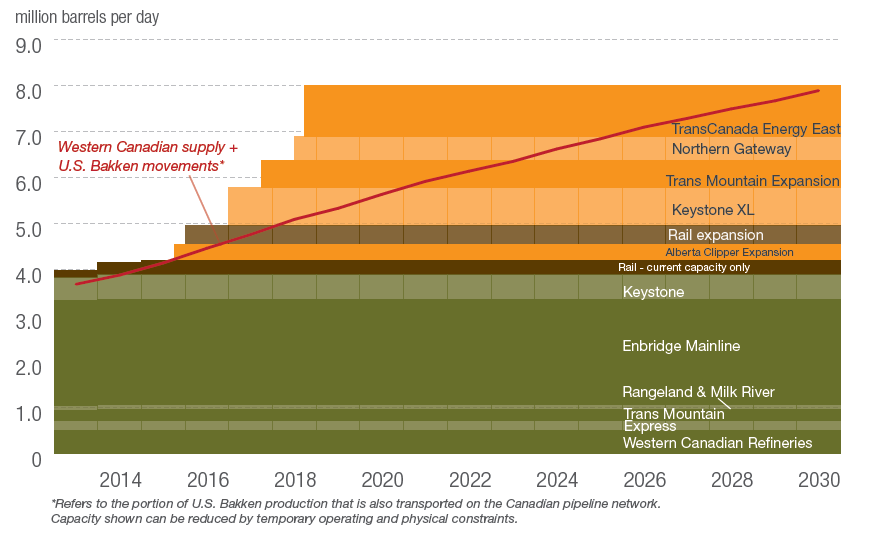