Is the Conservative tax plan principled or just vote-buying?

Each element of the tax package has roots in tax principles, but some parts fall short

The Conservative government announced its latest tax policy volley last Thursday in Vaughan, Ont. Over the next five years, the value of the newly promised tax cuts is estimated at $26.8 billion, so this package puts a large dent into any future surpluses. Below, I first outline the details of the tax package, then talk about how much we should rely on the typical “who gets what” analysis. Finally, I go through the three elements of the package and see how well each stands up against tax principles.

The first element of the package adds $60 per month to the Universal Child Care Benefit (UCCB) for each child aged 0 to 17, which takes the taxable UCCB to a total of $160 monthly for children aged 0 to five and $60 for those aged six to 17. The UCCB expansion was twinned with repeal of the non-refundable Child Tax Credit, which had an annual value of $338 per child—but only paid out to those who owed income taxes. The second major element is an update of the Child Care Expenses Deduction by $1,000—the first time the deduction’s value has moved since 1998. The final new element in the package is an attempt to meet the 2011 election campaign promise to allow income-splitting between parents of children. The Family Tax Cut announced on Thursday fell short of that 2011 promise by limiting the dollar value of the provision to $2,000. There was also a fourth element to Thursday’s tax package, but it was just a re-announcement of an expansion to the Children’s Fitness Tax Credit, which I analyzed a few weeks ago.

The package received positive reviews for its agile political targeting from political columnists John Geddes,  John Ivison, and Chantal Hébert. The dollars are clearly aimed at middle-class pockets with more precision than the original 2011 income-splitting proposal, so I have no grounds to criticize the always-astute political analysis of these commentators. However, I insist we inject something more into the debate beyond the “who gets what” style of tax policy analysis. We have other objectives, principles, and targets that require attention, as well.

It’s easy to dismiss a professor prattling on about principles when there are elections to be won. It’s certainly true that Prime Minister Stephen Harper’s Conservatives began winning elections only when they started ignoring tax policy experts with the 2006 GST cut. But I think there are dangers if our tax system devolves into nothing more than a delivery system for spoils to the preferred clients of the victorious party. First, tax policy as vote-buying clutters the tax code, as each election brings shiny new policies to attract votes. Like new flyers on an announcement board stapled and glued on top of old ones, the result can be an incoherent mess. Second, putting short-run politics ahead of principle saps stability from the system. Flitting back and forth as parties reward their clients can lead to volatility and uncertainty in the tax regime. Grounding tax policy in principle avoids these costs.

So, let’s have a look at the elements of the new tax package with some focus on the principles behind each of the three tax changes.

There are two principles at stake in the tax treatment of children. First, we allow everyone some amount of income to be earned tax-free to recognize the basic costs of living. For adults, we do this with the $11,138 Basic Personal Amount, which is the same value for all taxpayers. Children, as human beings, should also receive some degree of tax recognition. That could take various forms, but the principle is clear: All children deserve tax recognition.

The second principle is to help those in greatest need. Families end up in a low-income situation for a variety of reasons. Maybe a poorly timed illness robbed the parents of opportunity to work. Maybe the parents were ill-prepared for life because their own parents failed to instill adequate tools to cope. Or maybe the parents simply made bad choices in the past. All these sources of low income have one thing in common: It’s not the kid’s fault. Children without the basic necessities struggle with health, school and achievement. Investing in children living with inadequate resources is efficient, so providing targeted resources to families with low income is a principled choice.

The switch from the Child Tax Credit to the UCCB meets both these principles. The Child Tax Credit paid nothing to families who owed no income taxes, while the UCCB pays out to even the lowest-income children. Moreover, because the UCCB is taxable, the net benefit is greatest at lower incomes. In this way, the expanded UCCB maintains an element of universality, while delivering more benefits to lowest incomes. Myself, I would go further by folding the UCCB in with the existing Canada Child Tax Benefit to create one seamless benefit. But this expansion of the UCCB by cancelling the Child Tax Credit is a step forward.

The second element of the tax package is a move to restore part of the value of the Child Care Expenses Deduction. The principle invoked here is to tax people on what they take home from their work, after accounting for expenses necessary to earn their income. We tax businesses on their profit (revenue less costs), not on the revenue alone. We should tax individuals on the same basis by accounting for costs such as child care. The new deduction amounts will be $8,000 for kids up to age six and $5,000 for those aged seven to 16. This part of the package goes some way to restore the value lost to inflation since the child care deduction was last updated in 1998, but $8,000 still falls short of the full cost of child care for many families.

Income-splitting with the Family Tax Cut

The most controversial component of the package is the Family Tax Cut, which implements a limited form of income-splitting. When spouses have incomes that put them in different tax brackets, a family can save money by shifting some income out of the higher tax bracket and into the lower tax bracket. The gain comes from the spread between the tax rates in the two tax brackets. If the spouses have the same income (or if there is no spouse), income-splitting makes no difference. I analyzed the previous version of the Conservative income-splitting promise on Econowatch last year.

The new Family Tax Cut calculates the benefit of splitting up to $50,000 between spouses, then allows a credit capped at $2,000 that reflects the tax savings from splitting income. This sounds complicated—and it is. Jennifer Robson dug into these complications here on Econowatch last week. On a more positive note, the warning from the Mowat Institute about a negative feedback from income-splitting onto provincial revenues is avoided by this credit structure.

The principle that underlies income-splitting is that similar people should receive similar treatment. Tax policy folks call this “horizontal equity.” A family with two $50,000 earners has the same combined income as a family with one $100,000 earner and a stay-at-home spouse with zero income. At a simplistic level, the principle of horizontal equity seems to imply that these families should face the same taxes. However, after some reflection, the similarity of these two families is less clear.

If the horizontal equity argument is not watertight, the door swings open to viewing the Family Tax Cut as just another boutique tax credit transferring money to a certain clientele. What is this clientele? In the chart, I graph the income of the primary and secondary earner along the bottom. The height of the bar shows the tax savings, capped at $2,000. These simulations are for the 2012 tax system, but there haven’t been enough differences in the tax system between 2012 and 2014 to matter much. 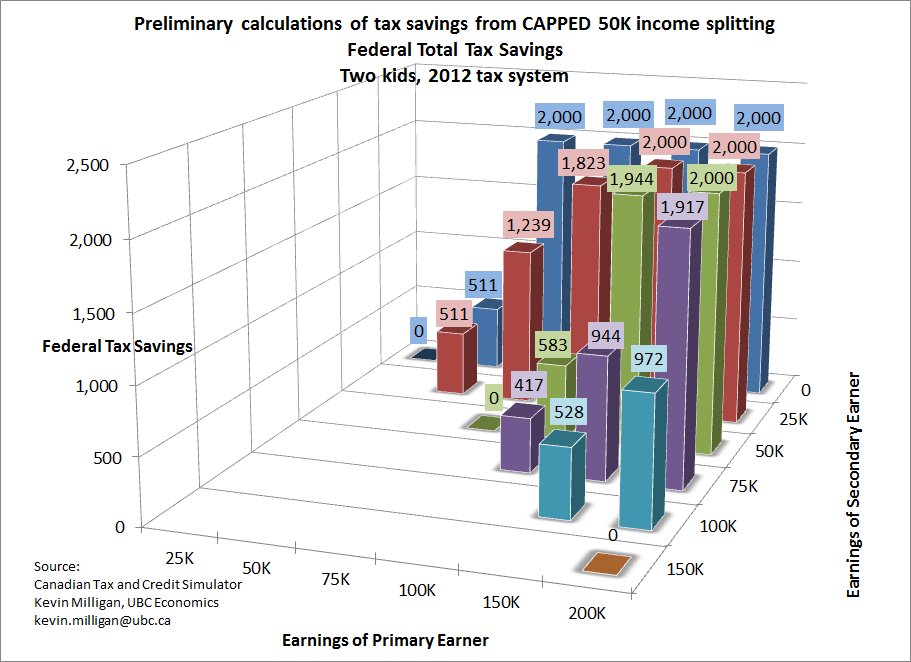 Looking at the chart, all of the combinations that yield the maximum $2,000 credit have the primary earner making $75,000 or more. A mix of $75,000 and $50,000 would get nothing, but if the lower earner dropped down to $25,000, the credit would rise to $1,239. The predominant impression I take from the chart is that most of the benefits go to those who are well above median income levels.

As noted by Maclean’s colleague Colby Cosh, it rings somehow odd to hear conservatives speaking the language of equity, fairness and economic justice that more typically comes from progressives. There are many sources of injustice in our society. One injustice is this dispute among high income families with different spousal work arrangements. Presented with impending budget surpluses, should a top priority be to cut the taxes of some high income families so they can finally achieve long-sought tax justice compared to their high income neighbours? Where does that rank relative to other injustices in our society? I have no doubt that the horizontal justice defenders are sincere in their beliefs when they say, “Actually, it’s about fairness in taxation.” I also have no doubt that it is fair to question their priorities on this part of the tax package.