Why the federal budget should focus on gender equality

After decades of budgets that favoured men, the Trudeau government has said budget 2017 will reflect gender-based analysis. It's what Canada's economy needs.

Infrastructure and innovation have got a headlock on analysis of what will be featured in the next federal budget. But I bet you missed it when, last fall, Finance Minister Bill Morneau announced that Budget 2017 and all future budgets would be subject to gender-based analysis. The reason was to “ensure that the government continues to deliver real and meaningful change for all Canadians.”

Yesterday we learned the next federal budget will be tabled on March 22. So will it deliver “real and meaningful change for all Canadians”? And what is gender-based analysis, anyway?

Budgets are a feminist issue

Gender-based analysis examines how different tax and spending measures affect men and women differently. The goal is to identify and reduce inequalities in how men and women are treated by public policy.

It’s often taken as given that budgets are gender neutral. They’re not.

For example, over past two decades Canadian governments have made budget choices that prioritized tax cuts, resulting in hundreds of billions of dollars in foregone revenues.

That has mostly benefited Canadian men. Income tax cuts don’t reach 38 per cent of women in Canada (and 27 per cent of men), because they don’t make enough money to be taxable. On the other hand, a measure like pension income-splitting, introduced in 2007 by the Harper government, cost over $1 billion in 2012, of which 89 per cent was claimed by men.

The flip side of tax cuts is that there is less money available to add or improve public services. Women rely more on public services than men (such as health care, affordable housing, public transit). So it’s a double whammy for women when governments focus on tax cuts as a policy priority.

Can women break the spell of ‘Slowth’?

While tax cuts remain an evergreen political offering, things seem to be changing. The era of slowth (slow growth) is nudging financial thought leaders towards a better understanding of the economic value that can be unlocked when gender inequalities are reduced.

In the developing world it’s about access to reproductive and maternal healthcare, or schooling for girls, or something as fundamental as access to clean water, which can free up time. That lets women lighten the load in other ways, improve economies, and make things better for everyone.  Happier women make for happier men, the world ’round!

In Canada, Trudeau’s Liberals are also eyeing untapped potential, hoping an increase in women’s participation in the paid labour force will help grow the economy too. An RBC study has estimated GDP could grow by 21 per cent if men and women had equal outcomes in the job market. Even a fraction of that growth would be welcome these days.

A higher proportion of women are in the labour force in Canada than in the U.S.—one reason why inequality isn’t as extreme here—but women’s participation rates have plateaued recently, and the feds want to boost it again. Enter gender budget analysis. 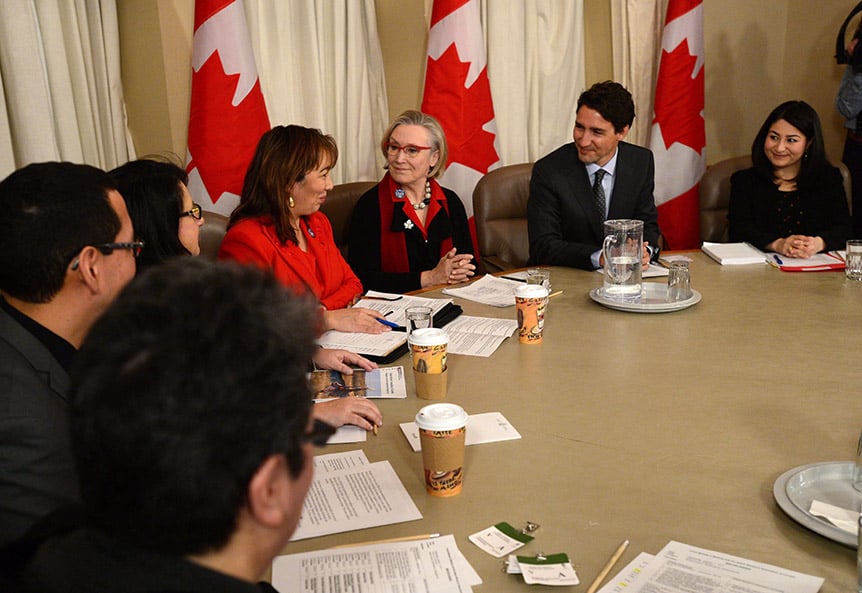 Getting from here to there

What kinds of budget measures could achieve the goals of greater gender equity in the labour market?

The tried and true policies are access to affordable, high quality post-secondary education and childcare. Expanding access to both are usually seen as very expensive—the combined measures would require about a $5 billion initial outlay, annually, according to the Alternative Federal Budget from the Canadian Centre for Policy Alternatives—but that fails to take into account how, ultimately, they more than pay for themselves in the form of higher tax revenues. In the case of childcare, this payback is immediate, i.e. within the same fiscal year, according to research from Quebec. (In 2008, each $100 of subsidy for child care paid out by the Quebec government resulted in an additional $104 in tax revenue for the province and a windfall of $43 for the federal government.)

Other budget measures could pay off by preventing costs, both financial and human. Canadians spend more than $7 billion a year coping with the terrible price of violence against women. On a single day, as many as 302 women and 221 children can be turned away from shelters in Canada because they were full. The federal government announced $90 million over two years in last year’s budget to renovate or create spaces, which is good news; but federal support for housing has lost hundreds of millions of dollars over the past decade. Well-targeted programs for shelters and supports could forestall huge costs and misery, and could be part of a sorely needed renewal of a national affordable housing strategy (pricetag: an additional $1.5 billion a year).

Other, less costly measures could set the tone from the top. For example, leadership in commitment to pay equity (costing an estimated $10 million for the federal government) might encourage other employers to adopt similar practices.

Gender budget analysis simply asks: do your budgetary initiatives generate more equality or less? For the Trudeau Liberals, the answer should be a resounding “more.” This is, after all, a self-proclaimed feminist government. But it’s not the only one trying this out.

Whether you think of them as feminist or not, Korea, Australia, Finland, Japan, and Austria have all, at various times, developed and advanced gender budget approaches. I’m leaving out the names of a surprising number of countries here. Gender budgeting means different things in different places at different times. What is constant: budgetary policies are prey to political shifts in sentiment. It’s unclear if gender-equality-seeking governments are a new fashion, or a new exigency.

Sweden is perhaps, not surprisingly, the longest-reigning Queen of Gender Equality, and has identified itself as the world’s first feminist government. It sees gender inequality as unacceptable, and to prove its point it has mainstreamed “gender-responsive” budget processes, and results to match.

Canada has chosen to also put itself in the spotlight, and on the spot too. We’ll host a national conference in 2018 on best practices in gender budget analysis … as we figure out ourselves how best to do it. We’ll see the first steps towards this approach in an annex to the March 22 budget. The OECD will be showcasing Prime Minister Trudeau who will open their conference on Business, Finance and Gender on International Women’s Day, March 8. The Prime Minister is on a bit of a roll with his focus on women entrepreneurs, but we all know gender equality goes far beyond the C-suite (or the start-up).

It has transformed women’s lives and whole communities where it’s been adopted in parts of India, Korea, and some African nations. It shines a light on how everyone wins when fiscal policies support women and girls’ ability to reach their potential. A bigger economy is just one benefit; safer, smarter communities is another.

Living within our means

So why aren’t we all rushing towards Door #1? The stock answer is “we can’t afford it.” Let me show you a picture to disabuse you of this notion. 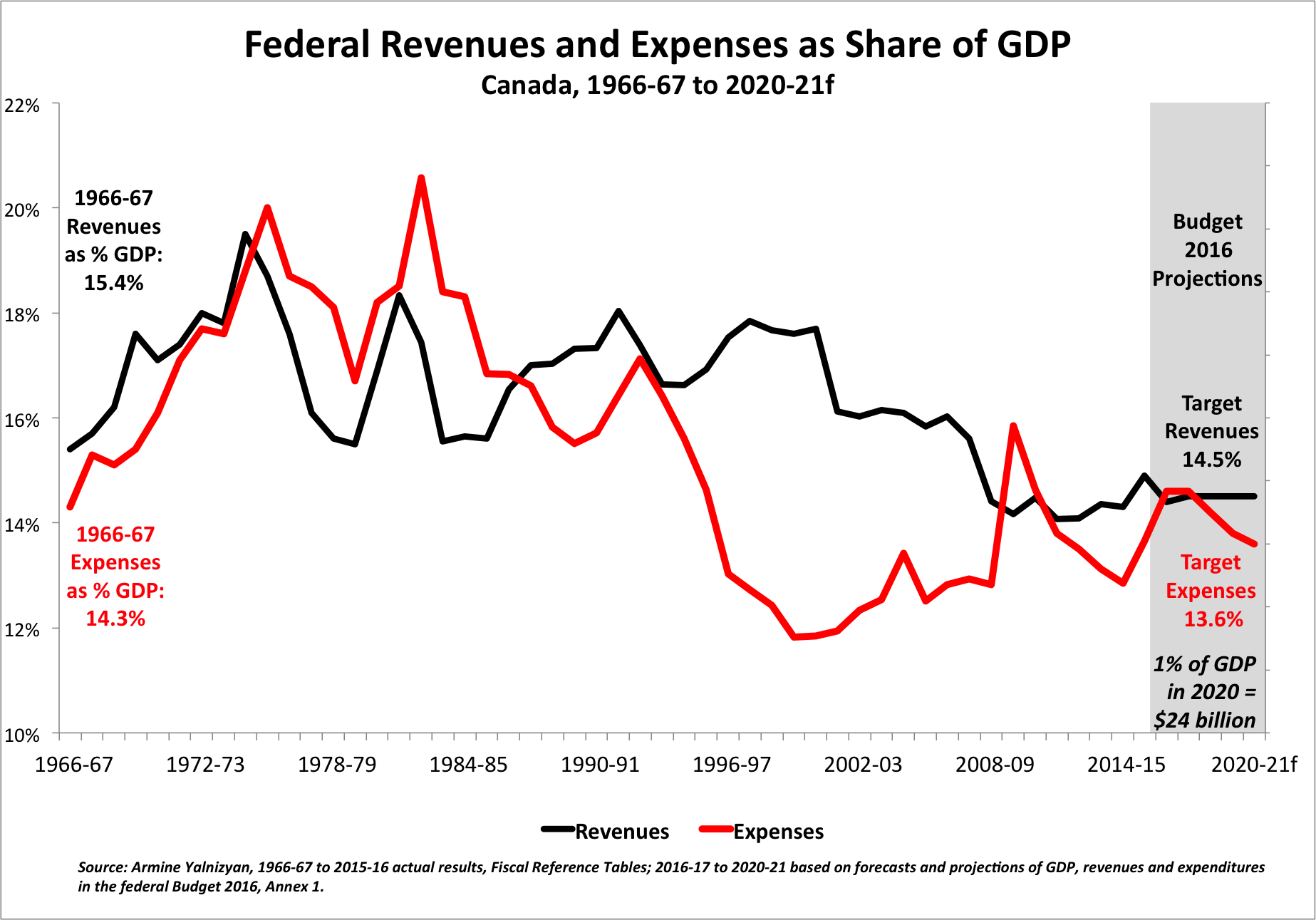 You can see the issue. Whether Liberal or Conservative, the objective of federal fiscal policy has been, for decades, to reduce spending levels and maintain revenue levels in order to pay down the debt. Debt reduction is the anchor concept of choice for federal fiscal policy.

Based on last year’s budget, the objective is to target both revenues and expenditures as a share of GDP to settle in at roughly 1 percentage point lower than they were in 1966-67, the year Canada introduced medicare and welfare, and prior to the expansion of unemployment insurance benefits and our system of colleges and universities. It would not be so hard for us to lean in a little more, no?

By 2020 you will also note there is a projected gap of almost 1 per cent of GDP between what we collect in revenues and what we spend. By 2020, 1 per cent of GDP is projected to be worth about $24 billion—an amount that could fund the federal share of a national child care program, an affordable housing strategy, a post-secondary granting strategy, pharmacare, community infrastructure (including transit and neighbourhood revitalization) and still leave $4 billion more for any other initiatives, according to the costing in the 2016 Alternative Federal Budget.

These measures don’t just benefit women, but they benefit women the most and, crucially, start to close a range of inequalities among all Canadians. And—bonus points—all these measures would improve purchasing power and opportunities, generating new growth.

I am reminded of that old feminist saying: it’s not how big it is, it’s how you use it. The budget I mean. We have the money. But our governments have consistently placed priority on tax cuts or lowering the debt (just as soon as they eliminate the deficit). Both strategies seem pretty 20th century right now.

If we still wanted to keep paying down the deficit and the debt at a faster rate than $4 billion or so a year, we could raise more revenues. That’s not as hard as you’d think if the government gets serious about broadening the tax base by closing loopholes, reducing tax expenditures, and enforcing rules to chase down tax avoidance.

As the 10th largest economy in the world, we can pretty much achieve anything we want. Being governed by a feminist cabinet should make that an inspired and inspiring starting point.

On March 22, Canada’s first feminist government will likely opt for process over substance, citing lack of resources as the excuse. But what matters most is that the process genuinely kick-starts a new fiscal sensibility, one worthy of an inescapable 21st century reality: men and women are equals.

Armine Yalnizyan is an economist and media commentator based in Toronto. You can follow her at on twitter: @ArmineYalnizyan.