It's time to consider a local minimum wage

Why should a fast food worker in downtown Toronto make the same as one in Northern Ontario? 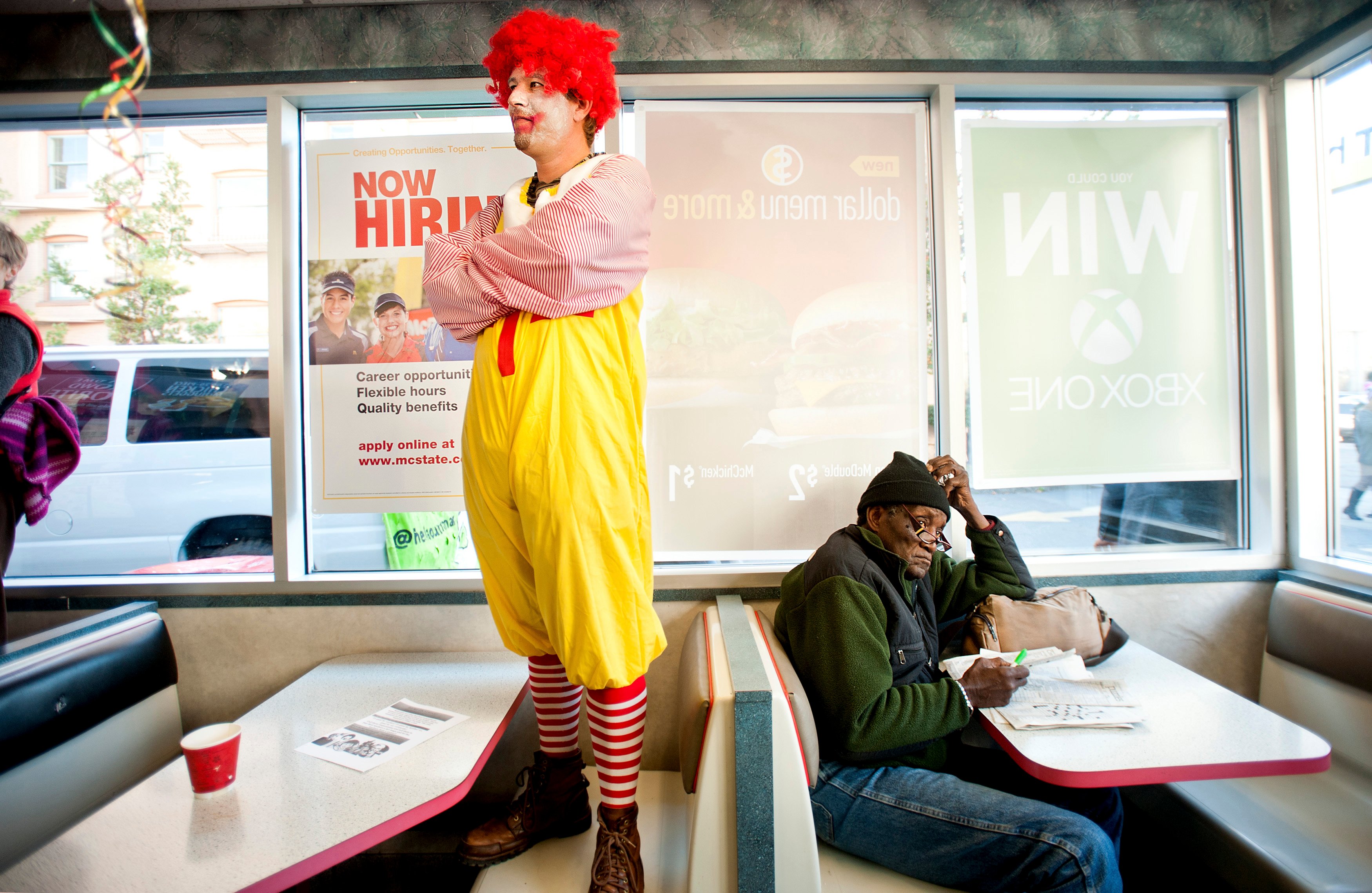 There’s a pretty good chance that the next federal election will have something to do with the state of the middle class. To that end, Opposition leader Thomas Mulcair has revived the idea of a federal minimum wage as a way to tackle poverty and income inequality.

Anti-poverty activists have been pushing for Ottawa to reinstate a federal minimum wage since it was scrapped in 1996, arguing that it acts as a guidepost to the provinces when setting their own minimum wage, which now range from $10-$11 an hour across the country. Others say that any minimum wage legislation is guaranteed to be a job-killer.

But the argument over a federal — or even a provincial — minimum wage ignores the fact that economies are local, with huge differences between communities in the same province when it comes to both the types of jobs and salaries available and cost of living.

For instance, the average price of a house in Toronto hit $546,000 this month. A typical monthly payment on a 25-year mortgage at 3.5 per cent interest is north of $2,500. Meanwhile, you can buy what looks like a pretty nice house in Opasatika, Ontario, north of Timmins, for less than $50,000. That works out to a typical monthly payment of little more than $200. Yet businesses in both communities are both required to pay their workers a minimum of $11 an hour (the equivalent of $21,450 a year for a full-time job.)

The Canadian Centre for Policy Alternatives, among others, has argued that an appropriate minimum wage is one that’s between 50-60 per cent of the average hourly wage in that area. By that measure, the provincial minimum wage is actually too low for many Canadian cities. But it’s also too high for others. 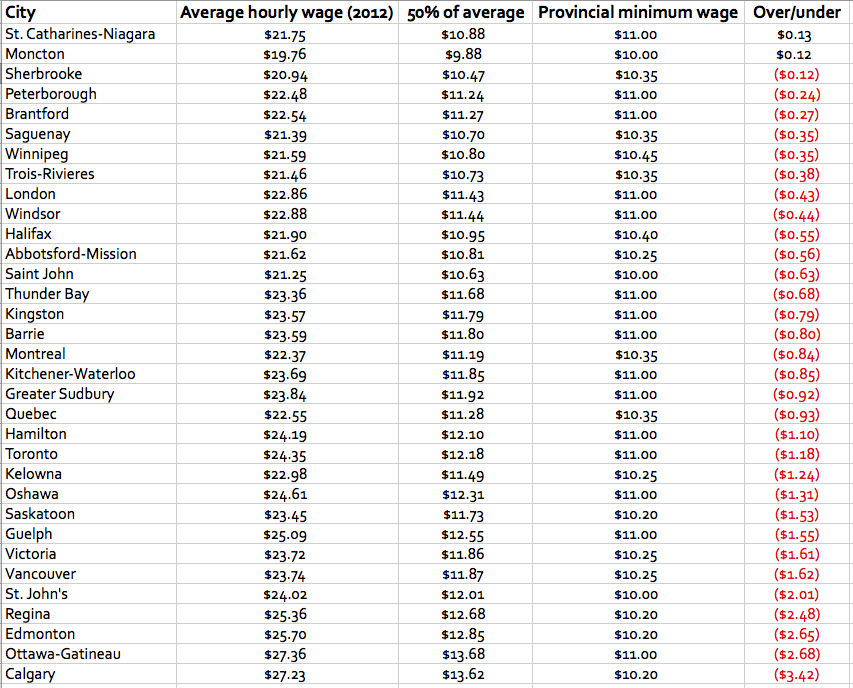 Based on the 50 per cent threshold , the legislated minimum wage is slightly more generous than necessary in cities like Moncton, N.B. and St. Catharines, Ont. In those cases, the high provincial minimum wage might actually be harming the local economy by forcing companies to pay higher wages than is actually necessary — driving up prices on their products and services beyond the ability of other locals to pay. On the other hand, the minimum wage is too low for most cities, particularly places like Calgary and Ottawa. That’s likely why so few people actually earn the minimum wage in Alberta (less than two per cent): it’s simply too low for businesses to compete for workers.

But if the idea behind a legal minimum wage is to ensure a basic standard of living for everyone then basing minimum wage off of the average wages seems misguided. After all, cities like Vancouver and Toronto are enormously expensive, especially for anyone trying to buy real estate. But they also tend to attract a lot of prospective workers and have large numbers of service jobs. So they tend to pay lower wages on average than a resource-driven city like Calgary, even though Calgary actually has a lower cost of living.

Using the government’s own estimates, a couple with no children who owns a house and takes transit to work would have to earn a combined minimum of $64,613 to just barely scrape by living in Vancouver. That works out to $16.57 an hour for each person, provided they work full-time hours year-round. Even then, that couple would spend their entire paycheque on basic living expenses.

Meanwhile, in Kelowna that same couple could survive on a combined income of $42,750 a year, or roughly $10.36 an hour. (Again they would have nothing left after paying for their basic expenses.) That’s a wage difference of more than $6 an hour. Interestingly, for Kelowna residents, that’s not far off from the provincial minimum wage of $10.25. Kelowna is hardly the cheapest city in B.C., yet its “survival wage” works out to about 45 per cent of average local hourly wage. For Vancouver, however, it would need to be close to 70 per cent.

It’s likely that in big cities, the high cost of living might require a minimum wage that’s even higher than the suggested 50-60 per cent threshold. The fact that it will drive up prices on those goods and services supported by low-wage labour might be a fair compromise in cities where everything else is already pretty expensive. After all, someone still needs to sling the burgers and fries at all the fast food joints in downtown Toronto and Vancouver.

The movement for a local minimum wage is gaining steam south of the border, where more than 140 municipalities have passed their own living wage laws. But so far, New Westminster B.C. has been the only Canadian community to sets it own local minimum wage–albeit one that only applies to companies who do work for the municipality. Even so, its minimum wage for city contractors is an astounding $20.10 an hour, or nearly $40,000 a year (less if the employers also provide benefits.) As high as that sounds, it might not be an outrageous minimum wage for the Lower Mainland. But it could be economically devastating—not to mention unnecessary—if the province tried to expand that to smaller communities in the interior.

The entire debate over a living wage is tempered by the fact that relatively few Canadians actually earn the minimum wage. Nationally, it’s about seven per cent, though that ranges from less than two per cent in Alberta to nine per cent in Ontario. But if anti-poverty groups or Thomas Mulcair really want to make a difference in the working lives of ordinary Canadians, they might be better off changing their focus from a national or provincial minimum wage to a local one.