Justin Trudeau is getting cocky about the economy. Watch out.

Strong Jobs growth and markets may breed complacency, which creates the conditions for the dumb risks that eventually cause a crisis 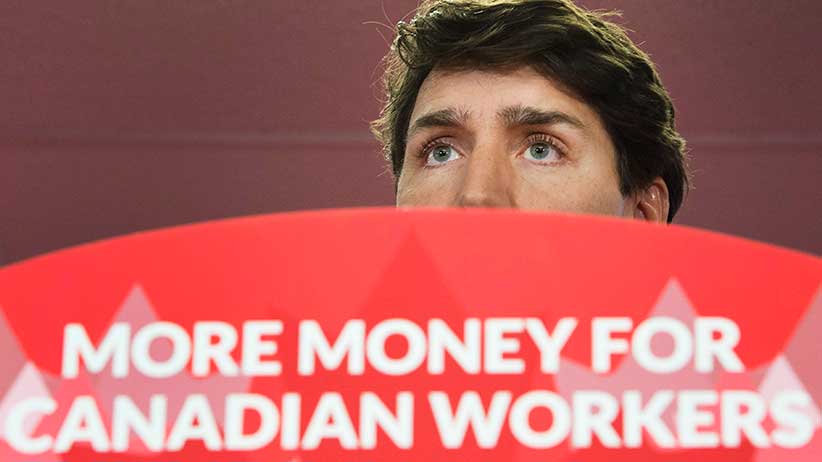 Justin Trudeau still knows how to land a jab. “With Mr. Harper, we had the lowest growth rate since R.B. Bennett,” the current prime minister said last month of the man he dispatched in 2015.

Low blow. For all you kids out there, Bennett was the Conservative prime minister who did the Liberals a favour by winning the 1930 election, relieving William Lyon Mackenzie King of the responsibility of dealing with the Great Depression. It was an impossible situation, but Bennett generally is thought to have handled the calamity poorly. If you are Stephen Harper, who considered economic oversight his forte, it’s not a comparison you would like.

Trudeau is starting to get a little cocky about the economy. “Record numbers” of jobs are being created, he said that same day in October, which also happened to be the one when he capitulated…sorry, kept his campaign promise…to the Canadian Federation of Independent Business, lowering the income tax paid by smaller companies. “We are seeing that our focus on the middle class, by putting more money in the pockets of hard working families, and giving less advantages to the wealthiest, is growing the economy,” Trudeau said, as he also attempted to distract the media horde from his finance minister’s loose interpretation of what constitutes a conflict of interest. Plenty of economists were skeptical of the Liberal program, which involved consciously plunging the country into deficit. The prime minister had a special message for the skeptics: “Guess what? That plan is working.”

How well is that plan working? Pretty well, actually. Statistics Canada reported Nov. 3 that the number of Canadians employed in October was 308,000 greater than the same month a year earlier. Results of that kind have Trudeau on track to oversee the most impressive run of economic growth of any prime minister since, um: Mr. Harper. 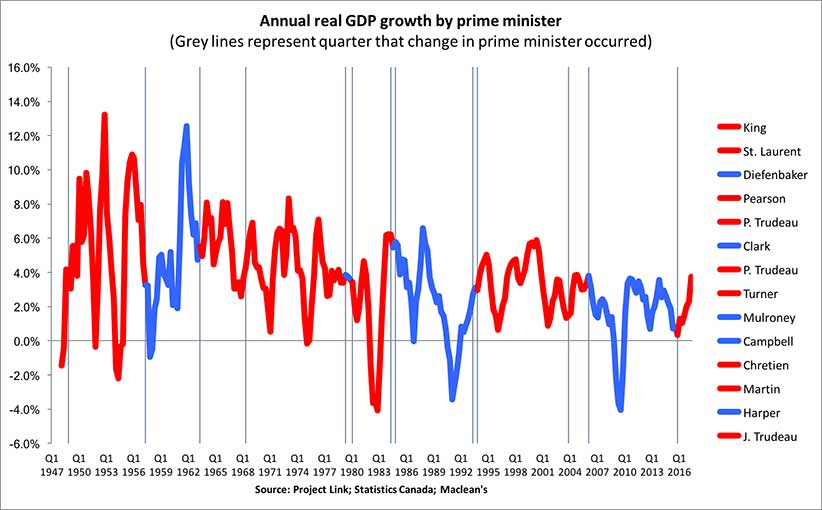 It was only this past summer that Trudeau’s PMO was reluctant to brag about a boast-worthy run of economic indicators. The good news culminated this summer with a StatsCan report that showed gross domestic product expanded at an annual rate of 4.5 per cent in the second quarter. Developed, aging, and unproductive economies such as Canada aren’t supposed to expand that fast. Someone in Ottawa appears to have decided the government should get some credit for that heroic feat, lest the public see it as some kind of fluke.

But here’s the thing: It’s all downhill from here, raising questions about the timing of Trudeau’s boasts about his ability to direct the course of a $2.1 trillion economy. If there were reasons to be wary of the future a year ago, there are at least as many reasons to be so now.

Let’s consider a couple of them.

Asset prices have defied gravity for a long time. Too long, probably. That doesn’t guarantee a stock-market crash, or the collapse of the Toronto housing market, but it does raise the odds that a significant amount of paper wealth could disappear at some point if (when) those markets correct. Pretty much every metric that analysts use to measure the value of asset prices is off the charts, in part because relatively few real-economy opportunities pushed investors into the markets for stocks, corporate debt, farm land and whatever else offered a return of more than a couple of percentage points. That means those markets are prone for a shock when the big money decides to collect profits and run.

For example: you may have read this week that Canada’s main stock index touched 16,000 for the first time. Scott Barlow, the market strategist at the Globe and Mail, wrote (subscribers only) about how the S&P/TSX composite index’s rally was mostly the result of a jump in the value of bank stocks. Most every other stock was muddling along, a reminder that the index, like Canada’s economy, depends greatly on the oil industry, which is scaling back its ambition to fit an international crude price of around $50 per barrel. The TSX quickly retreated after touching its new record, suggesting a lack of conviction on the part of investors in the Canadian economy’s staying power.

READ: If the economy is so great, why do we feel so bad?

Those investors have every reason to be skeptical, since the Trudeau boom quite likely has peaked. That’s partly because the Bank of Canada is obligated to keep the good times from getting out of hand. Growth through the first half of the year was roughly twice as fast as what the central bank estimates the economy can manage without stoking inflation, prompting it to raise interest rates in July and September. It opted against a third increase last month, but signalled it will do so again in the not-too-distant future. (Most economists on Bay Street think that will be early next year, perhaps as early as January.)

But Canada’s mini-boom also has peaked because the economy no longer has enough foot soldiers to carry on at this pace. About 68 per cent of the Canadian population aged 15 and over was working in the autumn of 2007, compared with about 66 per cent now, according to StatsCan. The Bank of Canada predicts growth of 3.1 per cent this year will be followed by expansions of 2.1 per cent in 2018 and 1.5 per cent in 2019. That’s Harper territory. Nor is it unreasonable to contemplate the possibility of Trudeau facing re-election as the economy tanks, which was the fate that befell his former adversary in 2015. The annual meeting of the International Monetary Fund and World Bank last month was upbeat because for the first time in years, the world’s major economies all were doing pretty well at the same time. But recently an economist friend reminded me of that last time that was the case: 2007, the eve of the financial crisis that triggered the Great Recession. Past isn’t prologue, but economic history does suggest that periods of calm do breed complacency, which creates the conditions for the dumb risks that eventually cause a crisis.

That might actually be a better way to measure Trudeau’s stewardship of the economy in 2019 when we go back to the polls: did he and Finance Minister Bill Morneau simply maintain steady growth, while averting disaster? If they do, then we might conclude that their plan is working.