Either Kevin O'Leary just doesn't care enough to get it right, or he thinks there's value in talking about Trudeau's "trillion-dollar deficit"

For at least the third time in less than a month, Conservative leadership candidate Kevin O’Leary has confused debts with deficits.

On January 18, during his first interview with CTV after joining the Conservative leadership race, O’Leary went after Trudeau and the Liberal’s broken promise of balancing the budget by 2019: “[Trudeau’s] told young Canadians that he was going to come in and balance the budget in 2019, and we were only going to go $10 billion in deficit. He’s now saying we’re going $1.5 trillion in deficit.”

Less than a week later, on January 24, he tweeted about Trudeau’s trillion-dollar deficit. 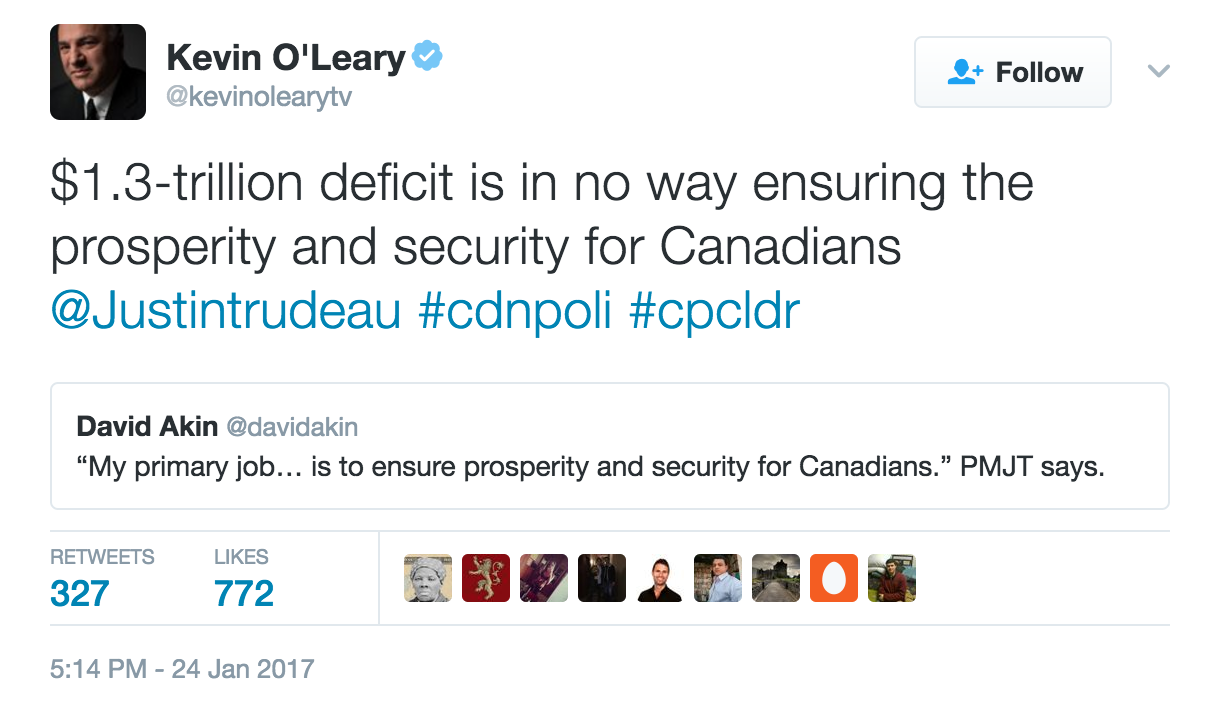 That drew the mockery of many, including O’Leary’s former Dragons’ Den co-star—and now one of the most prominent critics of his leadership bid—Arlene Dickinson. 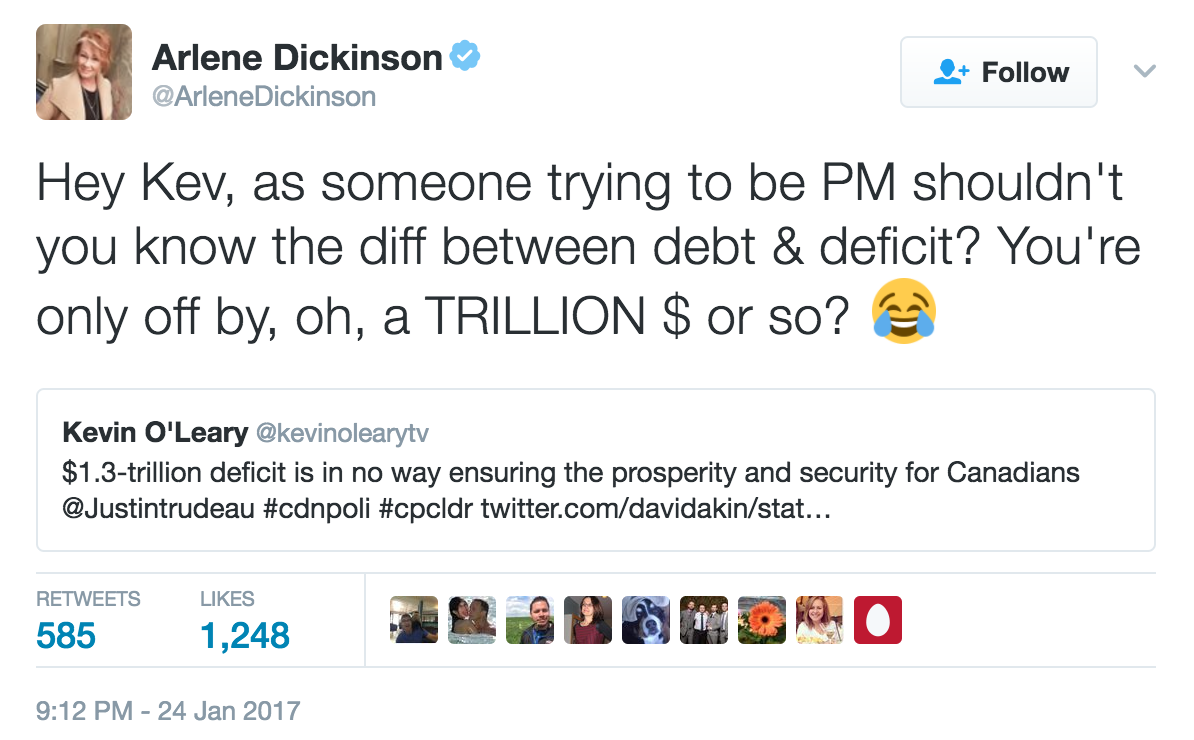 Then on Sunday, in an interview with the conservative news site The Daily Caller, O’Leary tripled-down on his warning that Canada’s deficit will cross the 13-digit threshold in the coming decades: “When I saw that Trudeau…is planning to run deficits for 38 years and end-up in a one-and-a-half trillion dollar deficit, there’s not a chance in hell I would let anyone do that: are you kidding? I’m going to fire him; he’s the worst manager of an economy I’ve ever seen.”

Granted, a lot of people get confused between debts and deficits, so let’s just state the difference: When the government spends more in a year than it generates in revenue, the result is a budgetary deficit; debt, on the other hand, is the accumulation of those annual deficits, plus interest charges.

And O’Leary sometimes does get the terminology right. “Basically, if you’re a young Canadian now and Trudeau puts this country into $1.5 trillion in debt, you will never have the opportunity that I had as a young Canadian,” he told Maclean’s last month.

Coming from any other political candidate, such regular gaffes would indicate a shaky grasp of finance, let alone an utter carelessness with language. But O’Leary has cast himself as the numbers guy in the Conservative race, the successful businessman with the financial chops needed to get the economy on track. Despite a reputation for grossly embellishing his business success and wealth, it’s inconceivable that he doesn’t know the difference between a deficit and a debt.

Which leaves us with two scenarios: either O’Leary just doesn’t care enough to get it right, or he thinks there’s value in talking about Trudeau’s “trillion-dollar deficits.” As we’ve just witnessed in the U.S., a political lie repeated enough times can find footing.

When O’Leary does get the difference between debts and deficits correct, he isn’t pulling the trillion-dollar debt figure out of thin air. It’s drawn from a background paper prepared by the federal finance department and released in December. The goal of the paper, its authors wrote, was to examine “scenarios that could occur based on current trends and policies and a reasonable set of demographic, economic and fiscal assumptions.” The paper also projected, by the way, that Canada’s economy would quadruple in size to $8.6 trillion over the next 40 years, and that the projected debt of $1.5 trillion would, as a share of GDP, actually fall from more than 30 per cent today to 17 per cent.

The Finance paper was an amusing if ultimately pointless exercise in gazing into a crystal ball and trying to imagine what the economy will look like by the mid-century mark, given the infinite number of variables at play (war, financial crises, technological change, geopolitical earthquakes). What it was not, despite O’Leary’s many assertions, was any sort of long-term fiscal “plan” for the Trudeau government.

Look, Trudeau told Canadians a double whopper during the election campaign, when he promised his government would run deficits of no more than $10 billion a year, and that he had a plan to return Canada to a balanced budget by the time of the next election. Not even a year into his government’s first mandate, that charade was blown up, replaced with the forecast for an accumulated $130 billion in deficits over the next seven years and absolutely nothing in the way of a plan to bring Ottawa’s finances back into balance.

But that’s the point. O’Leary doesn’t need to concoct a fake narrative of trillion-dollar deficits to hold the Trudeau government to account for its shoddy fiscal record. By doing so, all he does is raise questions about his own grasp on finance, or the political depths to which he’ll stoop.