Why the debate over Keystone and emissions comes down to rail 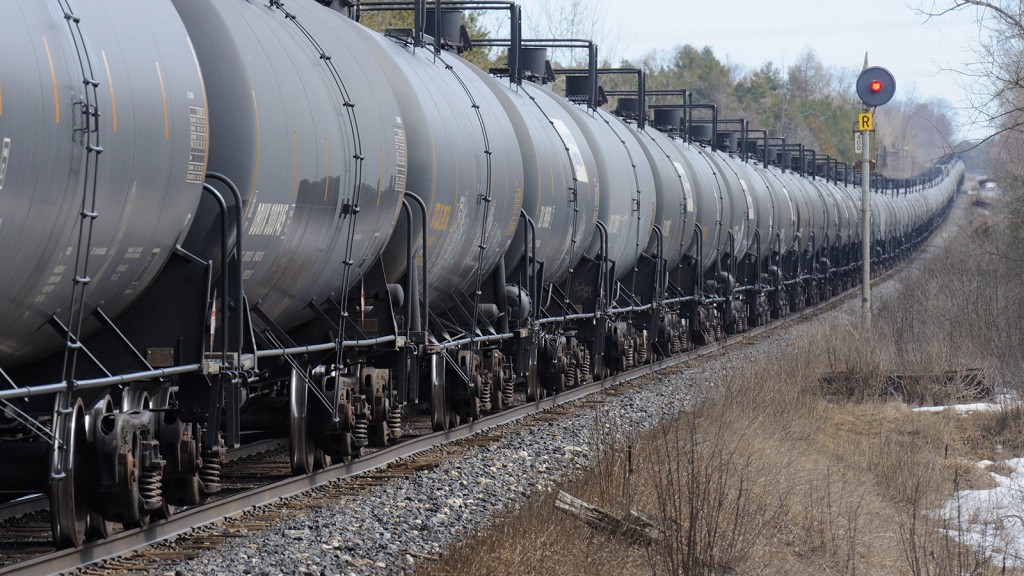 Yesterday, I wrote a long post on the basic economics of oil sands and Keystone XL in response to an article published this week in Nature Climate Change (article via Nature paywall). The article claimed that the U.S. State Department underestimated the emissions impact of the Keystone XL pipeline by up to a factor of four and my argument was that the authors failed to make the case that the change in global oil supply with, versus without, Keystone XL was actually affecting the marginal barrel into world oil markets; if you can’t show that, then you’re not going to have a global price effect from making oil sands more expensive. Further, even if you can show that, you’d have to show that the removal of Keystone XL as a transportation option does, in fact, make the marginal barrel of oil sands more expensive. If you can do both of those things, you can show that there’s a global price impact from Keystone XL and make the argument that those emissions should count in assessing the greenhouse-gas impact of the pipeline project.

As is usually the case, the discussion on Twitter after I published the piece led me to think about things slightly differently, and realize where I might have expanded some of the discussion, in particular, with respect to the second point above: What would removing Keystone XL mean to oil sands markets? To assess these issues, the consulting firms engaged to evaluate pipeline projects use large, computational models of the oil market, which solve for prices and trade flows with different assumptions with respect to infrastructure. For example, these models would predict that, if you have to move oil out of Alberta by rail to the Gulf Coast instead of by pipe, the price in Alberta will be lower relative to the price on the Gulf Coast than it would otherwise be, to account for the higher transportation costs. When you explain this using Economics 101, the various arguments made with respect to Keystone XL (and other pipelines) become very clear.

Rather than thinking about oil markets, let’s think about the market for oil transportation out of Western Canada. The supply curve would be the price-ordered list of transportation options, including existing and proposed pipelines and rail service, and other options including trucks, barges, etc. The demand curve would be a function of the existing and proposed oil sands production, and it would slope downward with higher volumes shipped as the cost of transport decreases, since higher transportation costs would erode profitability and lead projects to be left undeveloped. Obviously, there’s an important time dimension here, but let’s ignore that for now (this is Econ 101), so the basic market for transportation in 2020 might look something like this: 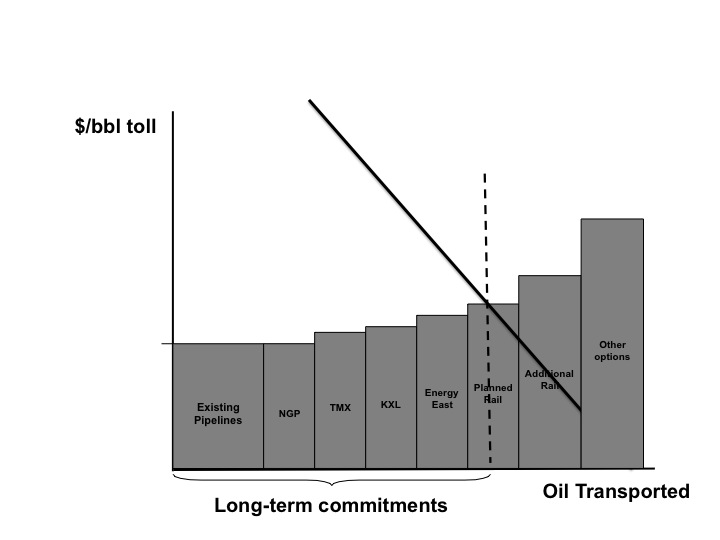 Now, there are various arguments made with respect to KXL, and let’s see if we can sum them up. The first is the oft-heard industry and government argument that “the oil will get to market” no matter what, so there is no greenhouse-gas impact of pipelines, and that would look something like this: 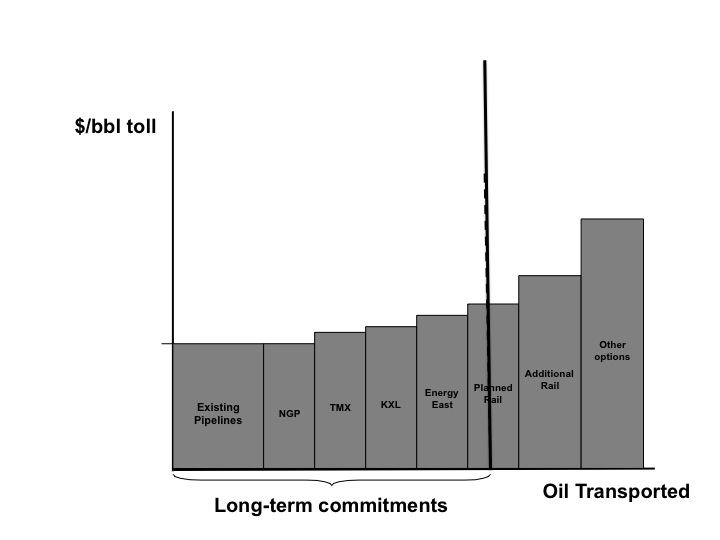 Now, I don’t think anyone really believes that the demand for oil transportation is completely inelastic to the toll costs. If you want to get industry to agree with that statement, ask them about the impact of greenhouse-gas policy costs on oil sands development, and you’ll hear pretty quickly about competitiveness concerns. The same thing would apply to transportation costs.

Where the dispute really lies in discussion over KXL is with respect to the elasticity of the supply curve of transportation options. If you talk to KXL proponents (or read the State Department report on the pipeline), the conclusion is that even though oil sands production would be responsive to increases in transportation costs, the impact of removing one pipeline (or perhaps even multiple pipelines) from consideration would be small in the impact on per-barrel costs of moving oil sands. In other words, they argue that the market looks something like this: 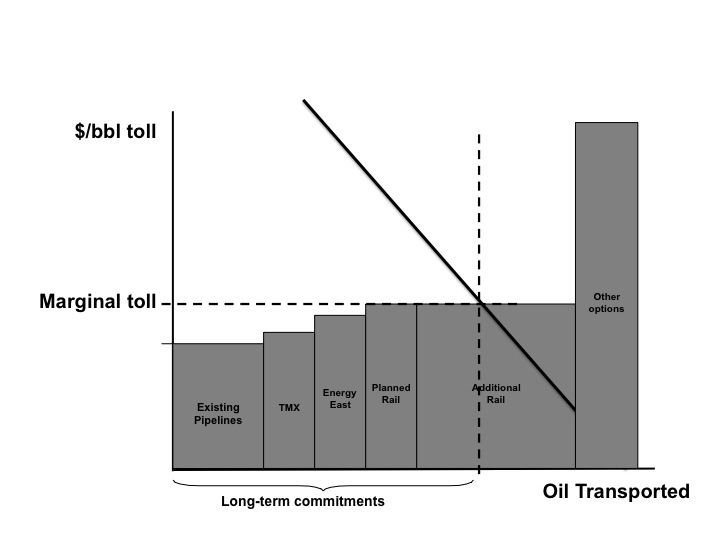 This supply structure implies that, yes, oil sands production would respond to transportation costs and, yes, oil transportation would at some point get more expensive, but there’s enough scalability in rail that the price of moving the marginal barrel of oil to market and, thus, the equilibrium price discount in the market, is not particularly sensitive to the removal of a pipeline or two from the plans. You could also make the same argument on the basis of the potential for other pipeline routes. Industry and pipeline proponents are happy to make this argument in the context of greenhouse-gas emissions, arguing that the oil will still get to market, and perhaps do so via slightly more emissions-intensive railways. However, they are less enthusiastic when one points out to them that this means pipelines don’t actually add any value to the oil, and won’t reduce the price discount relative to what would otherwise occur.

Opponents of Keystone XL and other pipelines tend to argue the opposite: that rail is not scalable and that the expansion of the oil sands is very dependent on the availability of pipelines. Their market looks like this, where there isn’t enough rail capacity to expand significantly without a large increase in tolls, and the oil sands industry is not sufficiently profitable to afford the tolls associated with rail expansion: 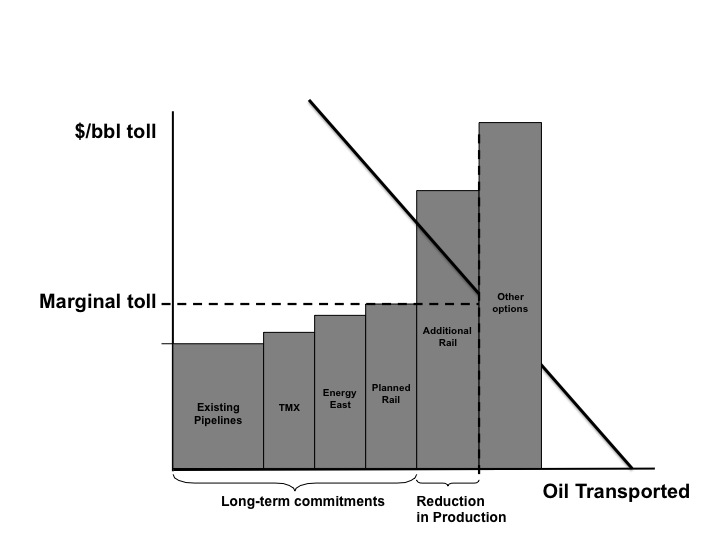 So, the Keystone XL debate really is a debate about Economics 101, but it’s not about world oil supply and demand so much as it is about the supply and demand for oil transportation services out of Western Canada and, specifically, about the possibility of alternative pipelines and the scalability of rail. If you believe that rail is scalable at or near current costs to accommodate proposed production growth, cancelling KXL won’t have a large impact on production. If you believe that the supply curve for transportation is steeply upward-sloping because rail can’t be scaled easily, and new pipeline options aren’t likely to take the place of any which are cancelled or significantly delayed, then blocking a pipeline will have an impact.

I guess this is a good Econ 101 problem, after all.