Midwives: Why aren't we paying them more?

You'd never know how popular they are from their salaries 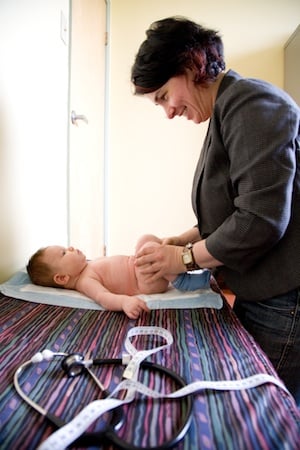 “Call as soon as you’re pregnant,” is what busy midwifery clinics advice Canadian women to do, and more and more moms-to-be are running to the phone as soon as they get a positive test result. A lucky few will get on a waiting list, even fewer will get to see a midwife.

Midwives are becoming increasingly popular across the country. Their job is backed by glowing patient reviews and by a swath of independent reports that praise the nurturing, safe, and low-cost approach to birthing championed by midwifery. But while midwives are all the rage, you’d never know it from looking at their salaries.

Data provided by the Canadian Association of Midwives show the vast majority of them earn annual incomes of about $65,000, whether they are salaried public employees, like nurses, or independent professionals, like most family doctors. Even in Ontario and Alberta, the highest paying provinces, only a handful of them (barely) break the $100,000 ceiling. In comparison, the lowest-paid salaried nurse in Ontario made $78,054 in 2009.

What really riles up midwives across the country, though, is that, despite their popularity, most of them haven’t seen a pay rise in years. Joanna Nemrava, a midwife in B.C. currently involved in contract negotiations with the province, calls midwives’ compensation there (on average $60,000 a year) “reasonable,” but points to the fact that it has been frozen since 2006.

Ontario midwives are up in arms too. “We have been forced to accept contracts that were unfair,” says Katrina Kilroy, president of the Association of Ontario Midwives. AOM is currently leading a “campaign for pay equity” aimed at bringing Ontario midwives’ compensation to what it calls fair levels after “years of being neglected,” says Kilroy.

Seven years ago was the last time Ontario midwives’ salaries saw a significant one-time adjustment–and even that came after a decade-long of pay-freeze. A 2010 independent report commissioned by the Ontario Ministry of Health found that “increases for midwives fell well below those of salaried health and social assistance employees as well as public sector salaries in health and social services over the same period.” It recommended a one-time “pay-equity adjustment” of 20 per cent.

Of course, with policymakers across Canada looking for ways to constrain ballooning healthcare budgets, it may not be the best time for midwives to be asking for a salary bump. But it’s easy to make the case that midwives are well worth the extra money they’re asking for.

Research has shown that midwives save taxpayers’ money, as they are less likely to use costly medical interventions in labour such as c-sections–one of the biggest money drains on Ontario’s hospitals, according to the Drummond Report–epidurals, episiotomies, inducing drugs, or instruments like forceps or vacuum extractors. Midwives also make a case for freeing scarce obstetricians to care for high-risk pregnancies while they handle the low-risk cases—about 80 per cent of the total. And midwifery is also a low-cost alternative in remote communities, where pregnant women have to travel long distances to give birth.

But midwives’ impact on public healthcare coffers is likely to remain marginal as long as demand for them far outstrips supply. Even in Ontario, the province with the highest number of midwives by far (the exact number is 565), four out of 10 pregnant women looking for midwifery care can’t get it. The scarcity is even greater in other provinces, some of which count fewer than a dozen midwives.

Making sure midwives are paid well would likely attract more people into the profession, saving a good amount of public money down the road.