Yesterday the White House took to Twitter to boast that in 2014, for the first time in two decades, America will import less oil than it produces. Aside from the dubious notion that the Obama administration can claim responsibility for the development, the accompanying chart was fascinating. We’re witnessing a monumental shift in the balance of energy power in the world, one that’s likely to have a profound impact on the price of oil and kneecap the fortunes and aspirations of OPEC member countries. As Daniel Yergin, vice-chairman of IHS said last week, “The United States really is experiencing an energy revolution … Around the world—from China to the Middle East to Europe to Mexico—this surge from the United States has become a top focus of energy discussion and also a new factor in geopolitics.”

And Canada, don’t forget. In 2006 Prime Minister Stephen Harper stood before a crowd of world leaders and declared this country to be an “emerging energy superpower” thanks to rising oil sands production. At the time it looked like Canada was on track to surpass the U.S. in oil production. Not anymore. 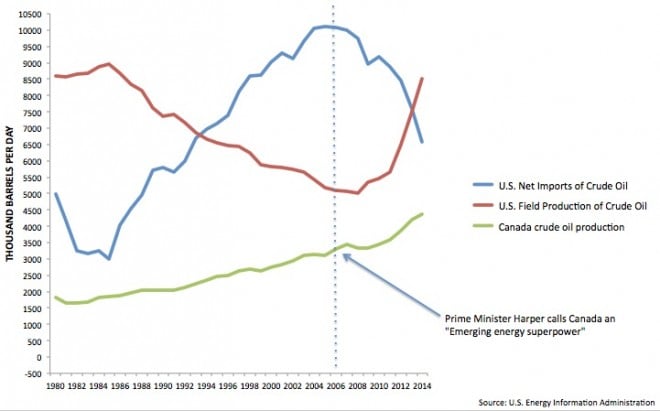 To make this chart I took all the available data from the U.S. Energy Information Administration on Canadian oil production going back to 1980. Since 2006 Canada has indeed boosted its output. But whatever gains we’ve seen here are dwarfed by America’s energy revolution. New discoveries and extraction technologies like hydraulic fracturing have unlocked U.S. oil resources long seen as unviable and out of reach.

What this means for Canada is unclear. Oil sands output continues to grow at its own impressive pace. But with oil production coming back online in Libya, Mexico promising reforms to unlock its reserves, and Iran trying to shed its pariah status to boost oil supplies, we have the makings of a good old fashioned oil glut.

With America emerging as an superpower in the oil sector too, Canada’s own resource dreams risk being dashed.