Ontario is number one. God help us. 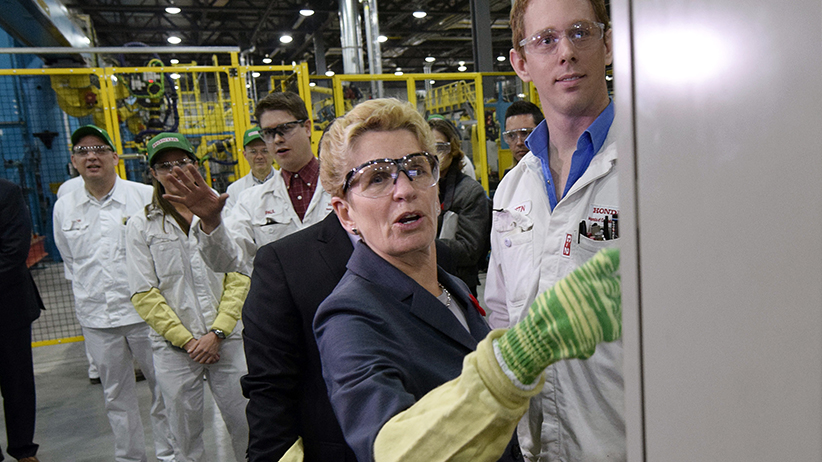 For years now, Canada’s economy has lurched forward like a man with one strong leg to pull him ahead and one gimp limb dragging behind. (Zero points for correctly guessing which is Alberta and which is Ontario). Collectively, we’ve managed a pretty decent clip, though it hasn’t exactly been hard to stand out from the pack, especially when our economic frenemy to the south had its shoelaces tied together most of that time. But all that is changing, thanks to a bunch of fracking hooligans who just kneecapped our good leg, too.

The surge in oil production from unconventional oil fields in the U.S.—a trend that has been under way for years but only seemed to catch the attention of energy markets this fall—has sent oil prices skidding. And where oil goes, traditionally, so goes Alberta’s economy. With crude weakening, TD Economics revised its provincial forecasts and now expects Ontario to lead the country with the fastest rate of real GDP growth in 2015—2.6 per cent in Ontario compared to just 2.3 per cent for Alberta. (By comparison, TD expects the final tally for Alberta’s growth in 2014 to be 3.8 per cent.)

God help us. Not since 2002 has Ontario, once Canada’s undisputed economic engine, led Alberta in growth. So it’s good to know what we can expect from the province that is going to carry Canada’s economy forward for at least the next year—and, depending on what happens with energy prices, possibly longer.

Let’s start with the ugly before moving to the extra ugly. Last month, Ontario’s auditor general warned that by 2017-18, the province’s net debt will top $325 billion, double where it was just before the 2008 recession. (In late December, the debt-rating agency Fitch downgraded Ontario’s credit rating from AA to AA-). The Ontario Liberals have vowed that by 2018, they will have eliminated the province’s $12.5-billion deficit and be well on the way to cutting its debt burden, but there are so many strings attached to that promise, it’s hardly worth considering.

Ontario’s abysmal demographic picture will only make matters worse. In the last decade, the number of Ontarians aged 24 and under has flatlined, while over the same period, the population of those aged 55 and up has jumped 37 per cent. Sometime in 2015, that older group of workers, well on their way to retirement or already in their golden years, will surpass the number of young people in Ontario for the first time ever. Ontario has already been a net exporter of people to other provinces for 11 straight years. It’s hard to see that flow reversing in short order. Taken together, these trends will restrict government tax revenue and make it all the more difficult to fix Ontario’s fiscal crisis.

Now, if Premier Kathleen Wynne had a bold plan on the table to right Ontario’s economy, one could at least see a way out of the morass. No such luck. The government’s strategy has instead been a hodgepodge of hope, pray, and blame Ottawa. Having spent weeks complaining that Prime Minister Stephen Harper was refusing to meet with her, Wynne most recently suggested Harper might have a “vendetta” against Ontario—even as the federal Department of Finance revealed the province will get an additional $1.25 billion in transfer payments in 2015, bringing its total haul from the federal government to $20.4 billion next year, the most of any province. Apparently, whining pays.

There really is only one thing Wynne can do to put Ontario back on a self-sustaining path, and that’s give entrepreneurs and business leaders a reason to operate and expand in the province. It’s an outrage that Ontario hasn’t spawned a single new company of great international significance in years, certainly nothing close to the scale of BlackBerry in its glory days. That has to change, if Ontario has any hope of luring workers from other provinces and countries to live there.

What that doesn’t entail is throwing billions of dollars in bribe money at a few select companies for job-creation publicity stunts. Nor does it mean Ontario should keep funnelling taxpayer money into the pockets of the automakers in a desperate ploy to keep low-grade factory-line jobs from shifting out of the country. The ingredients are actually quite simple, in fact: Create a stable, low-cost environment with attractive tax rates and some measure of certainty that those rates are not going to keep going up.

No one should hold their breath. During last June’s provincial election, Ontarians rebuffed the small-government vision clumsily sketched out by the Tim Hudak Conservatives, and instead gave Wynne a resounding mandate to forge ahead with her idea for an Ontario pension plan. So be it. But while details are still fuzzy, the plan will impose new payroll taxes on those businesses that don’t already offer a workplace pension plan the government deems satisfactory. In short: bigger government and higher taxes. No wonder the Wynne government has to pay companies to move to Ontario.

No question, there are forces working in the province’s favour. The lower dollar and cheaper oil will help those manufacturers that haven’t already closed up shop and left. And Ontario will benefit as U.S. growth kicks into a higher gear. But with so many self-inflicted wounds, Ontario is years away from providing Canada with the kind of economic lift Alberta provided over the last decade. It will be a marvel if we don’t fall on our faces.