Why putting a price on carbon emissions is a more effective way to tackle climate change than setting emissions targets. 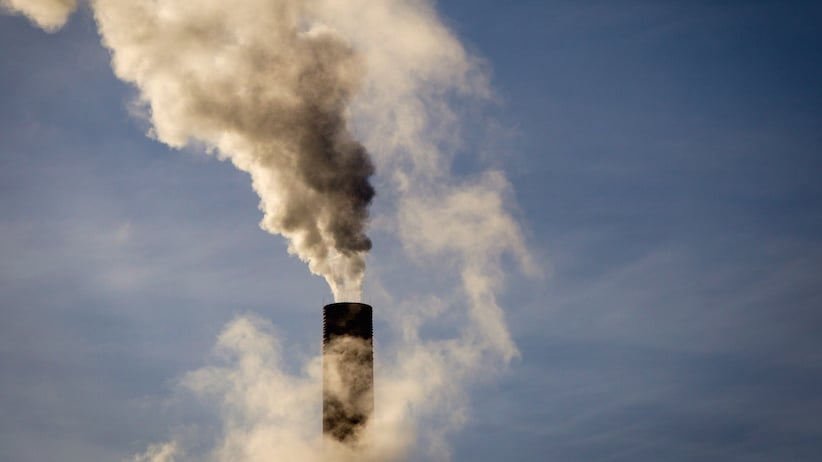 This week, Parliament will debate and vote on ratifying the Paris Agreement—an international agreement to address climate change. The government also announced today a $10 per tonne national minimum price on carbon emissions by 2018. This will rise by $10 per year until it reaches $50 per tonne in 2022.

Many questions remain. How will Ontario and Quebec’s cap-and-trade systems be treated? How broadly must the price on carbon be applied? What allowances will be made for other programs that implicitly (rather than directly) price carbon, like phasing out coal electricity? Will there be specific provincial emissions targets that, if met, exempts those provinces from the minimum price?

Today’s announcement certainly changes the discussion slightly. Moving us away from quantities, and toward prices. This is subtle, but very important. Why? Let’s start there.

Price is what matters

The federal Liberal government will adopt the previous Conservative government’s greenhouse gas emissions reductions target: 30 per cent below 2005 levels by 2030, or roughly one-third below where emissions would likely be under current policies.

Debates rage over whether the target is too tough, or not tough enough. Many dismiss them out of hand–after all, we’ve missed every other target. But worse than missing targets is setting them in the first place; they’re aiming at the wrong thing.

To be sure, emissions matter. They cause climate change, and thus impose costs on others. We ultimately want global emissions to fall, but the key word here is: global.

From the perspective of climate change, it doesn’t matter where the greenhouse gases are emitted, just that they are. Canada’s specific share of the total doesn’t matter. This holds for provinces and cities, and also for individual sectors, firms, and households. How the reductions are apportioned is a political and an economic question, not an environmental one.

Ideally, we would lower global emissions in the cheapest possible way. The trouble is governments cannot know which options are in fact cheapest. That knowledge is dispersed among millions of individuals spread throughout the economy, each making individual decisions.

This is where prices come in.

If we can set a price on emissions, those with cheap abatement options available will do so. Those that don’t, won’t. If emitting a tonne of greenhouse gases cost you $30, for example, and you had a way of avoiding that emission at a cost of $10, then you’d avoid the emission. Incur a cost of $10 to avoid paying $30. For others, it might cost $40 or $50 to lower emissions by that same one tonne, so they would rather pay the tax instead. That is precisely the optimal outcome.

For provinces, we will therefore hopefully not see specific targets. To illustrate why quantities are not the proper way to compare provinces, consider estimates compiled by Canada’s EcoFiscal Commission. By 2020, Quebec’s cap-and-trade system is currently projected to have a price around $19, and emissions may be about 15 per cent relative to where they would otherwise be. Meanwhile, Alberta will soon have a $30 per tonne price but 2020 emissions are projected to be only seven per cent lower than otherwise. But Quebec isn’t “doing more” than Alberta; they just happen to have more low-cost abatement options. In fact, by 2020 Alberta’s carbon price will comply with the federal minimum, while Quebec’s and Ontario’s may not.

How the federal government treats the cap-and-trade system will be a critical aspect of the plan to watch. It may very well be that if Ontario and Quebec lower emissions by some amount, they’ll be exempt from the minimum price. From an efficiency perspective, that would be unfortunate.

Emissions affect the climate; and a changing climate imposes costs on others. These are externalities that aren’t accounted for by individual decisions made by businesses or households. To fix that, we can price those emissions so we only emit if the benefit from doing so is less than those external environmental costs imposed on others.

Unfortunately, estimates of the monetary costs of emissions vary widely. For Canada, the mid-point of the (very large) range is about $45 per tonne in 2020, rising to $75 by 2050. Much depends on model assumptions, and the following illustrates how big the range can be. 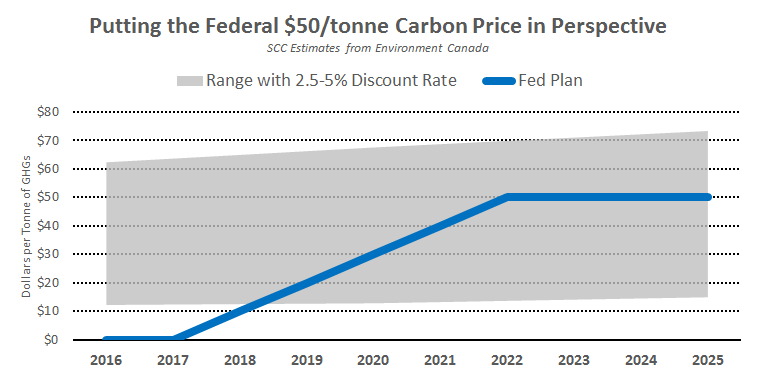 In any case, the federal price is within a reasonable range of estimates and not obviously too high or too low. (For a full discussion of the cost of carbon estimates, see this.)

It is also important to note that such uncertainty applies to country-specific emission targets too, which suffer the further disadvantage of abstracting from the necessary policy to achieve them. Prices, on the other hand, represent the very tool that leads individual decision makers to internalize the external costs of their actions. They’re also transparent, and focus the debate. For any global emissions level, there is (in principle) a price that will get you there. But given that price, who emits what and where is no longer relevant.

What will happen to the revenue?

Revenue will stay in the provinces. How individual provincial governments recycle that revenue is up to them. There are many options available (see a review here).

This will be an important (and sometimes big) decision, as the revenue from a $50 per tonne tax is potentially very large. Of course, the devil is in the details, but here’s a ballpark estimate using 2013 emissions levels and expressing the revenue as a fraction of total government revenue in each province. 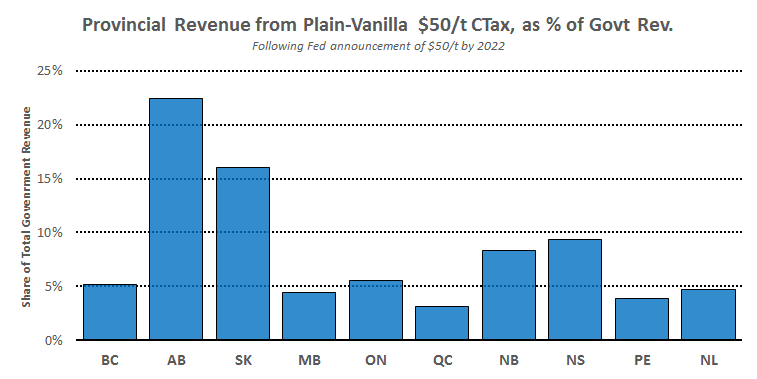 Clearly, this is big for Alberta and Saskatchewan especially. The incremental revenue to Alberta (which will already have a $30 per tonne tax in place by 2018) will be more on the order of $3.5 billion to $4 billion. It will be up to the provincial government to decide what to do with this.

The debate around this move by the government will only grow over the coming months and years. The government is also considering the future of the NEB, of environmental reviews, of major resource projects, and so on. Today’s announcement may also change the conversation in these other policy areas.

Opposition to pipelines or other major projects often revolve around concern over greenhouse gases. Last week, for example, the government approved the Pacific NorthWest LNG facility in B.C., which will be a major emitter of greenhouse gases. Some complain this facility will cause B.C. to miss the province’s emissions target. But if the emissions are fully priced, then why does that matter? It doesn’t.

It’s not just LNG. The federal government now considers the direct and upstream greenhouse gas emissions when deciding approval of all major natural resource projects. For pipelines that transport Alberta oil, though, emissions associated with production are already priced at $30 per tonne. With today’s announcement, the price will rise to $50. A secondary review of GHG emissions is redundant at best, and economically damaging at worst.

As there is still so much to be worked out, and the debate will only grow louder, let me offer this to help cut through the rhetoric: while emissions impose costs on others, a tonne is a tonne is a tonne. Government should put in place policies that internalize those costs, incentivize the lowest-cost abatement options, and recognize that those options may not be within a specific project, province, or country. The government should a price on carbon, a reasonable price, but then let the chips fall where they may.

Trevor Tombe is an Assistant Professor of Economics at the University of Calgary, and a Research Fellow at the School of Public Policy