Refine it where you mine it? The value-adders are back.

We should be finding the most lucrative markets for our bitumen and charging an appropriate rate to extractors, writes Andrew Leach 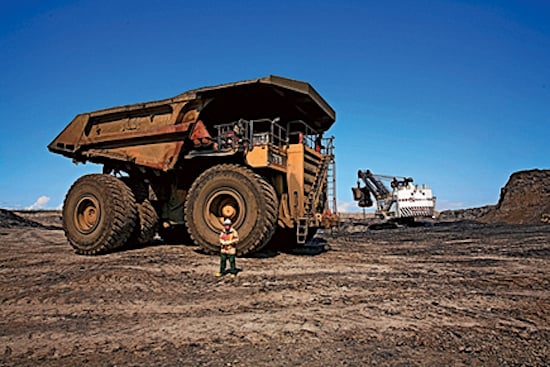 In December, I wrote about the propensity for some to oppose pipelines on the basis that we should be refining the oil here, rather than shipping raw resources out of the country to more lucrative markets elsewhere. With today’s Northern Gateway announcement from the federal government, the value-adders are back. Given conversations I’ve been having on Twitter for the past couple of days, I thought I’d try to provide a few longer answers to some common questions.

1) Don’t you believe in value-added?

Yes, of course—mostly. Value-added in the strict economic sense implies that you generate value over-and-above the value of the inputs used in the process. In the case of refining, this should imply that the value of the refined product exceeds the value of the crude oil or bitumen feedstock by a sufficient margin to make up for the opportunity cost of the capital, labour, and other inputs used in production. Statistics Canada uses a particular definition of value-added, in which it effectively assigns the opportunity cost of capital and the value of labour to zero, which allows them to calculate the value-added of any activity as being equal to the sum of the profits, taxes, royalties and wages. According to this calculation, a refinery that breaks even in revenue to the operator net of depreciation of capital would be considered to add value, since the wages paid to employees would be positive.

Here’s my problem with that calculation: The opportunity cost of a tradesperson, engineer, or manager who might be employed in a refinery is not zero, as these people would not otherwise be unemployed. In fact, if we had an unemployed refinery workforce at the ready, it would be much easier for a company to build a refinery here.

2) So you think we should simply ship our raw resources?

No, I think we should maximize the value of our resources, not the degree to which we process them. Let me give you an example. It’s easy to look at a graph like the one below and conclude that we should refine more of our own oil, with bitumen priced, on average, $60 per barrel below the price of gasoline over the first half of 2014, when you’re not betting your own money. Now, think of building a refinery. To build a refinery to process the volume of bitumen proposed for shipment through Northern Gateway (about 400,000 barrels of bitumen, net of diluent), you’d likely have to: invest somewhere between $20 billion and $30 billion; wait five or more years to obtain all the permits and complete construction; and likely spend about $10 per barrel in operating cost to capture that spread. Still, it’s a great investment if you can count on $50 per barrel in operating profits. The question is whether you can count on that. If you can, a refinery under these conditions would be a no-brainer for any company.

It’s important to think about the other side of the ledger, though (the refinery in this case would be underpinned by discounted bitumen): our resource trading below its fair price on world markets. The real question we should be asking is not whether more refining is viable, given discounts on bitumen, but why we are selling our resources at a discount.  If refining truly increases value, based on the true value of bitumen, I can’t see why you’d need a government to force it to happen.

I can’t see how advocating for policies which would devalue our resources under the guise that it allows domestic processors to add value to them makes sense.

Yes, in a simple calculation. In some research I pulled together for a conference put on by the MacDonald Laurier Institute, I looked at this issue by comparing three projects: a stand-alone bitumen mine similar to Imperial Oil’s Kearl Project, the same mine coupled with an integrated upgrader, or with a hydrocracking refinery. 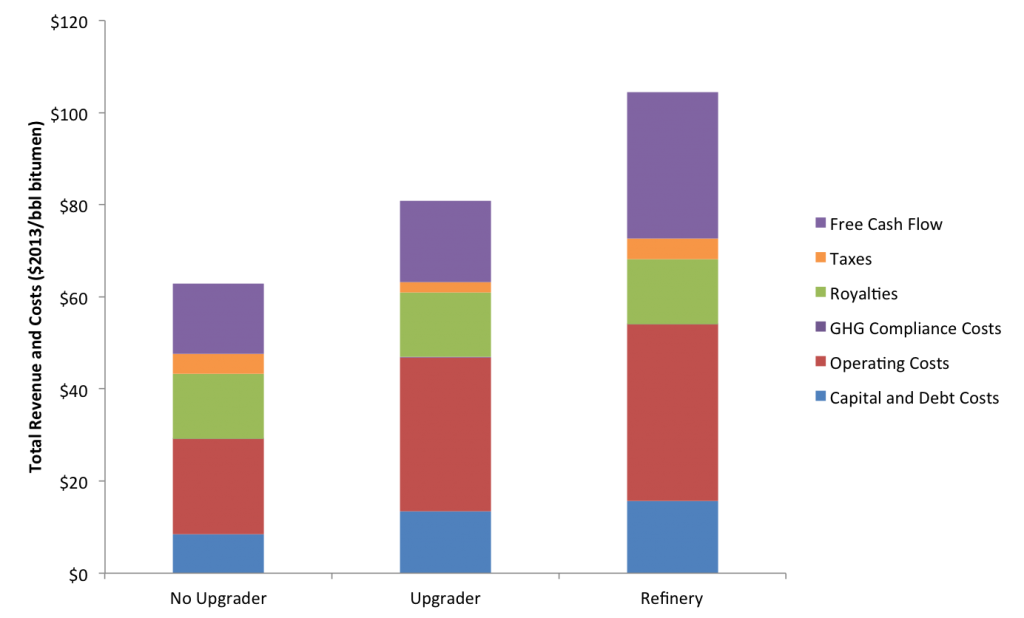 Operating and capital costs for bitumen extraction, upgrading, and refining

Obviously, the revenue per barrel produced and the total revenue over time is higher as you undertake more processing and produce a higher-value product. I want you to remark on a couple of other elements: First, the average taxes and royalties per barrel decrease as you increase the degree of processing, and the profit share of total revenue increases. Why? Because the added processing earns lower rates of return on capital and, so, takes longer before it begins paying taxes and, since royalties are only charged on bitumen, the royalties don’t increase with more upgrading or refining. By contrast, in free cash flow per barrel of bitumen produced, the refinery option looks much, much better. If you count operating costs as benefits, which some would, because these costs include wages, these also increase with the refinery. Based on this analysis, it seems clear that companies should seek to build more refining.

But, as discussed above, Canada does not have reams of workers simply waiting around for the next refinery to open. The more likely scenario is that any increased activity in one part of the oil and gas sector will detract from another part; more refining would mean fewer other things, due to general equilibrium effects in the labour market, and so on. It’s not going to be perfectly zero-sum, of course: The increased activity in the oil and gas sector might cause a shift in resources from other manufacturing sectors, instead. What happens if we take that tradeoff seriously, and look at the returns per dollar invested? The graph below looks at what happens if we invest the same dollars we would have invested into extraction into smaller extraction projects with associated value-added processing. 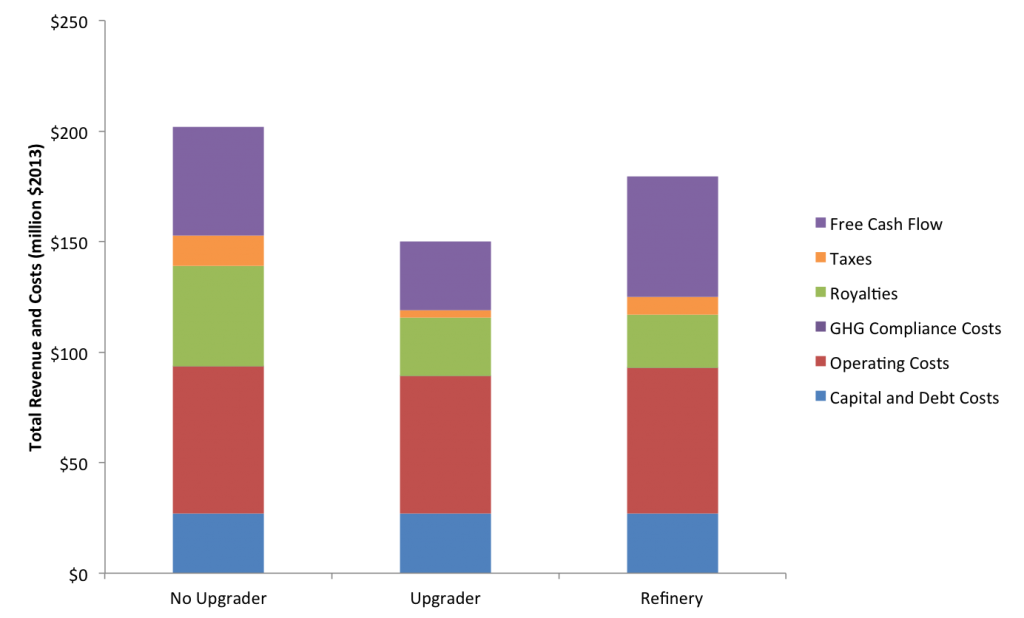 Operating and capital costs for bitumen extraction, upgrading, and refining

The picture changes a great deal. If we’re going to talk about what “we” should invest in, the above graph really muddies the waters. In taxes and royalties, it’s no contest—extraction wins. In payments to labour, the three investments  are fairly similar. In profits, the extraction plant with an integrated refinery earn a little more, given current pricing conditions, and a little less if you look at global pricing conditions.

4) Fine, so we’re stuck just giving away the bitumen.

No, exactly the opposite. We should be finding the most lucrative markets for our bitumen and making sure that we charge an appropriate rate for companies extracting it. We must take advantage of cheap, global refining capacity to maximize the value (again, as opposed to maximizing the processing) of our resources. Go back to the first graph, and ask how much bitumen should be worth if someone somewhere can convert it to gasoline for $10 per barrel—it should be worth gasoline prices, net $10 per barrel plus transportation costs to get it to their refinery. If we choose to have our bitumen processed in a more expensive refinery, we can make the math work only with either a discount on the bitumen or with other incentives; we’d be spending bitumen to finance refining. If your worry is that we’re not getting enough value for our bitumen, that’s a legitimate question to ask, but I’d ask whether you’d accept to have those higher royalties spent on subsidized refinery. If not, then don’t advocate for underpinning a refinery with bitumen discounted via trade policy. It’s exactly the same thing, with the intermediate step hidden.