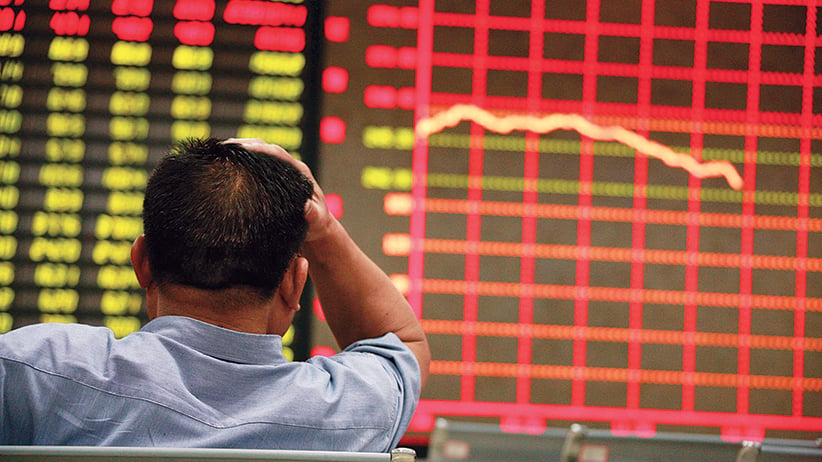 Back in the mid-2000s, giddiness over the prospects for green energy meant pretty much any hoser with some solar panels could land financing and launch a company. Countless hundreds worldwide did just that. Many have since tanked. But only one solar flame-out mattered this week: Shanghai’s Chaori Solar, which stiffed its bondholders on an interest payment and, in the process, became a twisted symbol of China’s march to capitalism.

Or at least, that was how the analysts and investors who’ve bet big on the rise of the Middle Kingdom see it. That the Communist government allowed Chaori to default on US$160 million worth of bonds, rather than sweep in with a rescue, has been hailed as a “watershed” moment, a “breakthrough” in Beijing’s effort to instill free-market ideals of risk and individual responsibility. Against a backdrop of deeply troubling economic data in recent weeks, China’s embrace of reforms has been held up as its saving grace.

But hold on. Companies in China now carry a whopping US$12 trillion in debt, a sum 1.2 times greater than the value of the entire Chinese economy. (In the U.S., corporate debt is worth more in the range of 75 per cent of GDP.) Local governments hold another US$3 trillion in debt. Much of that money vanished into dubious projects, such as ghost cities and bridges to nowhere that had little commercial value, but which juiced China’s economic growth and keep its restless populace employed. The rate of non-performing loans at Chinese banks is on the rise, while over the past few months, interest rates on loans between Chinese banks have twice spiked above 10 per cent—a sign that financial institutions are nervous about what dark secrets lurk in each other’s vaults. That’s how a liquidity crisis starts, folks. No wonder state censors barred journalists from using the term “credit crunch” in their reports.

But are Western analysts and investors spooked? Not at all, they argue, because China’s powerful central government would never allow a run on the banks that could threaten the country’s growth. Instead, it will do what it always does: marshall its vast resources to provide a floor for the economy.

And there you have it. The unceasing optimism with which Wall Street and Bay Street—and, by extension, Western politicians, companies and investors—view China is now fuelled by two completely contradictory assumptions. Market reforms undertaken by President Xi Jinping will free China from its dangerous dependence on wasteful investment spending, but when trouble hits and China needs to spur growth, it can always turn to wasteful investment spending. 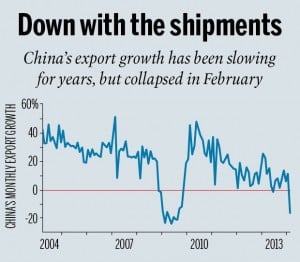 You can’t have it both ways, though most of the world seems to be trying to convince itself you can. It’s the flaw in the Chinese growth miracle no one wants to acknowledge because everyone has so much at stake.

And now is a terrible time for self-delusion. China’s stimulus-driven growth, as empty and flawed as it increasingly seems to have been in recent years, helped keep the global economy afloat after the recession. Yet the past few weeks have seen an unending flood of bad news out of China. It stunned economists by reporting an 18 per cent drop in exports last month. (The forecast had been for an increase of five per cent.) It was the most dramatic slump since the U.S. financial crisis, and it left a gaping trade deficit of US$23 billion, compared to a surplus of $32 billion in January. Factories have also seen the prices they receive for their products continue to weaken: Producer prices fell two per cent in February, and have been sliding for 24 months, the longest decline since the late 1990s.

While most in the West may be inclined to blithely overlook these problems and the rumblings in China’s credit markets, some observers, such as Patrick Chovanec, the chief strategist at Silvercrest Asset Management and a former associate professor of economics at China’s Tsinghua University, are far more worried by what they see. “These repeated crises are a sign that the foundations of China’s investment-driven growth model are crumbling,” he wrote recently, “with unsettling implications for the rest of the global economy.”

Still, announcements of new market reforms continue apace, to the cheers of onlookers. This week, China approved the creation of five privately owned banks that will operate on a “trial basis.” And China’s Premier Li Keqiang vowed in a speech earlier this month to “defuse debt risks” with vague reference to a government debt-reporting system.

Given the problems facing China, these measures amount to fiddling at the edges. Not that investors will mind. If they were ecstatic when the government turned a blind eye to the default of a solar company accounting for 0.001 per cent of the country’s staggering corporate debt load, you get an idea of how low the bar has been set.