Stephen Poloz's journey from sunny to sour to so-so

The Bank of Canada now sees Canada's economy returning to its full potential earlier than it expected just months ago, but risks remain 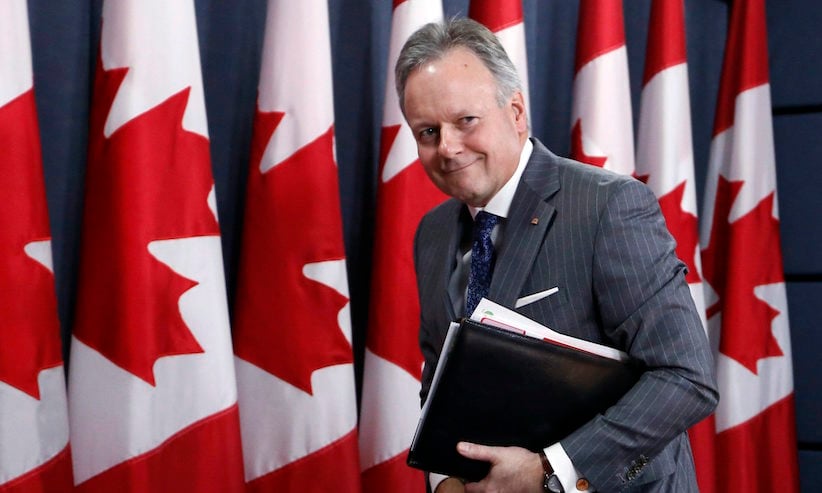 Stephen Poloz, Governor of the Bank of Canada, leaves a news conference after the release of the bank’s Monetary Policy Report, in Ottawa, Wednesday, April 12, 2017. THE CANADIAN PRESS/Fred Chartrand

Bank of Canada Governor Stephen Poloz likes to compare his main job at the moment to biking up a hill. Ask him why the economy sucks despite record-low interest rates, and he’ll respond with a question of his own: what do you think would happen if the central bank stopped peddling? Right. The economy would start rolling backwards and topple.

The Bank of Canada on April 12 upgraded its outlook for economic growth in 2017 to 2.6 per cent, which would be almost double last year’s growth rate. Canada hasn’t seen a gain like that since 2011, when high commodity prices helped the country forget the Great Recession. When those prices collapsed anew a few years later, the central bank dropped the benchmark interest rate back to its crisis-era setting of 0.5 per cent. Poloz and his advisers on the Governing Council have been chugging up that metaphorical hill ever since.

Now comes a shift. “We’re decidedly neutral,” Poloz said at a press conference in Ottawa after the release of the new forecast.

That won’t sound like much to a normal person, but the comment means higher interest rates are back on the horizon. Poloz was pushing hard against this idea not all that long ago. Last October he went so far as to declare that his rate-setting panel had seriously considered cutting interest rates. He told bond investors and currency traders that they were mistaken in their belief that Canada would track the United States, where the central bank has raised interest rates twice since December. Now, Poloz is heading back to a sunnier place. The road back to “normal” interest rates goes through “neutral,” a place where the central bank must stop to assess things.

The new assessment is still tinged by doubt. “Governing Council welcomes the recent strength in economic data and wants to see more of it in order to be more confident that growth is on solid footing,” said Carolyn Wilkins, the senior deputy governor, who joined Poloz at the press conference. “We judge that the economy still has material room to grow.”

In January, the central bank underestimated Canadians’ lust for real estate. The federal government’s latest round of measures aimed at constricting demand were starting to bite, so the Bank of Canada assumed investment in real estate would actually contract in 2017. Instead, prices in Toronto surged, demand in Calgary recovered, and construction on new homes jumped to levels well in excess of what is necessary to keep up with changes in population. The central bank doubts a repeat in 2018. Debt is too high for consumption to continue at its current pace. (Canadians also have been binging on automobiles.) It assumes no economic boost from housing next year and a smaller contribution from household spending.

The Bank of Canada is probably okay with that. The house-price bubble, combined with record levels of household debt,  represent the biggest threat facing the Canadian economy; the sooner real-estate markets mellow and Canadians lower their debt burdens, the better.

Yet the other engines still are sputtering. Wilkins said they see the, “start of a slow creep,” to increases in business investment after years of chronic disappointment. Exports continue to struggle. Both investment and international sales are impeded by worries over rising protectionism. President Donald Trump is in the heads of Canadian executives, who tell the central bank they either are delaying expansions or making plans to invest in the U.S. in order to avoid whatever border harassment Trump may have in store. “A notable increase in global protectionism remains the most important source of uncertainty facing the Canadian economy,” the central bank said in its quarterly report on the economy.

The pessimism annoyed some of the Bank of Canada’s followers on Bay Street. “The growth outlook may be sunnier, but it seems to be all about the negatives for Governor Poloz,” grumbled Brian DePratto, an economist at Toronto-Dominion Bank. Some will see the central bank’s emphasis on the risks as part of a game to keep currency traders from bidding up the value of the dollar. The Bank of Canada routinely describes exporters as generally uncompetitive, so a weaker exchange rate acts as a crutch.

In fact, Poloz has managed a deft transition. There are more holes in Bay Street’s thesis that the good times have returned than it cares to admit. Debt-fueled consumption is fine, but it can’t last forever. The Bank of Canada’s assessment of all the wage data at its disposal implies salaries are growing slower than inflation, never mind credit. At the start of the year, it looked like a Washington ruled by Republicans would orchestrate significant tax cuts by now. That hasn’t happened. There is no clarity on what Trump has in store for trade. The headwinds could blow for years.

And despite that, the central bank brought forward its estimate of when the economy will achieve a level of output that begins to put pressure on inflation. Policy makers now assume the “output gap” will close in the first half of next year, compared with a previous estimate of the middle of 2018. All things equal, the Bank of Canada will begin raising interest rates ahead of that moment to ensure it stays ahead of inflation.

That’s what the naysayers on Bay Street wanted to see. And they got it.