Stephen Poloz is still concerned about trade and housing, but the era of low-for-longer interest rates is nearing its end 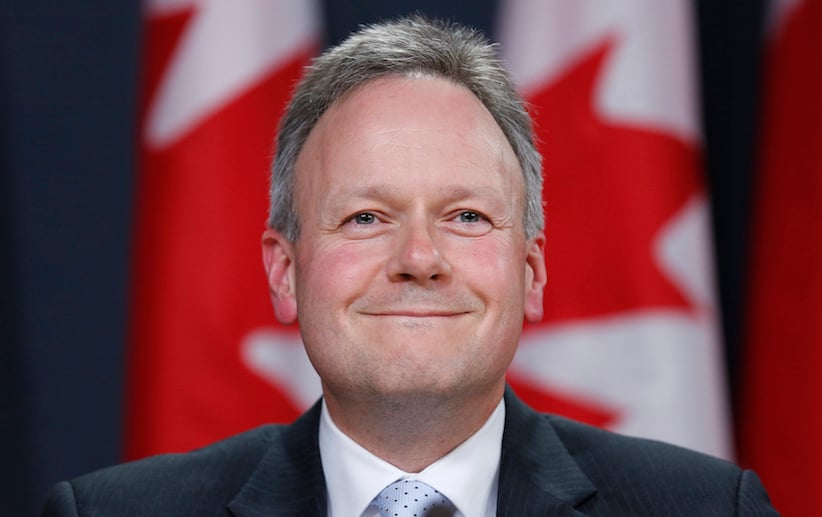 Sunny Stephen is back.

If you have been following along, you will know that Bank of Canada Governor Stephen Poloz and a number of Bay Street economists have been at odds this year over what shade to use when colouring the spaces around the outlook for the Canadian economy.

With economic indicators suggesting gross domestic product grew at an annual rate of four percent in the first quarter, the Bay Streeters insist the future is bright. Yet the Bank of Canada’s depictions have been more subdued, clouded by uncertainties such as the potential horrors of trading with Donald Trump’s protectionist America. The contrast is made more stark by an odd role reversal; earlier in his tenure, Poloz received grief for being stubbornly optimistic. Some of his current critics used to call him “Sunny Stephen,” and they didn’t mean it as a compliment. Then as now, Poloz said the caricature was unfair.

Poloz and Bay Street may never learn to understand each other. For financial markets, the lights are either on or off, while for Poloz’s Bank of Canada, everything is nuanced.  But after months of vitriol, their outlooks are starting to converge. In April, Poloz said the Bank of Canada was, “decidedly neutral” on the question of whether the most likely path for interest rates was higher or lower. That was a shift from earlier in the year, when he maintained that an interest-rate cut was on the table. On Wednesday the central bank pivoted again, releasing a notably upbeat assessment of the state of the economy. The value of the dollar popped on the news. Prices tied to the Bank of Canada’s outlook are headed higher.

RELATED: Stephen Poloz’s journey from sunny to sour to so-so

The occasion for the release was the end of the Bank of Canada’s latest review of whether it is on track to hit its inflation target. Policy makers opted to leave the benchmark rate unchanged at 0.5 percent. That wasn’t a surprise. But those who thought Poloz was stuck in a permanent funk were caught off guard by a series of rosier descriptions of the economy. The central bank said the global economy, “continues to gain traction,” and that, “recent developments reinforce the bank’s view that growth will gradually strengthen and broaden.” The economy’s painful adjustment to lower oil prices is, “largely complete.” Recent economic data are, “encouraging,” including indicators of business investment, an important element of economic growth that has been depressed for years.

The emphasis on business investment is significant because Poloz had been skeptical about the extent to which Canadian executives were ready to re-engage after years of weak commodity prices and mediocre demand. Some of that skepticism remains. The uncertainties that troubled the central bank in April, “continue to cloud the global and Canadian outlooks,” the statement said. The biggest one is trade. The Trump administration in recent weeks applied tariffs to imports of Canadian lumber, agreed to investigate charges that Bombardier is using government subsidies to sell its new plane at unfair prices, and triggered the legislative process that will lead to a renegotiation of the North American Free Trade Agreement. It’s possible that worries about protectionism are overdone, but it would be foolish to assume exports will flow south as easily as they have in the past. The central bank has little choice but to continue to offset that uncertainty with rock-bottom borrowing costs.

The other big risk is a housing bust in Vancouver, Toronto, or both.

Real estate has been Canada’s primary economic engine for years, but it looks like it could be about to blow. The Bank of Canada said that, “very strong” growth in the first quarter was partly the result of “robust” consumer spending. Those consumers are carrying record levels of debt, so it’s unlikely they can be counted on to carry the economy for much longer. That’s why a sudden drop in home prices is so scary. Some of that spending is driven by homeowners made wealthier by the surge in house prices. If those wealth effects fade, so will consumption. Newer owners could end up with assets worth barely more—or even less—than their mortgages. Those households would be doing little discretionary spending at all. The economy would suffer, and maybe even crash.

But the Bank of Canada appears to be marginally less concerned about that now. Policy makers are in the process of writing their twice-a-year report on financial risks, so the latest housing data would have been close when the Governing Council gathered to talk about the interest-rate setting. (The next Financial Stability Report will be released in early June.) The central bank acknowledged that governments had so far failed to slow the ascent of housing prices, but that various measures had successfully reduced the number of risky borrowers entering the market. That’s important. The Bank of Canada is agnostic on prices. What it cares about is whether buyers can afford to make their loan payments, and it appears to think most of them can.

So what does it all mean? Poloz won’t be rushed into raising interest rates. His primary job is keep annual inflation at around two percent, and the latest policy statement was clear there was no immediate danger of prices exceeding the target. Nor is Poloz feeling any pressure to force an end to Canada’s housing exuberance. That likely will be enough to allow the central bank to wait until at least early next year before it adjusts interest rates. But the Bank of Canada is beginning to believe that the signal being sent by this year’s run of strong economic data is real. Unless something drastic happens, the era of low-for-longer interest-rate policy is nearing an end. Prepare accordingly.