With little cash left in the kitty, and facing big deficits well into the future, a ‘do-nothing’ budget could be the best Canadians could have hoped for

Much like the ’90s sitcom “Seinfeld,” Budget 2017 was largely a show about nothing. If you were a kid, it would be the fiscal equivalent of waking up to an empty stocking on Christmas Day after being good all year, save for maybe a couple of clementines in the form of modest new spending toward the tail end of the forecast. In total, new spending in Budget 2017 reaches about a cumulative $4.8 billion dollars over six years—more than most of us have under the couch cushions but a rounding error on annual total spending of around $300 billion.

But this may be for the best. Starting from the Annexes, where most of the important budget numbers can now be found, the outlook for big deficits hasn’t changed all that much from what was published in the fall of 2016. While deficits are somewhat smaller in the coming few years that was expected in November 2016, they are larger by the end of the forecast. And although the deficits are larger when you compare the numbers with Budget 2016, the story is pretty much the same (Chart 1). Where you start seeing big differences is when you compare the last couple of budgets with Budget 2015, when the federal government of the day forecasted surpluses as far as the eye could see. 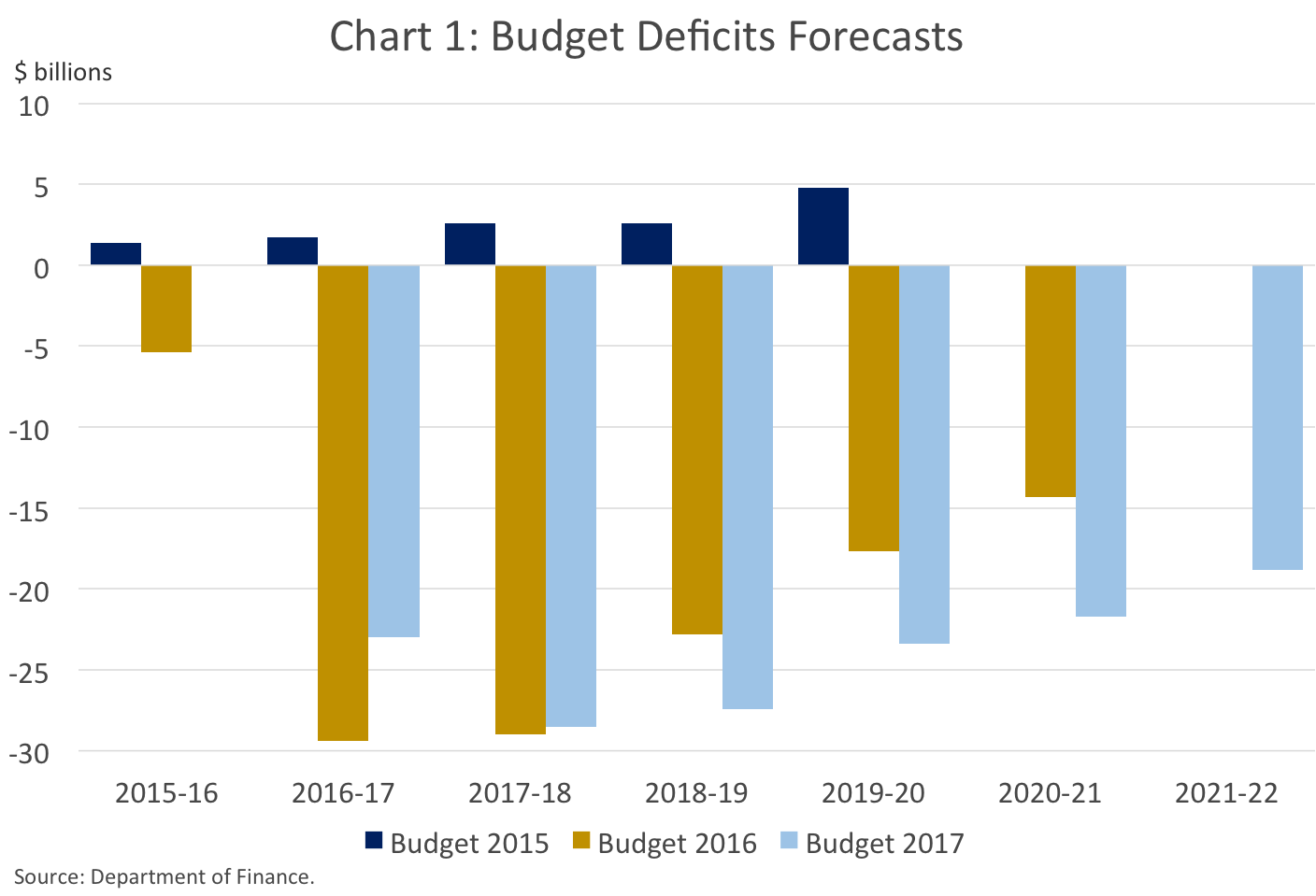 Now, deficits are all the federal government sees on the horizon, out to about 2050 in fact, according to the federal Department of Finance. A smaller expected tax take on the back of a weaker economic forecast and lower overall tax rates (remember the “Middle-Class Tax Cut”) have certainly contributed. But the bulk of the contribution has come from a mammoth increase in new spending. Some of this, to be far, is for infrastructure investment, although this remains a drop in the bucket and has yet to translate into shovels in the ground and dirt being thrown. Instead, much of the increase in spending is for everything other than investment, and are spending items over which the federal government has a great deal of discretion.

And, oh, have they spent. As a result, deficits expected to be in the $15 billion to $30 billion range over the next five years. And the level of federal debt is now expected to be over $110 billion higher in the 2019-20 fiscal year than was the case in Budget 2015 (Chart 2). Compared with the level of debt the federal government had on the books last year, the federal debt would be more than $140 billion higher by fiscal 2021-22. 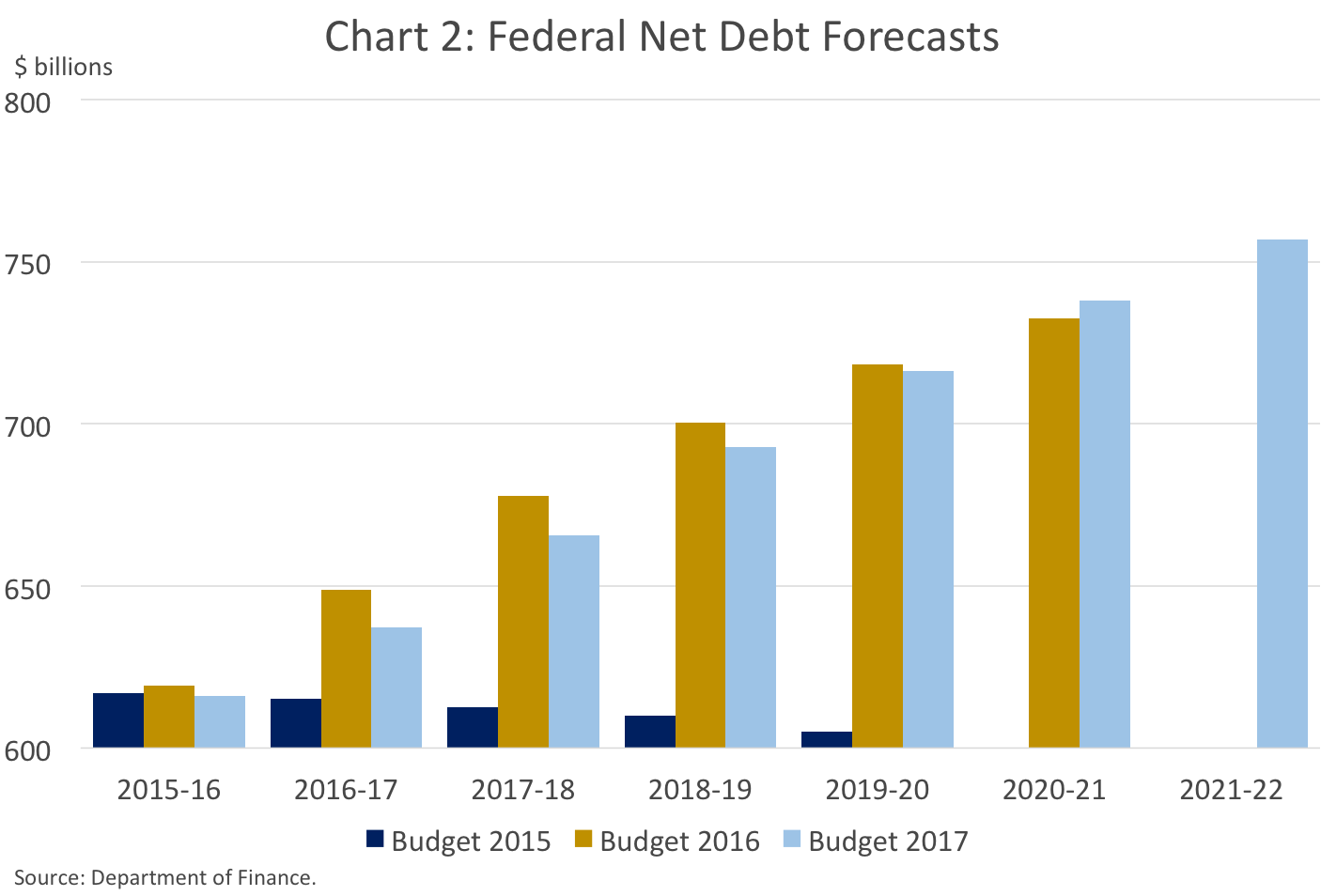 While deficits are expected to continue until after most of us have moved on to the great beyond, we have been given assurances that the debt-to-GDP ratio – the federal debt as a share of the Canadian economy – will not rise beyond its current level. It will, in fact, decline over time (Chart 3), dipping below 31 per cent by fiscal 2021-22. An important pledge, to be sure, although a bit of a tough pill to swallow when compared to the 25 per cent forecast in Budget 2015. Further, this commitment hinges crucially on the economy ticking along at a modest pace and the federal government meeting its spending targets. But the economy often shifts in ways beyond any government’s control or desire. Think of the 2008-09 recession and 2014-15 drop in oil prices. And rarely is the good news as big a surprise as the bad news. When combined with significant uncertainty around the impending trade policy changes coming from south of the border, the risks to the economy seem tilted to the downside over the next few years. As such, the fiscal situation could deteriorate before our eyes, and the debt-to-GDP target along with it, at the slightest whiff of economic weakness relative to the current outlook. 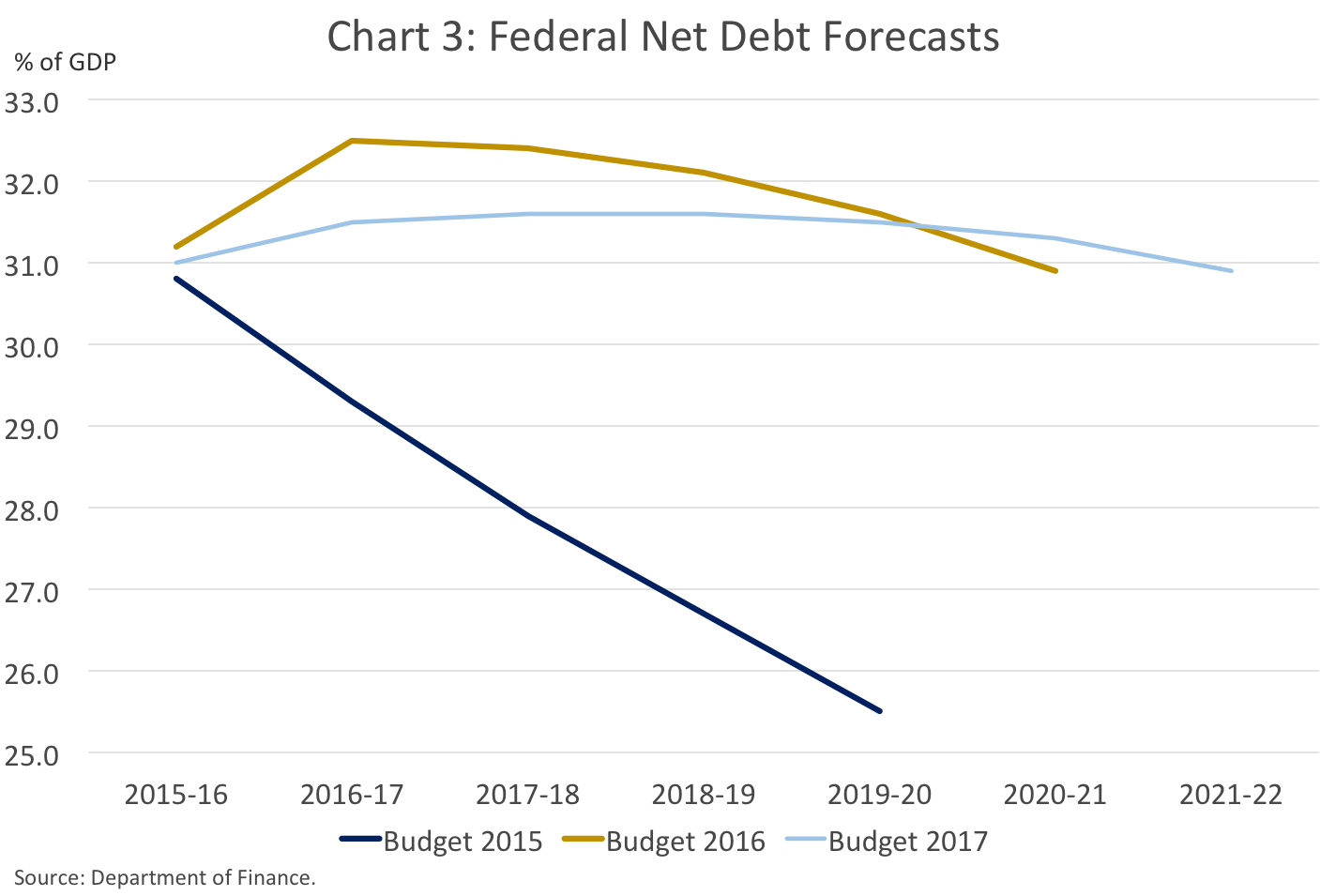 So, with little cash left in the kitty, a “do-nothing” budget could be the best Canadians could have hoped for. The intentions are good, with some modest new spending on innovation and infrastructure, and a more vigorous focus on the impact of policies on Canadian women than we have seen in the past. But a bare cupboard has meant that the much-hyped innovation and skills budget has come up short, while the federal government continues to walk dangerously close to rendering its finances unsustainable. With the ability to better assess and absorb the policy and budgetary changes from the Trump administration, the government’s fall fiscal and economic update may well prove to be more interesting storyline.