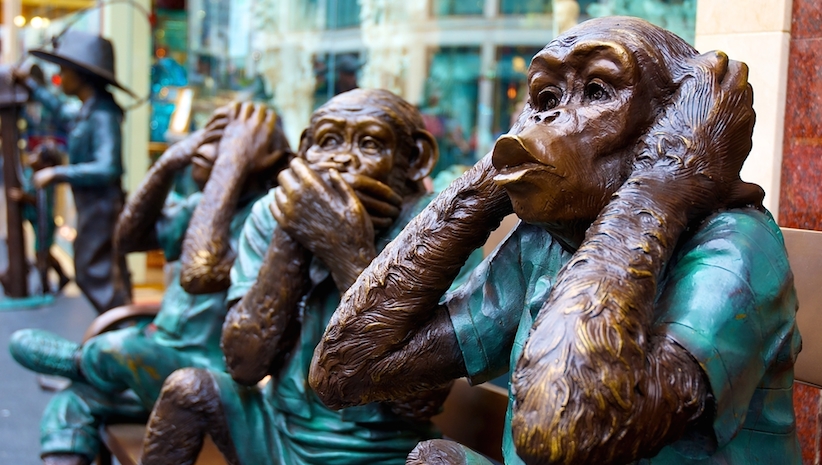 Canada’s hydrocarbon energy sector and, in particular, the growing oil sands sector, has an Achilles’ heel: greenhouse-gas emissions. The energy sector is supposed to have a friend in the Stephen Harper government—the oil-soaked leader of our petrostate, if you ask his most strident opponents—but the government’s consistent failure to address the greenhouse-gas issue with anything other than inflammatory rhetoric, obfuscation or blatant falsehoods, let alone develop coherent policies, is the best ammunition for which opponents of the industry could ask. The more our government avoids the question, responds with unrelated barbs and attacks, or attempts to shield the public from the truth, the more the public will ask questions, the more the public will feel that there are things to be hidden, and the more symbolic oil sands will become. With friends like the Harper government, the oil and gas sector is likely to keep adding enemies.

Canada has committed to a greenhouse-gas emissions reduction to 17 per cent below 2005 levels by 2020, a target which we are, so far as I can tell, universally expected to miss. Barring economic collapse, we’re not expected to come anywhere close and, even with economic collapse, it’s unlikely we’ll get there. The math just doesn’t work. That’s not just my opinion, it’s based on a projection made by Environment Canada, and provided by the minister of the environment to the UN. The model used by Environment Canada is the same model used by Natural Resources Canada for some of their work, as well as by the National Energy Board. It’s been vetted against every other major economy-wide model of emissions and economic growth that make predictions for Canada. None of them, to my knowledge, provides materially different analysis.

Here’s what the Government of Canada concluded in its National Communication to the UN earlier this year about its target, based on analysis using Environment Canada’s model: “Canada . . . committed to reduce its greenhouse-gas emissions to 17 per cent below 2005 levels by 2020. In light of strong economic growth, this could be challenging.” To illustrate the challenge, the minister of the environment included the following figure: 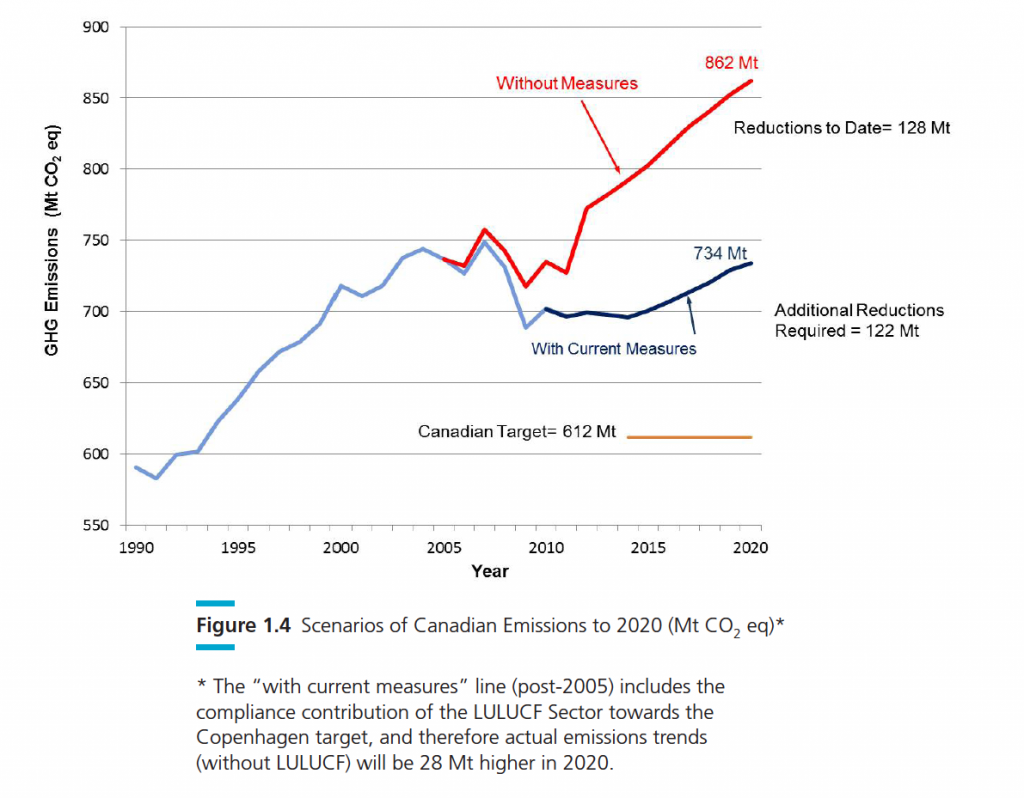 The figure clearly shows that not only are current measures expected to leave Canada short of meeting its target in 2020, our government expects to see emissions heading up in every year between now and then, barring the introduction of new policies. If Environment Canada’s analysis holds true and no new policies are introduced, we’ll find ourselves with emissions 122 Mt greater than the level to which we committed to reduce them in 2020.

How robust are these projections, you might ask? They are based on an economic model, so they are inherently a product of many assumptions, but, mostly, they’re going to be influenced by rates of economic growth and, given the importance of oil sands emissions, changes in oil prices and, again, to any new policies not yet announced. In its most recent quasi-annual Emissions Trends report, Environment Canada tested these emissions projections under a variety of scenarios, including slow economic growth and low oil prices. The lowest of the scenarios, shown in the figure below, still has Canada missing its target by more than the total emissions of the oil sands today, with emissions not declining much below today’s levels between now and 2020. That outcome is also associated with a significant drop in oil sands production, which the National Energy Board forecast would occur in a pricing environment not unlike today’s. If the government expects emissions to drop for those reasons, that would, no doubt, be interesting to those currently seeking approval for pipelines. 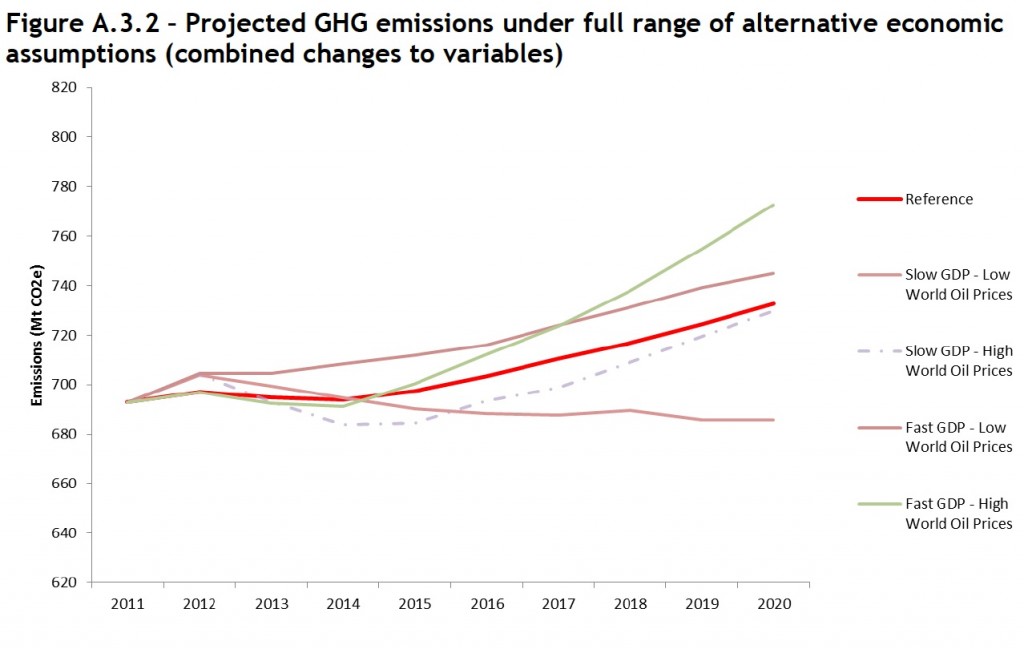 The math doesn’t stop with current projections. It extends to policies, as well. While they’ve received a lot of attention, the oft-discussed oil and gas policies will not likely allow us to reach our targets. There simply isn’t enough time, unless the government were to impose a policy that would significantly constrain growth in the sector and lead to substantial re-fits of existing capital. Let’s look at the numbers. Emissions from the oil sands are expected to grow as production grows, increasing from approximately 60 Mt today to an expected 101 Mt in 2020. That gives you a sense of the policy challenge right there: Even if all new oil sands projects added zero net emissions to the economy, Canada would still miss its Copenhagen target by about 60 Mt. If, by some miracle, you could eliminate all projected oil sands emissions by 2020 without disrupting other sectors, we’d still be on track to miss the target. Of course, neither of these is likely to happen. In fact, new oil sands production is more likely to be more emissions-intensive than existing production on average, owing mostly to the increased share of more emissions-intensive in-situ oil sands production. Low prices and/or infrastructure challenges are likely to slow the rate of growth of oil sands, but also make it more challenging politically for the government to introduce stringent policies that would render oil sands production significantly more costly. Beyond the regulations for the oil and gas sector, the government has not outlined any additional sectors for which it plans stringent regulation, and has announced no plans to revisit other sectors.

On Global Television yesterday afternoon, the parliamentary secretary for the environment, Colin Carrie, suggested that Canada not being on track to meet its targets was simply a matter of opinion. In a sense, he’s right: The stated opinion of the government is that Canada is not on track to meet its targets. This opinion was submitted to the United Nations in an official disclosure, supported by extensive, publicly available economic analysis performed by the department responsible for Canada’s greenhouse-gas emissions inventories and, for most policies that might be imposed to reduce them, this opinion was validated by the office of the Auditor General, and this analysis has not, to my knowledge, been refuted by any competing projection in a material way.

Perhaps, as my colleague Aaron Wherry suggests, the government is privy to analysis that demonstrates that their own projections are not accurate. If so, they should table it. Perhaps the government is expecting much lower oil production than currently forecast? If so, that wasn’t reflected in the most recent fiscal update. Perhaps the government plans very stringent policies for oil and gas? Perhaps the government is expecting that the whole climate change issue will go away, and that it’s just a matter of a few scientists’ soon-to-be-refuted opinions? It would do them well to say so, whatever it is. Canada’s energy industry is facing mounting criticism at home and abroad, new infrastructure critical for optimizing the value of our resources is stalled at every turn, and the our key ally in global climate change negotiations, the U.S., now has an emissions trajectory and opening bargaining position so different from ours as to make harmonized targets impossible. Over the next 13 months, in the lead-up to UN climate negotiations in Paris, Canadians deserve accurate information from their government. At the same time, Canada’s energy industry, as well as the western provinces so dependent on oil and gas resource wealth, must demand that our government take this problem seriously. That, in my opinion, would start with being prepared to answer the most basic of questions about our country’s emissions trajectory and the potential impact of future policies.