Why banks want saving from themselves

It’s a sign of the insanity in our housing-obsessed, household debt-driven economy that bankers want government to restrain banks.

In about a month, Ed Clark, the CEO of TD Bank, will retire, bidding adieu to the company’s familiar green armchair for the last time. He’s had an impressive run. As the one-time head of Canada Trust, Clark engineered what was essentially a reverse takeover of the much larger Toronto-Dominion Bank after it bought Canada Trust in 2000. And, under his watch, TD recently catapulted past the Royal Bank of Canada to become the largest financial institution in the country by total assets, which, as of last quarter, stood at a staggering $922 billion. So the man knows banking. And, this being Canada, where a handful of Goliaths dominate the industry, thanks to government-decreed oligopoly, he’s acutely familiar with the unseemly tango bankers and politicians are forever locked into.

Which is why it was so informative when Clark voiced concerns recently about the fragility of household finances in light of ultra-low interest rates and the easy access to mortgage credit. “Where these issues have been dealt with successfully is governments who lay out a framework for an industry,” he told the Canadian Press last week. Individual banks, he said, aren’t able to “change the world . . . It’s not possible in a competitive capital system.”

To paraphrase Clark, it’s cutthroat out there, and no bank can afford to lose any lending business to rivals, even if those rivals take undue risks by issuing loans to people who can’t really afford them. As such, it’s necessary for government to tighten lending rules to keep the industry from rocketing out of control.

Or, to distill Clark’s message further still: Stop us before we hurt ourselves.

It’s a measure of the insanity gripping Canada’s real-estate-obsessed, household-debt-driven economy that it’s come to this: bankers asking government to impose restraint on banks. Just as telling, though, has been the response from government, namely Finance Minister Joe Oliver, who, ultimately, holds the levers over any further tightening, and who thinks everything is just peachy. “We’re looking at things,” he said this week, “but we’re not going to be doing anything dramatic. We don’t see the need for it.”

Related: Our addiction to housing debt in 11 charts

It shouldn’t be a surprise that Oliver is hesitant to intervene. Real estate has been one of the few consistent bright spots in the economy over the past five years. With job growth stalling, the economy remains dangerously reliant on people borrowing money to buy homes and fill them with stuff. As the chart below shows, real estate has surpassed manufacturing in its importance to the economy and left the resource sector far behind. 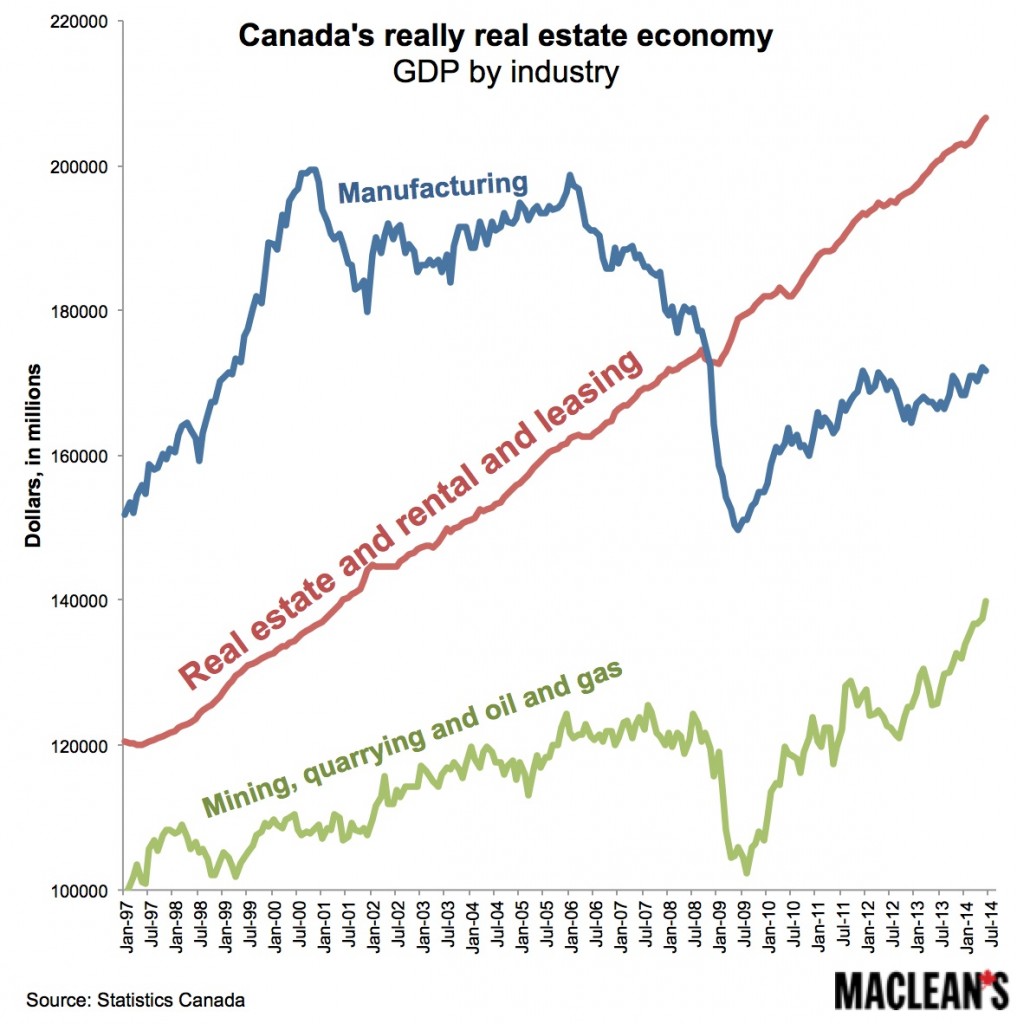 The government will also say it’s already taken steps to dampen the housing market, such as capping amortization periods at 25 years and nixing mortgage insurance for second homes, though none of these measures has done anything to temper soaring house prices. And, while the growth in household debt has indeed slowed from the torrid double-digit increases witnessed immediately after the recession, it still grew faster than disposable incomes did last quarter.

We’re long past the point of saying we shouldn’t have gotten ourselves into this mess in the first place. But we shouldn’t have. Successive governments used the Canada Mortgage and Housing Corporation—the Crown corporation that insures lenders against losses—as an economy-boosting plaything, moral hazard be damned.

To his credit, CMHC’s current boss, Evan Siddall, is far more open than his predecessor ever was about how the agency views the market. He’s also mused about introducing some form of deductible that lenders would have to pay on mortgage insurance claims. In theory, that would compel lenders to think twice about the quality of the mortgages they’re taking on, lest they, gasp, be on the hook, should their loans go bad. (It was that possibility that Oliver was responding to when he assured the housing market he has no plans to “do anything precipitous.”)

Yet Siddall remains firmly in the “What, me worry?” camp. Citing CMHC’s housing market analysis tool, he said last week that “despite some overvaluation, there are no immediate problematic housing market conditions at the national level.”

Related: Take the Canada-U.S. housing bubble quiz and try to tell which country the bubble-denial quotes refer to.

What we’re left with is our bizarro real estate world, where the only detached home in Vancouver listed for less than $600,000 is a houseboat. (Don’t forget to mention the $1,050 monthly moorage fee when meeting your banker for that mortgage.)

The debate over whether, and to what extent, the government should intervene in the mortgage lending business is all the more pressing, now it’s clear just how long the Bank of Canada intends to keep interest rates low. On Monday, Carolyn Wilkins, the bank’s deputy governor, said that even after the economy returns to full capacity, growth is expected to be slow and, as such, the so-called neutral interest rate will be roughly 1.5 percentage points lower than it was before the financial crisis.

In other words, cheap debt is here to stay. So banks, with their downside exposure limited, will keep on finding ways to dish out loans, questionable or not. At least until someone rescues them from themselves.