Is Canada's one per cent really in retreat?

Why has the income share at the top fallen in Canada, even as it continues to increase in the US?

Statistics Canada’s latest release on high-income trends is a bit of a surprise: The share of income accruing to the top one per cent of earners continued to fall in 2012, as it has done since 2006. A continuation of a trend shouldn’t be a surprise, except that most observers have been expecting the top income share to rebound as the recovery takes hold, as has already been the case south of the border. In the U.S., the share of income going to the top one per cent increased sharply in 2012 and more than recovered the ground lost during the recession:

Earners at the very top of the income distribution have done very, very well over the past 30 years. But it turns out that all of those gains happened before 2000. Since then, gains in income have been broadly based, and incomes at the very top have actually fallen:

This leads us to the question: Why? Why has the income share at the top fallen in Canada, even as it continues to increase in the U.S.?

(Much of the rest of this post is based on a seminar I gave at the University of Toronto’s Centre for Ethics last year. You can see the slides here.)

The idea behind the exchange rate is that top (anglophone) income earners in Canada—and in other English-speaking countries—can credibly use salaries on offer in the United States as leverage to bargain for higher salaries. Readers whose memories go back to the 1990s will remember any number of stories about the “brain drain”: As the Canadian dollar depreciated, the gap between the salaries on offer here and those on offer in the U.S.—expressed in Canadian-dollar terms—served as an incentive to move to the U.S. in search of higher incomes. The number of Canadian high earners who actually moved to the U.S. turned out to be too small to measure with any degree of accuracy, but the anecdotes were enough to extract raises to (partially) match the higher U.S. salaries. Indeed, the surge in incomes at the top is a phenomenon exclusive to the “anglosphere”: The U.S., the U.K., Canada, Australia and New Zealand.

Kevin Milligan posted a couple of graphs on Twitter, charting average incomes of top earners in Canada and the U.S. (also available here). When you correct for the exchange rate, movements in Canadian and U.S. top incomes look quite similar: 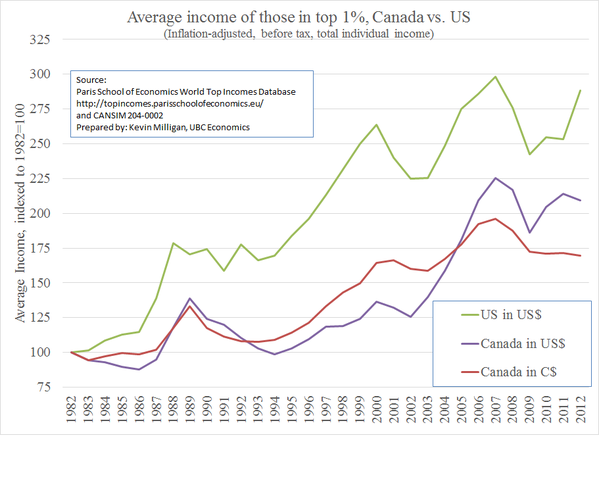 Here’s a graph of the same data, but with the U.S. salaries expressed in terms of Canadian dollars:

U.S. top salaries have always been higher than in Canada, but the gap widened sharply as the Canadian dollar depreciated—and as top U.S. salaries increased. That widening gap appears to have been used as leverage for higher salaries in Canada. But, once the Canadian dollar started to appreciate, the gap between Canadian salaries and U.S. salaries (expressed in Canadian-dollar terms) narrowed again, thus removing much of that leverage. As a result, income gains at the top have been relatively modest since 2001 or so.

The story doesn’t end here, of course: The recent depreciation in the value of the Canadian dollar has produced an uptick in the Canadian value of U.S. salaries. If this continues—and if U.S. top incomes continue to increase—then top earners in Canada may start using that outside option as leverage in order to extract significant increases in their salaries.

After all, they’ve done it before.

FILED UNDER: top one percent