Millions want to see the Tragically Hip — but are being beaten by resellers, flipping tickets at a mark-up. But those prices aren't as inflated as you think.

On Friday at 10 a.m. general tickets for the Tragically Hip’s final tour will go on sale. On Friday at 10:01 a.m., many of those same tickets will inevitably pop up on resale websites like StubHub, accompanied by cries of outrage and resentment from Hip fans who were unable to score tickets of their own.

The news that Hip frontman Gord Downie has terminal cancer may have shocked the band’s multitude of fans, and Hip Nation was certainly surprised to learn the band would mount one final cross-Canada tour despite Downie’s illness. But the bitter debate over scalpers and ticket resale sites, which first flared up on Monday when thousands of presale tickets made available to members of the Hip’s online fan club were snatched up by scalpers, was inevitable from the moment the tour was announced.

Managed to get 2 tickets in the Tragically Hip presale but it was a close call. 257 tix available on Stubhub for 5x face value. Disgusting.

Good system we got.

$1,000? Try closer to $6,000. On Tuesday, that was the most expensive resale price for a ticket to the Hip’s first show at Toronto’s Air Canada Centre.

Now here’s the thing—anyone who actually pays that price is a fool. As for the system of online resale marketplaces, an economist will tell you it’s actually pretty good. At least it’s certainly better than the alternatives.

First, let’s deal with those insanely high resale prices that have received so much attention. Here’s a picture from the StubHub website showing the view you’d get if you bought a $5,600 ticket in balcony 305, row 2. 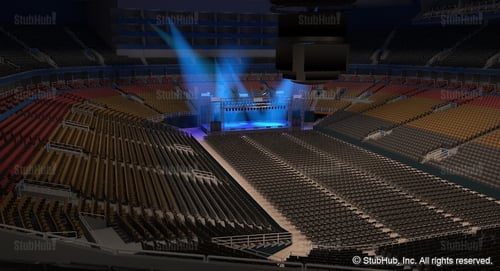 Now here’s the view from Balcony 305, row 6, another seat for sale on StubHub for the exact same show.

You’ll notice StubHub uses the same photo. That’s because the two seats offer nearly identical views of the stage. Yet that second seat can be had on the resale site for $127, a saving of 98 per cent.

Here’s a more comprehensive list of outrageously priced resale tickets available on StubHub from earlier this week, and what a potential buyer with more common sense could find with minimal searching.

Those scalpers selling tickets at lunatic prices are hoping they might find a few frantic and gullible buyers—the type with a soft spot for Florida swampland. In reality, of the 800 tickets for that one Toronto show currently available on StubHub, roughly 80 per cent are priced at $250 or less. So we can dispel with the idea that diehard Hip fans will have to pay thousands of dollars to see the band one last time.

Still, $250 is considerably more than the Hip sold the tickets for in the first place—the original sale price ranged from $56 to $166 depending on the seat. What gives?

Bot-wielding scalpers have emerged as the consensus villain in all this. Critics have pointed to a recent report from New York Attorney General Eric Schneiderman that described event ticketing as a “fixed game.” The report found evidence of third-party brokers deploying illegal software to snap up tickets before fans ever have a chance. Those tickets then wind up on resale sites like StubHub and TicketsNow (the latter is owned by Ticketmaster) marked up by an average of 49 per cent.

Related: Many Tragically Hip fans disappointed as concert tickets sell out in minutes

But are the ticket prices inflated, or just more representative of what the market is really willing to pay? It certainly appears the Hip and the band’s concert promoters deeply underpriced tickets for this tour, which presented an incentive for scalpers to grab as many as they could. The band has since added four more shows (bringing the total to 15) to meet demand, but there’s an obviously unfortunate limit to how many more performances the band can put on. The real market price for Hip tickets is likely at least double what the band originally asked for (or roughly what many of the tickets are selling for on StubHub) if not more.

After adjusting for the effects of inflation on the value of the dollar, lower-end tickets to the Man Machine Poem tour are roughly the same as tickets to some Hip concerts in the early 1990s, despite the fact the average price of concert tickets has risen far faster than inflation over the last 20 years. This chart is from a presentation by Alan Krueger, former chair of the Whitehouse Council of Economic Advisers, called Rock and Roll, Economics, and Rebuilding the Middle Class, but the trend is much the same in Canada. 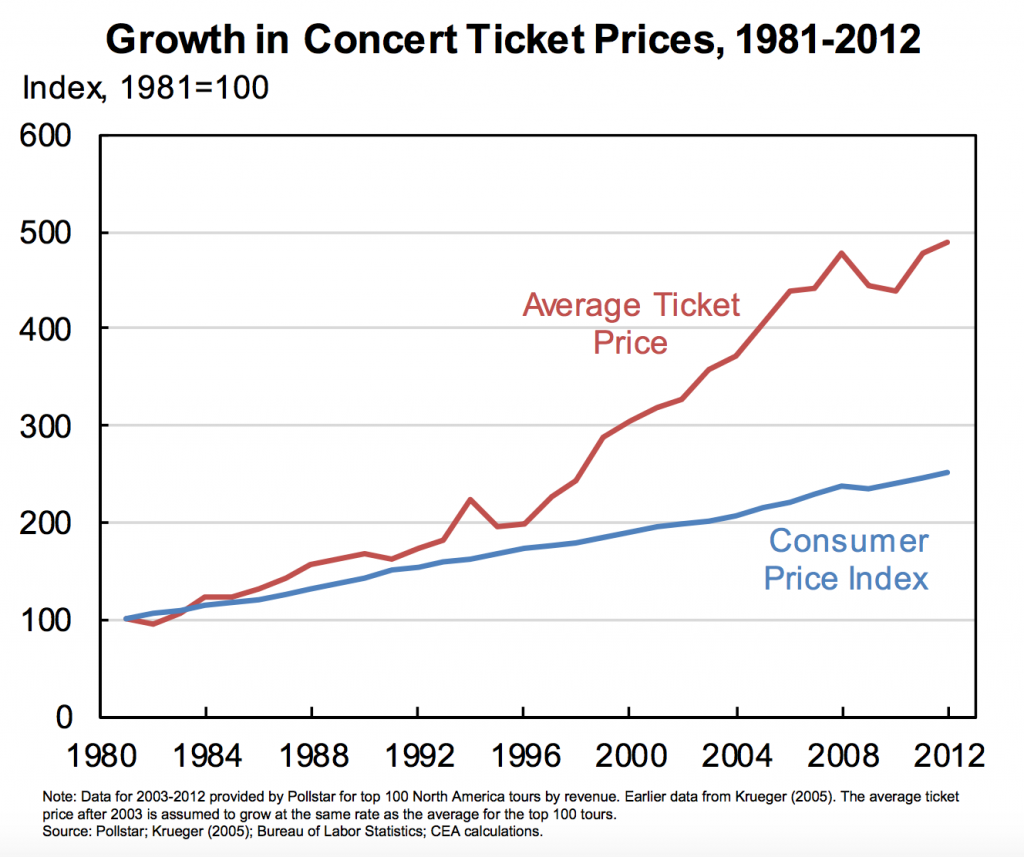 But guess what? The kids and young adults who flocked to those early concerts now want desperately to be there for Downie’s last-ever performances. The difference is they’re in their 40s and 50s now, with bigger paycheques and three or four credit cards to their name. Demographics is a major factor in concert-ticket hyperinflation, especially when it involves nostalgia acts like the Hip.

Of course, had the band set ticket prices closer to their real market value in the first place, they would have angered fans and been accused of capitalizing on Downie’s illness, which is exactly the criticism being levelled against scalpers reselling the tickets for their proper value.

Live music fans have always had a tolerate-loathe relationship with scalpers. In the time before the Internet and online resale sites, it was still bloody difficult to score tickets to extremely popular events. Only back then, if you didn’t manage to snag tickets when they went on sale, you had to take a chance by buying them from shady characters lurking around outside venues. It was also a lot harder to know what was a fair price to pay for scalped tickets.

The example above, of virtually identical tickets to the same show being sold for as high as $1,400 and as low $172, is an example of the transparency of online secondary market at work. Who would pay the higher price when the lower price is available? Online resale sites also offer refund and replacement guarantees against fake tickets that are a vast improvement over what it was like in the past.

Is there a better way? Many a jurisdiction has tried to outlaw scalpers and realized the futility of their efforts. Ontario had laws on its books for decades that prohibited the resale of tickets for more than their advertised value, yet they were costly to enforce and did nothing to deter the practice. (The province changed its ticket speculation act last year to allow resales at higher prices but requiring safeguards against fraud.)

Scalpers thrive when there’s a large gap between the face value of tickets and what people are willing to pay. Selling all the tickets directly through online auctions in the first place would erase that gap. However, it wouldn’t result in lower ticket prices. At best, fans who miss out would have the consolation of knowing the money went to the performers, and not to scalpers.

The simple fact is that there are millions of Hip fans desperate to be part of this historic moment in person. For those who score tickets at face value: congratulations. For the rest of us, we may just have to pay up. It will be worth it.