A Chesterman Beach home in Tofino, B.C., listed for $7.6 million, is shown on Thursday, June 9, 2005. High house prices in the Vancouver Island town are driving some residents out. One realtor said 12 Tofino residents have bought Ucluelet properties in the past two years, and five more are looking. (CP PHOTO/Keven Drews)

The international media have finally clued in to the wackiness on Canada’s west coast, otherwise known as the Vancouver real estate market. Last month Bloomberg noted that when compared to median household incomes Vancouver homes are more expensive than even New York. The story linked soaring prices to the influx of wealthy buyers from mainland China. Today the Wall Street Journal retraces the exact same material. The warning in both pieces is clear: Vancouver’s housing market has become disconnected from reality and is primed to crash. 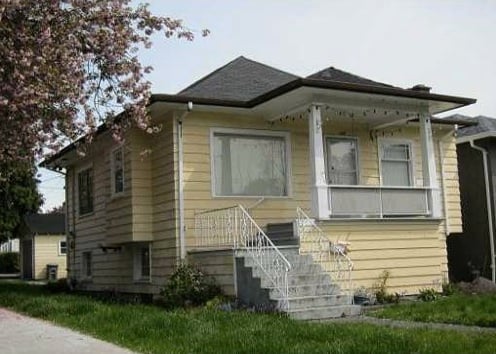 This little 3 bedroom, 1 bathroom bungalow in Vancouver is priced at $1.5 million. The listing suggests buyers just tear it down and build a new home.

This is a well worn theme for many Canadian reporters. Here at Maclean’s we’ve reached the same conclusion several times going back to 2008, and, admittedly, we’ve been proven fully and completely wrong. I still think prices here in Vancouver are nuts, but each day as I walk to work past the high-end coffee shops and panhandlers I see more “For Sale” signs going up, along with plenty of “Sold” stickers, too.

But here’s the thing. The real threat to Vancouver isn’t that the housing market might crash. That’s happened here before. It undoubtedly will happen again. Such is the boom & bust nature of real estate in Lotusland.

Far more insidious is the impact housing unaffordability is having on employers and the broader economy. You hear stories of smart, young people leaving for jobs elsewhere. At the same time smart, young people from elsewhere aren’t coming here for jobs. The price of real estate and cost of living are too high, while pay is simply too low relative to other parts of the country. Business in Vancouver, a local newsweekly, delves into the dilemma in its latest issue with the story “Home truths hurt talent search.” (You need a subscription to read the story online but here’s the lead.)

To take a job in Vancouver, Calgary-based senior information management consultant Joey Roa would have to give up living in a 3,000-square-foot house just outside the downtown core. He’d have to give up his 20-minute on-foot commute for what he figures would be “a considerable drive, at best.” He’d have to start paying provincial tax. He’d see his current $1.15-per-litre gas prices rise to what he terms Vancouver’s “insane” pump prices.

And with Vancouver’s salaries failing to keep pace with Calgary’s oil-rich pay scale, he’d likely be looking at a pay cut to boot.

Needless to say Roa is staying put in Calgary. He’s turned down several offers from head hunters in Vancouver, and the BIV story includes recruiters who are having trouble luring educated and experienced workers to the city. In short, Vancouver is increasingly being seen as a no-go zone for top talent.

This is very bad. Worse arguably than if house prices crashed. As Vancouver develops a reputation as a place where only the uber-rich can afford to buy property, it could seriously undermine the economy.  Fewer workers living here and earning good pay means a weaker income tax base for the province (though the city is benefiting from property taxes) not to mention less people with the means to shop, eat out and support local businesses and the arts. In addition, if you don’t have a vibrant and enterprising population, chances are new companies won’t get started. Coupled with the scarcity and high-costs of commercial real estate, more companies are likely to move their head offices away. Earlier this month mining giant BHP Billiton shifted its Canadian head offices from Vancouver, a self-proclaimed global mining capital, to Saskatchewan. Who knows how many businesses decided not to come in the first place.

Above all, if the economy is left weakened by departing head offices and a scarcity of talented workers, it will leave Vancouver even more vulnerable to that housing crash when it eventually comes. In economics Dutch Disease refers to countries that are overly dependent on their natural resources at the expense of other industries. Only here the culprit is real estate. Call it the Vancouver Virus.