The view from the top is spectacular, but it never lasts. Suddenly and without warning, you drop. Faster and faster you fall, screaming, heart racing, and wishing you were anywhere but here. But when you finally reach the bottom, what do you do? You don’t get off. You can’t fight the urge. You can’t wait to go back up. It’s a rush! It’s a rollercoaster! And it’s how Alberta budgets.

Alberta spends more than most, but taxes less. It’s an easy balancing act when oil prices are high, but impossible when they are low. Despite much posturing by politicians over the years, no one—neither past PC governments nor the current NDP—seems willing to move past our historic reliance on volatile resource revenues.

That’s unfortunate, and it’s a missed opportunity. After all, the smart time to get off a rollercoaster is when it’s at the bottom. And that’s today. 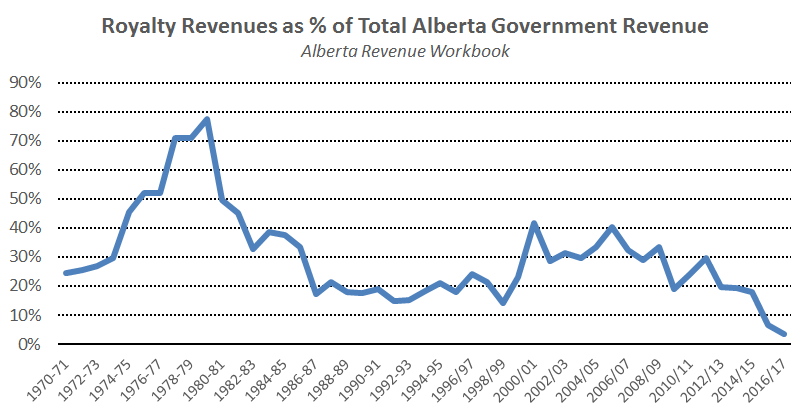 Currently, royalties account for only about three cents for every dollar raised by the government. This is down from an historic average of closer to one-third. But Alberta’s new government, and their recently released Budget 2016, punts on that tough decision and misses a prime opportunity.

Let’s first take a step back and review the numbers. The immediate consequence of low oil is clear: deficits. And very large and persistent ones at that. Budget 2016 forecasts deficits on the order of $10 billion over the next two years, and $8 billion after that. Here’s how it breaks down. 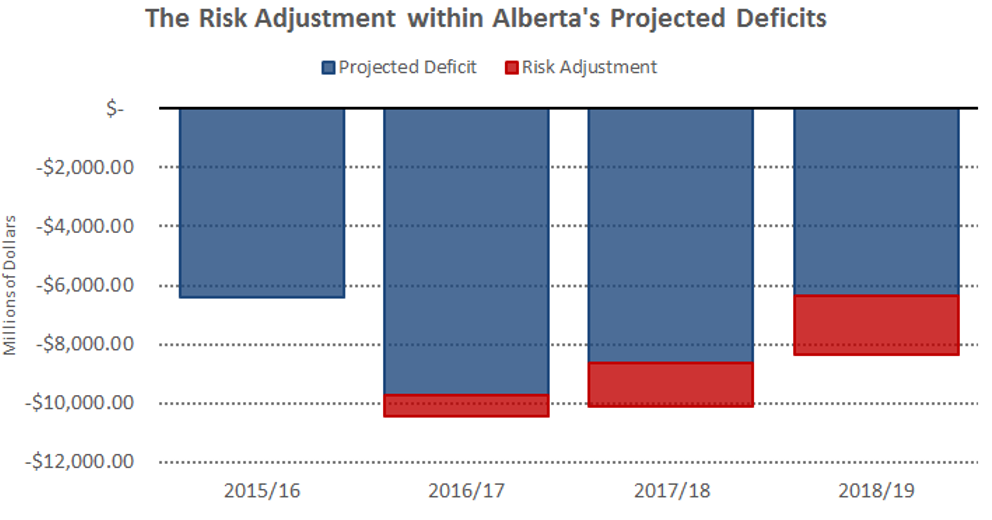 The deficits are deliberately and prudently increased through a “risk adjustment,” which essentially reflects the possibility that future oil price assumptions come in lower than expected.

For later years, the budget is silent. Projections stop at 2019, though Alberta’s Finance Minister Joe Ceci suggested we should probably expect deficits until 2024—unless oil prices return, of course. Roughly speaking, he’s right.

As a quick approximation, let’s presume government revenues grow anywhere between four per cent and six per cent past 2019. Further presume the government grows total spending at 2.5 per cent per year (which, incidentally, would be far slower than the 4.3 per cent average spending growth over the next three fiscal years). I plot the result below, with the grey shaded region representing the various revenue growth scenarios. 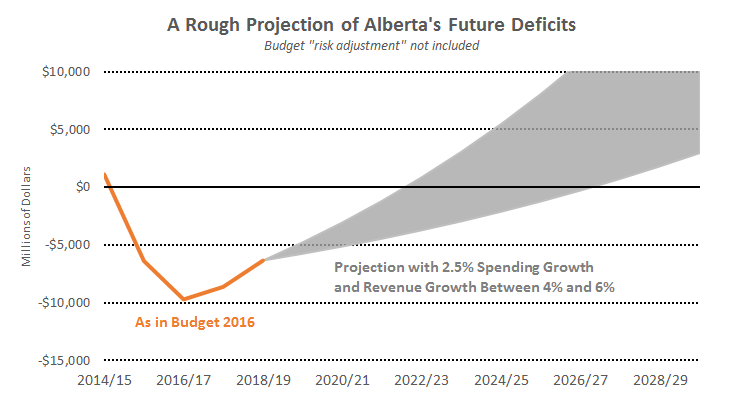 Roughly speaking, that’s somewhere between $35 billion to $40 billion in deficits before we balance and a decrease of Alberta’s financial net worth (our “net financial assets”) of perhaps $55 billion to $60 billion.

These are big numbers.

The problem is that future revenue increases depend (in part) on rising royalty revenues. The government expects resource revenues to exceed $4.2 billion by 2018-19 (up from less than $1.4 billion today). If royalties don’t grow, the deficit wouldn’t shrink one bit! If royalties remain at their current level for 2017-18 and 2018-19, the deficits would exceed $11 billion.

If royalties stay at their current level forever, it will be many years before we balance. To see this, turn back in time to Jim Prentice’s March 2015 budget. There, the government presented a 10-year revenue forecast. Long-run non-resource revenues were expected to grow at just over 3.8 per cent per year in the out years. Let’s call that a “normal” non-resource revenue growth for the province. If we hold royalties at their current $1.4 billion level, and grow other revenues at a 3.8 per cent rate beyond 2019 (and use the budget numbers up to 2019), then if spending keeps growing we might not balance until well into the 2030s. 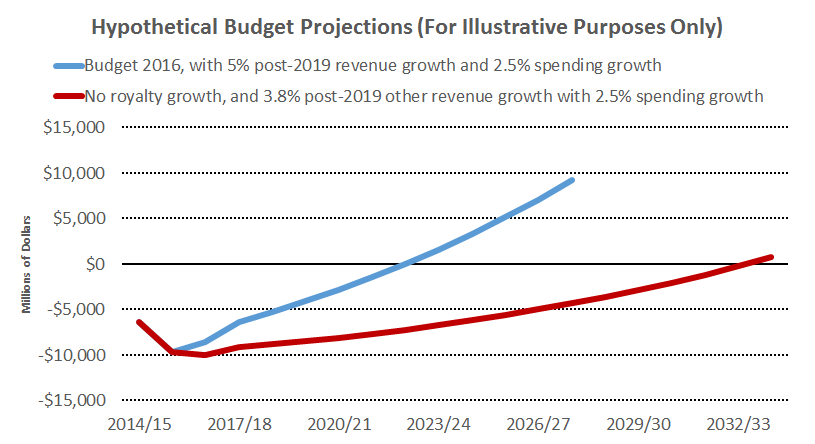 Of course, this is just to illustrate that royalty revenues matter. It abstracts from many things. The point is that revenues will likely grow much slower if we don’t rely on royalties.

Is a 2.5 per cent spending growth rate reasonable to assume? Well, population plus inflation is expected to grow in excess of three per cent for many decades to come. Statistics Canada’s “low population growth scenario” has population growth in Alberta exceeding one per cent every year from now until nearly 2040. So, for spending to grow at only 2.5 per cent is actually a reduction in real per-capita spending.

The current government also plans to increase total spending by an average of 4.3 per cent over the budget years. This is much higher than population plus inflation.

Of course, some of that increased spending won’t continue, as it is associated with the Climate Leadership Plan that spends most of the carbon tax revenue raised. But, even netting out those spending items, growth in government spending averages 2.8 per cent to 2019.

So, roughly speaking, the budget’s spending growth and falling deficit rest heavily on growing royalty revenues. Without such royalty growth, and without new sources of revenues, such rates of spending increases are a cause for concern.

Concern, yes; panic, no. Nothing I said is an indictment of the spending items. If they are worthy of spending money on, great, pay for them with money raised through efficient forms of taxation such as an HST.

There is also no cause for short-term, knee-jerk reactions. Alberta’s fiscal situation is in very good shape. Projecting out Alberta’s net-debt to GDP ratio, for example, shows we remain well below that of British Columbia—the province with the best financial health and lowest borrowing rates. (Warning: this projection is even less precise than the one for deficits, since we must also make assumptions about future nominal GDP growth, which I assume ranges from four per cent to six per cent, and is captured in the shaded region below, along with revenue. There are some other assumptions too. But, regardless of those assumptions, Alberta is without a doubt in a very strong position.) 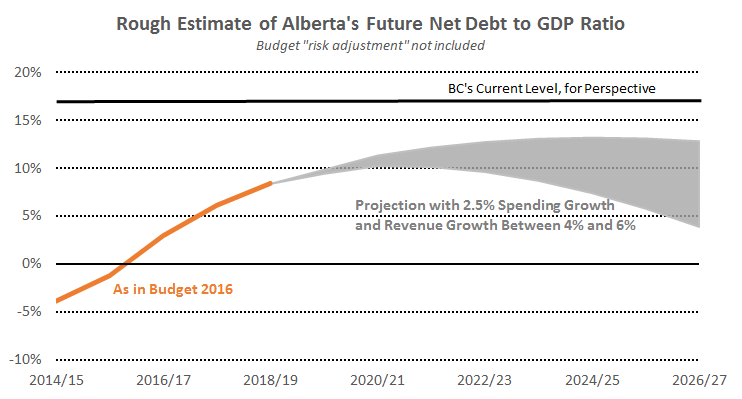 We have time to consider alternative choices. But we must start considering such choices now.

The first option, seemingly the government’s current choice, is to do nothing. Grow spending at a rate less than that of revenue, and wait. Don’t get me wrong, given our strong fiscal position, this is a defensible choice. But it’s a choice that should be made clear to Albertans.

A better alternative is to start planning for the future. We can plan for future tax increases, and restrain the growth of spending (not cut, but grow much slower than we are), and solve our deficit problem sustainably. There’s no need to raise taxes now or cut spending now, in a time of less than stellar economic performance, but we can certainly plan for the future.

How should we raise revenue? If you value the economy, the answer is clear: a sales tax—an HST. As an added bonus, it’s a very stable source of government revenue. Here’s some recent estimates from a recent paper by University of Calgary economist Jack Mintz and co-author Philip Bazel. They recommend a growth-enhancing tax shift, towards consumption taxes and away from royalties and highly distortionary corporate income taxes. 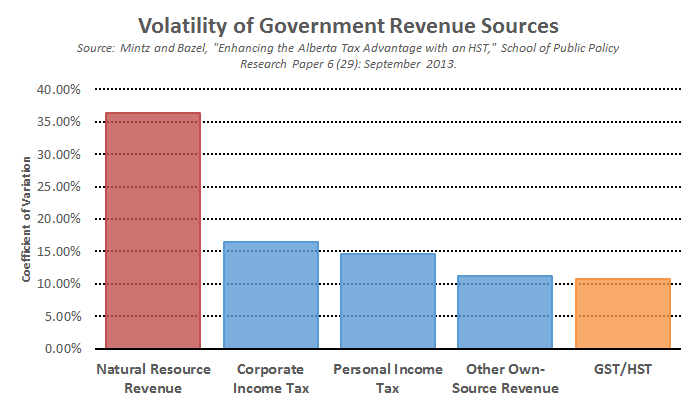 How should we lower spending? I’ve explored some options in a previous post here. Spoiler: our health care system needs some serious attention.

By shifting to less volatile revenue sources and bring our high levels of spending into line, Alberta can finally get off the rollercoaster we’ve been on for many (many) years.

It’s easier to make this transition now, while royalties are low, than to wait.

We’ll become reliant on them again before you know it.

The first step in any recovery, is recognizing you have a problem.