U.S. Trade Representative Robert Lighthizer couldn't find too many redeeming qualities of the trade deal on the books. Watch for tough negotiations to follow. 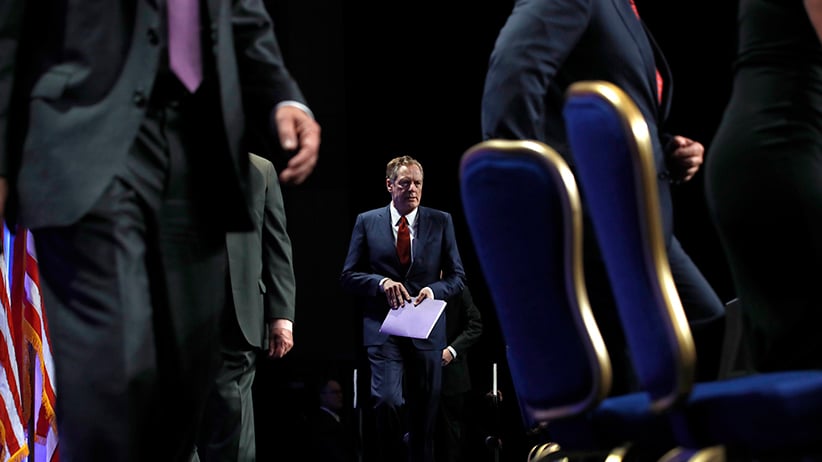 In case the 17-page, 4,200-word negotiating plan wasn’t evidence enough, we now have confirmation from Donald Trump’s top trade negotiator that the president misspoke earlier this year when he said the U.S.’s economic relationship with Canada required only a little tweaking.

U.S. Trade Representative Robert Lighthizer is said to be a severe type, and he certainly came off as such at the semi-ceremonial start of the renegotiation of the North American Free Trade Agreement in Washington on August 16. After letting his Canadian and Mexican counterparts speak, Lighthizer delivered brusque remarks that will trouble many Canadian and Mexican special interests, if not the negotiators themselves.

The contrast with Canadian Foreign Affairs Minister Chrystia Freeland couldn’t have been greater. Freeland began her presentation by holding up laser-printed photographs of American and Mexican firefighters who were on their way to British Columbia to help that province with the infernos raging in the interior. She said the pictures serve as reminders of the unique bond that North America forged with its free-trade agreement, and will guide her approach to negotiations over the weeks and months ahead.

Lighthizer struggled to find good things to say about NAFTA. He acknowledged that American farmers have done well by the agreement, as Canada and Mexico are now their largest export markets. And he admitted that Americans who live along the northern and souther borders have deep connections with their international neighbours.

“I’ve always thought that communities along our borders have a particular equity in this agreement,” said Lighthizer. “In many cases their lives, businesses, and families are very much on both sides of the dividing line. They too are hardworking men and women trying to raise a families and accumulate wealth. We must keep their interests paramount.”

“But for countless Americans, this agreement has failed.”

There is also the domestic audience to consider, and therefore pressure to assure the “America First” movement that Trump will give no quarter to those who have been using NAFTA to rob the U.S. of good-paying factory jobs for the past two decades. Third: with the world debating whether the U.S. president is a neo-Nazi sympathizer, there might have been a desire at the White House to turn up the volume in another room to drown out the noise from the Oval Office.

Still, there is no longer any denying that the Trump administration wants a major reworking of NAFTA. While the Canadian and the Mexican sides expressed their excitement for the chance to “update” the 23-year-old agreement for the Amazon age, Lighthizer was talking like a demolition man. His big concession at this stage is agreeing to leave the foundation and the support beams in place.

“The views of the president about NAFTA, which I completely share, are well known,” Lighthizer said. “I want to be clear that he is not interested in a mere tweaking of a few provisions and a couple of updated chapters. We feel that NAFTA has fundamentally failed many, many Americans and needs major improvement.”

America’s trade representative offered a “few” examples of the changes the U.S. wants to make. There were actually seven: the “huge” deficits between the U.S. and its partners must end; automobiles and other goods made in North America must include a “substantial” increase in U.S. content; labour provisions should be made “as strong as possible”; new rules to prohibit currency manipulation; a revised system of dispute resolution that respects “our national sovereignty and our democratic processes;” a way to keep third parties from sneaking cheap goods into the U.S. through the back doors of Canada and Mexico; and “equal access” for Americans to government procurement and agriculture.

READ MORE: Why NAFTA’s Chapter 19 is worth fighting for

There’s more, Lighthizer promised; he just wanted to give his counterparts and the rest of us an idea of Trump’s ambitions. Since those ambitions change regularly, it is impossible to predict whether Lighthizer’s threats will force Canada and Mexico to go to places they would prefer to avoid, or whether in a few months Trump will take whatever has been agreed at that stage and call it a “Great Win for America!”

Here’s one thing we can say: there is a lot of interest in these talks, especially in Canada and North America. At least three dozen reporters showed up for Day One of the talks, suggesting Trump has bumped travel budgets at the continent’s struggling news organizations. (There were just as many reporters shooting themselves on smartphones as there were actual television cameras, however.) There were even more lobbyists, a sign of the sort of money that is at stake.

All those observers witnessed a wide rhetorical gap between the biggest player in NAFTA and its two satellite economies.

Freeland and Guajardo spoke of an historic agreement that has worked well, while Lighthizer took their numbers and high-minded arguments and crushed them under his foot. Particularly striking was his dismissal of the Trudeau government’s argument that trade between Canada and the U.S. is balanced. “In recent years, we have seen some improvement in our trade balance with Canada,” Lighthizer said. “But over the last 10 years, our deficit in goods has exceeded $365 billion.”

This is what is facing Canadian and Mexican negotiators: two decades of grievances and scapegoating that won’t be assuaged by recent shifts in the flow of goods and services and photographs of brave firefighters. Trump assembled a team of trade negotiators that is as skeptical about the benefits of NAFTA as he is. And now, after months of anticipation and preparation, they finally have their sledgehammers in hand. The formalities concluded in barely half an hour, at which point Lighthizer directed officials to make their ways to their assigned rooms to begin the first round of negotiations, which was scheduled to conclude on the weekend. More rounds will follow, in all three countries, and there is little reason to think any of it will be much fun.

“Thank you very much,” Lighthizer said at the conclusion of his remarks. “Now we will get down to work.”